A heart-wrenching yet beautiful rendering...

Salt to the Sea by Ruta Sepetys
I feel as if I have read many books set in World War II.
I'm uncertain what the actual number may be, but it feels like a lot.
And I never tire of them. Why?
I think it is because I hope to be part of a critical mass of people who never forget...
that just one despot can kill millions of people in his own country.
Then get two of them together fighting each other (e.g. Hitler and Stalin) and they can also manage to displace and kill millions from many other countries, too!

Also, check out Noami's review at Consumed by Ink.
I feel that between the two of us, a comprehensive picture emerges regarding this book.

The format Sepetys uses reminds me of All the Light We Cannot See by Anthony Doerr, with the alternating viewpoints, each chapter narrated by one of four main characters:
Joana, Florian, Emilia, and Alfred.
There is a cast of supporting characters, also: Heinz, Eva, Ingrid, the Wandering Boy...
Together they represent the millions who were hunted and haunted...
Joana by guilt. Florian by fate. Emilia by shame. Alfred by fear.
Though it could be argued each and every one of the people displaced or killed by either the Germans or the Russians suffered from all four: guilt, shame, fear...and fate.
These four conditions are the result of being hunted and terrorized by psycho-maniacs,
as were these two 'leaders' and the people who perpetrated their evil intent upon others.
It seems very easy for some humans to become misguided savages with no regard for others.            My hope is that as a species, humanity can evolve to a point where a critical mass of individuals have reached a level of spiritual and emotional development that prevents them being so easily controlled and manipulated by psychotic sociopaths. 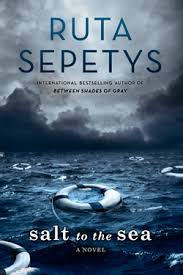 Sepetys is excellent at using few words to denote characterization through actions. Her writing is powerful and intense, yet I found it to be subtle at times. A reader is exposed to many horrors of this war and these peoples' trek to purely survive, without feeling too beaten up by it all. Though when I make such comments, I realize that any one of us reading such a book should feel the heartache, abandonment, guilt, shame, and fear that forced our own ancestors to the fate of such total disorientation and displacement. Regardless of our own specific family's involvement, we are one "human family" and all who preceded us are our ancestors overall. I feel as if few of us know our own family's history well enough to know whether we are descended from some of those who were forced to endure such dire circumstances in the history of our world. I myself felt such a pull as Sepetys divulged some of the political history regarding changing borders before and after World War II. My grandmother had always told me her family was originally from Prussia, and although her ancestors immigrated to the U.S. in the 19th Century, it was due to many of the same circumstances--mainly war: forced conscription to fight and kill other human beings as imposed by similarly 'sick and twisted' tyrants preceding the monsters that were Hitler and Stalin. And, of course, unfortunately, in today's world we still have mass migration of peoples escaping persecution and improbably unsafe and deadly environments created by other individuals savagely determined to kill and destroy. I always shake my head and wonder when we will learn...

One aspect of such circumstances is that in order to survive, one must ironically be willing to kill others as necessary. And we learn that something as simple as leaving an innocent note can inadvertently result in the death of your closest friends.

"The Russians have this region surrounded," she said.
"There are only two escape routes, through the port at Gotenhafen or the port at Pillau.
We're all headed the same way. It will be safer if we travel together."...
She had no idea. It wasn't "safer" for anyone to be with me. (80)


Though in the end, Florian is safer than he might have imagined, mainly due to his efforts to save others.
"It's safer for you to stay with the others," he said.
Safer? he didn't realize.
I was already dead. (47)
Emilia had good reason to feel as if she was already dead. Though she would give life to others in many ways.

Although they make it safely to the port and board the vessel, no one suspects this voyage is doomed. To compound matters, the Nazis overloaded it with roughly 6-7 times the maximum capacity of passengers. As with the Titanic, when it went down, all those below decks were drowned with the ship and all those on deck were immediately dumped into the below freezing water--neither group with a chance of survival. For example, though one girl in a life jacket ended up being pulled into a life boat, she immediately froze to death, unable to get her body temperature high enough to survive.

Alfred is an example of a sick mind just fit for Naziism. He was forever 'composing' letters to his beloved Hannalore in his head...
Some at home did not appreciate my cleverness or abilities. They saw me as a birdie with a troubled wing that should remain close to the nest. They didn't know the truth.
I am quite confident that no one is aware of my ingenuity and objectives.
I just might surprise them all, Hannalore. War is full of duty and decision.
You know I have made that commitment. [Oh, does she ever...]
Yes, life can be lonely for the truly exceptional, darling.
So I build my own nest and feather it with thoughts of you. (151)
And he continues to muse about her...
And now, years later I am still confused by our final conversation. Do you remember it?
I remember it so clearly. I ran onto the sidewalk as they were taking you away.
I told them that half of you was part of the master race.
You stopped in your tracks and whirled to face me. "No," you yelled.
And then you screamed so very loud. "I am Jewish!"
I am certain everyone heard your proclamation. It almost sounded like pride.
And for some reason those words are now caught, like a hair, in the drain of my mind.
"I am Jewish!" (359)

So...as gross as that vision of a hair swirling around a drain is, it isn't as scary as Alfred!
Florian's reaction to Alfred as he quotes Mein Kampf:
I didn't respond. Small hairs on the back of my neck lifted in warning.
This guy wasn't a sailor. He was a sociopath in training. (280)

And as such, a perfect Nazi! Though he was as lazy as he was crazy! :)

Florian, on the other hand, had revenge against Hitler on his mind. At one point they must cross a waterway that is frozen over and Joana nearly falls into the water when the ice breaks. (That event involved a catastrophic loss for their traveling party...) Florian muses:
By grabbing the nurse I had saved her life. Why was she angry? It bothered me that she was mad. It bothered me even more that I cared. But I needed her help.
So I had to say I was sorry. But I didn't have to hold her hand. (158)
True, Florian, you did NOT have to hold her hand...however...you did! :)
I lay back down on the cold tile floor. I reached into my pocket and pulled out her note about the sewing kit. What sort of girl leaves a promissory note in the midst of a bloodbath?
An honest one.
I stared at her pretty handwriting, memorizing it and tracing over her signature with my finger.
I had slipped the drawing back into her suitcase. Yes, I was that good. (171)

Florian was definitely good...at many things, not the least of which was forgery. Though his father had encouraged him to create, he would rather duplicate...
He acknowledged and praised my talent, but wanted me to produce instead of reproduce.
"You are so talented, Florian, why not create something of your own, something
that comes from your imagination? As the philosophers say, 'Life is short, but art is long.' Contribute a piece of art instead of copying others, son."
But I wasn't interested. I loved the idea of restoring old treasures and pieces of art.

And once in a while, I like copying them too.
Ironically, though it may seem more appropriate to create your own art, these 'duplication' skills are what allowed Florian to escape. Though it was without his 'ill-gotten gain,' he ended up with much more valuable things! He observes to Joana,
You seem happy working with the doctor. I bet you were top of your class."
She laughed. "Yes, top of my class, but what does that mean now?
Can you believe I used to study instead of going to the beach?" She shook her head.
"But I do like helping people. and I like being one step closer to my mother." (211)
However, if not for Joana's advanced medical skills, Florian would have died of his wound and the resulting infection!

This is what she thinks as she floats along, first with Alfred for a companion, then alone...until the raft finally beaches on land.

Sepetys does an excellent job of portraying the prejudice and discrimination resulting from stereotyping, even among those who have nothing and are all just trying to survive and make it to evacuation. For example, Eva constantly wanting to abandon Florian whom she assumed to be a deserter, and Emelia due to her Polish heritage! Sepetys describes her years of research and acknowledges the many people who helped her gather information along the way at the end of the book. I am so grateful for those like her who are willing to dig into the past and educate the rest of us about such human tragedies. Let us never forget just how easily we can be turned against one another, for it is still happening in numerous locations around the globe today.

Powerfully written books such as this and Doerr's lead me into seemingly wild philosophical ramblings as posted here. It requires much time and effort for me to attempt to make it all understandable to myself, let alone others! Hence, the reason why I have yet to distill my thoughts into a full review of All the Light We Cannot See, which is, in my opinion, one of the best books I've ever read. However, Salt to the Sea definitely runs a close second to Doerr's work. Fortunately, since this is a library book and another patron has placed a hold on it, I was unable to renew it, and read it in two days during the workweek! So perhaps this library thing is good for more than just discouraging me from buying more books, but also encouraging me to review books in a timely manner! Whereas I can wait a bit to review those I own--they're not going anywhere! :) I am grateful to that patron and can only hope s/he derives just as much enjoyment and gains as much insight as I feel I have as a result of this reading experience!

Of course, the more I learn about rich American businessmen who made literal fortunes off supplying the Nazi regime with all types of goods, the more I believe wars could simply be a function of the 'rich despots' who may not physically hold seats of power, but covertly manipulate policies and politics for no more than their own financial gain, to the detriment of the world's population. Ah, yes, despite the old adage, greed is definitely NOT good! I strongly encourage you to watch this video! Knowledge of such things makes me so angry and sad beyond compare... But this book, this book, is a beautiful rendering of humanity.