Within the past two years I have had the distinct pleasure to revisit live preformances by several of my favorite musical artists: Leon Russell, Abigail Washburn, and Bela Fleck. It strikes me that these favorites might depict my own rather eclectic musical tastes. However, what struck me most about the recent live performances was the difference in their music and concert presence between now...and then. 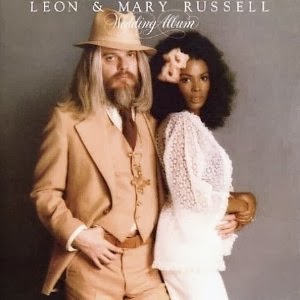 My introduction to Leon Russell was my first official "date" with my ex-husband (Notably one of very few over 22 years!), some 37 years ago. In this concert, he was playing with his wife at the time, Mary Russell. As they both played their respective pianos and sang together, I was blown away! Typically, I prefer to listen to artists in a live concert venue, and these two were simply awesome! Their music felt so spiritual to me...I was so moved by their combined sound! As the years progressed, I listened to more of Leon's recordings, discovering that this was just one type of music he would create and perform over time. He is quite an eclectic musician! You can discover much more about him and his music here. 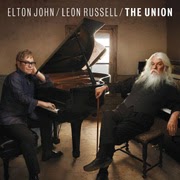 Then, in 2010, he and another of my favorite musicians, Elton John, recorded and released an album entitled The Union! Was I ever excited! I almost wore this CD out listening to it in my car! I loved it, and what a nice "mix" of music on this one--particularly the original compositions.

About two months ago, I received an email regarding an upcoming Leon Russell concert in a small intimate venue located within relatively easy driving distance, and couldn't wait to purchase tickets! Thirty-seven years later and I was just as excited, perhaps even more so, to see and hear this fantastic musician in a live venue again! Although I kept reminding myself that this concert would NOT be a repeat of that memorable experience almost 40 years ago, he was no longer singing with (nor married to) Mary AND I knew he had experienced some health challenges over the past few years, but still...I was surprised by the music and presentation. A LOT more rock and roll covers, much louder, more instruments than just a piano, etc. Many changes... Then Leon was finally alone on the stage with only his piano and I got an enjoyable dose of what I truly consider to be "Leon Russell" music! And I am ever grateful to him for revisiting those same songs, etc. I found his dialogue with the audience truly enlightening, enjoyable, and heartfelt.


This performance did not disappoint me, per se, but I was a bit surprised. It just wasn't what I was expecting. But exactly what was I expecting? A total re-enactment of that concert 37 years ago? I hope not, 'cause that would be totally unrealistic, wouldn't it? But...I loved it so much...

This has gotten me thinking In the "live concert afterglow"... Should I have been surprised by these differences? I don't know, but I was...and yet, as I consider my experience with and reactions to these performances, I chastise myself for seemingly trying to hold onto the past--not being more open to performers' growth and development within their profession and skill set. I am trying to focus on my gratitude for one more live interaction with this "bigger than life" musician and concentrate on what I prefer among his eclectic collection of recordings.

Has this ever happened to you? Have any of your favorite musicians' styles changed over time? Do you ever find it challenging to accept such changes? I doubt I'm alone in this plight... :)

Literary Wives #6: The Wife, the Maid, and the Mistress by Ariel Lawhon 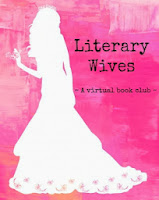 Welcome back to the Literary Wives Virtual Book Club!

Firstly, thanks to the publisher for providing all of us with copies of this outstanding novel to review prior to publication.

My favorite quote: "...the pecking order remained intact. Wife first. Then mistress. Leave the maid behind to clean up the mess." 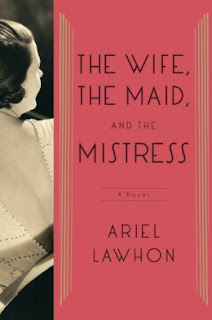 Although not my favorite genre, this book felt a bit like noir as I read it, but it had me enthralled from the start! And that feeling never left me as I progressed to the end! I totally agree with Melanie Benjamin's review--it is definitely a "page-turner"! I really wanted to just sit and finish it in one fell swoop! However, that full-time job and other daily life activities prevented my doing so! I am certain that did nothing to diminish my enjoyment, however.

For me, the plot was the main character in this story. Admittedly, I was fascinated that I loved this book although I felt the characterization to be a bit less in-depth than I typically prefer. I kept thinking to myself as I read, "Wow...none of these women is truly operating in Joe's best interests, are they?"
I initially noted to myself, "Joe is a bastard."
Not too long after that, "Joe is really a bastard!"
And, lo and behold, these insights were proven to be true!
As they say, when you play with fire...

As always with historical fiction, I was delighted to find myself a bit more enlightened about a historical event/situation, as with this "Hoffa-like" disappearance of a Supreme Court judge during the Tammany Hall days of total corruption. Nothing would surprise me about that era in NYC! Naturally, I was reminded of The Godfather in the consistency of relationships based upon raw corrupt political power with a foundation of money and influence as drivers.

All the hosting bloggers contributed questions to be asked of the author, Ariel Lawhon (pictured to the left), as she graciously agreed to grant us an interview. Audra at Unabridged Chick graciously conducted and posted the interview here. I befriended Ariel on Goodreads when only about halfway through the book, I was so impressed!! In addition to being physically beautiful, she is very open to communicating with readers.
Ariel is co-founder of the popular online book club, She Reads, a novelist, blogger, and life-long reader. She lives in the rolling hills outside Nashville, Tennessee with her husband and four young sons (aka The Wild Rumpus). She believes that Story is the shortest distance to the human heart.

Now for the "wifely" questions!

Stella reminded me of Alice in American Wife in the fact that she was also a politician's wife, necessarily intent upon keeping up appearances to enable her husband's career. Though Stella was definitely feistier than Alice (Admittedly, I am still angry with Alice!), I am uncertain whether Alice's rather demure countenance would ever reconcile with Stella's steadfast mode of retribution! As Ariel Lawhon stated to me, perhaps Stella is a reminder that "...we should never underestimate anyone. Everyone keeps secrets." Stella turns the role of wife on its ear by proving that she can play the "boys game" just as well or even better than they can. She organizes her own "crime syndicate" to accomplish the unthinkable. Males may think they are controlling their women, but not always...even way back then!  :) Maria is portrayed as the "model"/"perfect" wife to Jude, however, her own well-intentioned meddling into his affairs proves to be very dangerous for both of them. I rather disapprove of Ritzi's abandonment of her wifely role and then reappearing out of the blue, pregnant with another man's child, and expecting to be accepted and welcomed back by her husband. Really? I realize it's possible, but I doubt I could be that forgiving. Frankly, after three years, I'm relatively certain I would have filed for divorce based upon abandonment and developed a new life. In my opinion, she is VERY lucky, in so many ways.

2) In what way does this woman define "wife"--or in what way is she defined by "wife"?

Unfortunately, it seems that Stella is totally defined by her role as wife. She is intimidated by Joe to "behave" and do as she is told, unless she face his wrath. I felt Joe's capacity to dole out abuse in any form was never far below the surface in their relationship. It seemed that as long as she followed his dictates and "kept up appearances," just as her mother desired her to do, she would be left relatively unscathed by him or his cronies. However, as did Catherine in A Reliable Wife, Stella actually uses her role as the ever-dutiful wife to reap retribution upon her husband. As noted above in my favorite quote from this book, the hierarchy seems to hold with the other criminals in Joe's world--the maid can be threatened, coerced, and used, as is the mistress, of course, but the wife is relatively untouched by such measures, except from her own husband! Now that's some irony, is it not?!? Speaking of irony, although Ritzi appears to be the one of these three women the least disposed to becoming a mother, and pregnant by someone other than her own husband, is the only one to live to bear a child.

Don't forget to check out the others' reviews:


Emily of The Bookshelf of Emily J

Emily is a Ph.D. student studying professional communication who has worked as an editor and a composition instructor. She is the mother of two little girls and loves chocolate and ice cream. The thing she wants most right now is a day in bed with a good book, preferably fiction.


Ariel of One Little Library 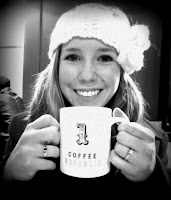 Ariel is an editorial assistant at a Southern California publishing house. A literature enthusiast, she likes heroines full of gumption and conflicts fraught with ethical dilemmas. Her favorite book is and always will be Jane Eyre. 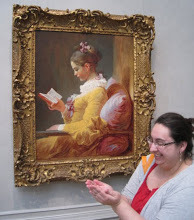 Audra is a 30-something married lesbian with a thing for literary fiction and historical novels, classic noir, and vintage favorites. She lives in Boston with her wife and works for a non-profit. She loves interesting heroines, gorgeous prose, place as character, and the occasional werewolf.


Carolyn of Rosemary and Reading Glasses

After five years in graduate school, Carolyn O is on hiatus to be the read-at-home-parent to her small son. She works as an editor, writer, and proofreader on the side, and hopes to return to teaching soon. She loves used bookstores, early modern drama and poetry, feminism, and anything Joss Whedon creates.


Cecilia of Only You 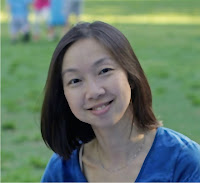 Cecilia teaches writing and self-presentation skills to international professionals by day and night (the curse of time zone differences) and in between squeezes in some reading and writing of her own. Her reading tastes are pretty eclectic, though she loves literary fiction and memoir most of all, and works by women and international writers in particular. The best part of her day is the end-of-the-day book club that she shares with her 9-year-old son.

And the newest addition, Kay of whatmeread

Kay is a long-time professional technical writer who has taught composition and technical-writing courses at the college level. She loves reading all kinds of books. When she recently got an iPad and spent some hours playing games, her husband thought she'd undergone a personality change. But soon she was back to reading. She is the secret author of three (sadly unpublished) trashy romance novels.

The February 1, 2014 book is
The Inquisitor's Wife: A Novel of Renaissance Spain
by Jeanne Kalogridis