An e-short story by Rachel Joyce

A Faraway Smell of Lemon
by Rachel Joyce 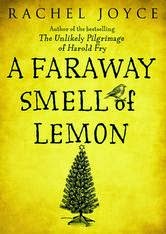 In actuality, I only read this e-short story because I received an email about another author's e-short story having been released this morning. Once I entered my Kobo account (Yes, there is a source for even e-books other than Amazon...), I realized that I had already purchased and downloaded that e-short story, but decided to purchase and read this one, realizing this author had also written The Unlikely Pilgrimage of Harold Fry which our book club will be reading and discussing in January of 2015. I really wanted to acquaint myself with Joyce's writing style... (And I do have a confession regarding e-publications...unless it's a short story that I can only procure in electronic format, I don't. I read one e-book and I prefer the heft of the physical book in my hands. Though I do get the convenience factor of e-books...)

I found Joyce's writing style to be very straightforward, yet revealing the "full story" gradually through the protagonist's interactions with and thoughts about others. Binny was a sympathetic character to whom I could relate, especially her aversion to cleaning house! ;) You can assume Binny has probably experienced a tough time developing romantic/interpersonal relationships since she is a self-described "giant" who must duck to clear doorways and is "big-boned" as her mother told her throughout her childhood. Typically, in our society/culture, larger women are not viewed as "attractive" or physically acceptable to others as partners.

I believe Binny's aversion to housekeeping was one symptom of her depression, resulting from repressing her own emotions, which becomes clear as the story unfolds. Her parents had died not so long ago, but she refused to cry or show her emotions at that time, then Oliver, her current "partner," ups and leaves her, confessing his affair with another woman who is now pregnant. Although Binny is beside herself, true to form, she is still willing herself to remain stoic, refusing to deal with the emotional turmoil.

Rather than dealing with her emotions by expressing them verbally, instead she chooses to throw plates, covering her kitchen floor with the "thousand blue ceramic pins" that were formed, then she "swept the splinters of china into her hands and squeezed until she felt them spike the skin." (This process reminded me a bit of "cutting" behaviors that some people do to "relieve" themselves of emotional overload/misery.)

It was amazing to see how Binny reacted to the cleaning shop worker...and finally obtained some relief. Proof that none of us ever knows when we might have significant impact upon someone else's life in the seemingly most insignificant interactions.

I highly recommend this story. Have you read it? Or have you read anything else she has written? What was your reaction?

Our tenth read for the Literary Wives online book discussion group is a collection of poems about various wives of famous/infamous men throughout history, including folklore and mythological heroes, literary characters, etc., as well as some sisters and Anne Hathaway! This book sent me researching some mythological characters for context, since I never was much into mythology.

Having not read much poetry for many years, I was uncertain what to expect. Though this collection did make me laugh out loud once in awhile, overall, the language and imagery was a bit too crude for me...and I though I could handle crude just fine! :

There are 30 poems ranging from the easily recognizable, like "Little Red-Cap," to the somewhat more obscure, such as "Mrs Aesop" or "Circe." Some of the titles are quite humorous and made me chuckle: "Queen Kong," "Elvis's Twin Sister," "Mrs Beast," and "Mrs Quasimodo." There is violence in several of these poems that simply grossed me out. However shocking some of the language and/or imagery was for me at times, there were also some moments that me stop and consider, or just laugh out loud! I found "Mrs Sisyphus" to be the most humorous of all.

From the first poem:

Lesson one that night,
breath of the wolf in my ear, was the love poem.
I clung till dawn to his thrashing fur, for
what little girl doesn't dearly love a wolf? (p. 3)

At which point I stopped and exclaimed aloud, "What?!?" Little girls LOVE wolves...well...okay...that's a bit different perspective. As you may well have guessed, this excerpt was from "Little Red Cap." And trust me, she did exact revenge for grandma's untimely demise!

"Mrs Quasimodo" was a particularly "ugly" poem, in my opinion. (Pun intended, I suppose.) He leaves her for someone "well formed" and she takes revenge by dismantling the bells.

I sawed and pulled and hacked.
I wanted silence back.
Get this:

When I was done,
and bloody to the wrist,
I squatted down among the murdered music of the bells
and pissed. (p. 38-39)

All righty then! Mission accomplished, eh?!? ;) I felt the word choice "murdered music of the bells" was quite apt and depicted her intent accurately. I could easily suspend my disbelief to envision this scene.

I found "Mrs Midas" quite moving. I had never truly considered how the "Midas touch" turning
everything to gold could destroy a person's (Mr. Midas's specifically) life and relationship.

I made him sit
on the other side of the room and keep his hands to himself.
I locked the cat in the cellar. I moved the phone.
The toilet I didn't mind I couldn't believe my ears:

how he'd had a wish. Look, we all have wishes; granted.
But who has their wish granted? Him.

...He tried to light a cigarette; I gazed, entranced,
as the blue flame played on its luteous stem. At least,
I said, you'll be able to give up smoking for good. (p. 12)

She made him move out and he eventually became "thin" and "delirious." Mrs. Midas states

What gets me now is not the idiocy or the greed
but lack of thought for me. Pure selfishness. I sold
the contents of the house and came down here.
I think of him in certain lights, dawn, late afternoon,
and once a bowl of apples stopped me dead. I miss most,
even now, his hands, his warm hands on my skin, his touch. (p. 13)

Ending with a bit of irony, that one! And how much does she lack perspective and understanding? I'm rather assuming this man simply thought to make his own and his wife's lives much more enjoyable and less stressful with more money and riches. Perhaps he was only thinking of himself, but I could envision someone believing they would make their partner more comfortable with more money obtained by selling the gold. And I doubt he foresaw being granted this peculiar ability as the granting of his wish, but rather just a pile of treasure? Alas, we will never know...

I could continue giving you bits and pieces, but really, if you're interested, these poems do give you moments of pause. They're not exactly to my taste, but that is just me. You may find them all utterLY fascinating and delightful! One thing is for certain, they are a bit deeper than I expected, and I certainly appreciate that. Duffy's use of language is captivating, to say the least!

To say these wives were feminists is perhaps a drastic understatement. Most of them exacted revenge in the most vicious ways, in my opinion. Mental note: do not "cross" any of these women, 'cause they can be evil and wicked! At the very least most of them berate, criticize, and make fun of their husbands And there is certainly no need to worry about these females, 'cause trust me, they can (and will!) definitely take care of themselves, and woe to the males upon whom they unleash their cruelty! For many of them the experience of being a wife meant they felt they were married to "bumbling idiots" or selfish pricks, or both! Overall, I did feel these poems expressed to some degree how living with another person can become a trial on certain days, once the thrill of a new relationship has settled into daily routines. However, there are coping mechanisms other than murder, etc., that can be employed to help alleviate such frustration! :)

I felt many of these women were only wives until they felt they couldn't stand living with their husbands any longer. Perhaps the more deadly ones have lodged in my mind, but overall, I would say they only remained wives as long as they felt loved or at least some hope of being loved. And by love I mean receiving respect and consideration, not just sex. I wholeheartedly agree with this depiction of a marriage/relationship, which I consider to be realistic. I would never again remain committed to a relationship that wasn't based upon mutual respect, consideration, empathy, and caring. I felt most of these women were desiring these same qualities in their mates.

Join us Monday, October 6, for our reviews of Wife 22 by Melanie Gideon.
It sounds like an interesting premise! 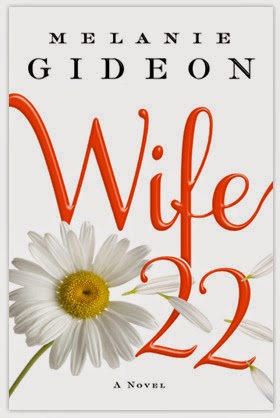