What is that building with the birdie sailing back and forth?

The Embassy of Cambodia
by Zadie Smith
This is a 70-page novella published on the New Yorker website in February, 2013.
It is available to read for free! 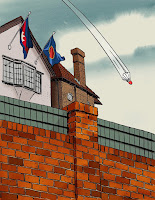 I have read On Beauty and Swing Time by Zadie Smith
and was cnurious to read another of her books.
I am honestly undecided about her writing.
I enjoyed both On Beauty and Swing Time,
but I wouldn't consider either book as a "favorite read."
Although I rarely read ebooks,
I felt this is short enough I could
survive reading it in the digital format. :)

Fatou passes this building for the first time as she heads to the heated pool in the health center adjacent to the Embassy. This is, as far as most people are aware, the only embassy built in a suburb, Willesden, and not located in the center of the city. The people of Willesden being more "prosaic" than "poetic":
I doubt there is a man or woman among us, for example, who--upon passing
the Embassy of Cambodia for the first time--did not immediately
think: 'genocide.' (p 3)
This made me stop and consider, since that was one of the first words that crossed my mind...

We learn that Fatou is a chambermaid who has taught herself to swim while at the Carib Beach Resort in Accra. No tourist ever ventured on the trash-covered beach at the Resort and employees were not allowed to use the hotel's pool. So Fatou rose and sank with the water's motion in the early morning hours each Sunday as she taught herself to swim in this "cold and treacherous sea." The only way she is able to enter the health center and swim in their pool is by using free guest passes stolen from her employer, the Derawals. But she can only do this on Mondays as both Mr. and Mrs. Derawal are both working on this one day each week.

Badminton is being played inside the embassy's high walls with only the shuttlecock visible as it arches over the net with each hit: "Pock, smash, Pock, smash." The only arrivals to the Embassy that Fatou has ever seen are white males with backpacks--no one who looks to be in the least "Cambodian." She assumes they are seeking visas. Although a basketball goal was newly visible above the Embassy's high wall, there never appeared to be anyone playing basketball--only the "Pock, smash, Pock, smash" of badminton play could be heard.

Fatou has confirmed her assumption that she is not actually a slave upon reading an abandoned article describing the life of a Sudanese girl kept in a rich man's London house   as a slave. It was her father, not a kidnapper, who took her from the Ivory Coast to Accra in Ghana at age 16, where they both obtained work at the same hotel. From there he sent her to Libya then on to Italy at age 18. And although she has not seen her passport since her arrival, nor is she paid a wage by the Derawals since that money is retained by them as payment for her room and board while living there, she can come and go as she pleases. She is not restricted to the Derawal residence. For example, she meets a friend, Andrew, on Sunday mornings to attend church and he treats her to coffee and cake afterwards at a Tunisian cafe.

Andrew is educated and Fatou feels she can have "deep" discussions with him, unlike anyone else in her everyday life in London. One day they discuss the Holocaust versus the genocide in Rwanda, and the resulting worldwide knowledge. Fatou expresses her belief that Africans "have more pain" than other ethnicities in the world, e.g. the Chinese. They briefly discuss the Khmer Rouge policies in Cambodia--forcing all the New People (who live in cities) to move to the country and become "Old People." Andrew explained you would be killed for wearing glasses as that implied you "thought too much."

Following Fatou's baptism and conversion to Christianity, she realizes her daily life is still the same routine. She emphasizes that she can recognize the "Devil" in people, rather than concentrating on "God's love." We learn that a Russian raped her while working in a hotel, so she is not a virgin...

Fatou performs the Heimlich maneuver to save one of the four children in Derawal household from choking, and then is fired within the next day or two. For no apparent reason other than they need "a housekeeper who cleans properly," not a nanny, and she pays too much attention to the children.

Fatou calls Andrew, the only other person she knows in London, and he will meet her four hours later. They will sleep in shifts, etc., as she moves into his apartment. He assures her he respects her and it will all work out.

Fatou could speak English and some Italian, and was obviously more well-read than you might assume, considering her background. Though her life was obviously a very lonely one with no one but this Andrew to help her at all while in London. No mention was made of her father, so we assume he simply sent her to a place where he believed she could have a better future.

I am always so sad when parents feel they must separate themselves from their children to possibly provide a better life for the children. I just feel so grateful not to have ever been put in a similar situation, as a child or a parent...

I felt this story was at the very least poignant and bittersweet.
Perhaps Fatou is not technically a "slave" in the strictest sense of the word,
but her life doesn't appear to be very different in many ways, at least to me.

Have you read this?
What are your thoughts?

I don't believe Zadie Smith's writing is ever particularly 'cheery' or entertaining,
but she does make me think and consider...