I don't actually remember exactly how I first discovered the Literary Wives, but I immediately started reading the books and participating in the discussions once I had.
I was fascinated by the premise, since I had also noticed that many books
included "wife" or "wives" in the title and already owned quite a few.
Actually, it was this "club" that finally motivated me to establish a real blog!
My first blog posting on June 1, 2013, was the review of the second book in this series,
The Paris Wife by Paula Mclain. (Yep! You can tell it was my first! lol)
I simply linked to my Goodreads review for the first book, American Wife by Curtis Sittenfeld and commented on the others' blogs.

Imagine my thrill when later asked to become one of the co-hosting bloggers for this group!

(In case you're wondering, yes, it was indeed "happy dance" time...and I did just that!!)

The Literary Wives virtual book club "meets" every third month/once per quarter to discuss a book
with the word "wife" or "wives" in the title or
a book that discusses marriage but whose title lacks either of these words.
We are particularly interested in the way(s) in which wives are portrayed in literature.
We try to answer this question:

What does this book say about wives or about the experience of being a wife?

Each of us extends our discussion into more specific areas we can
personally relate to which makes for enlightening comparisons!
I believe this is more pertinent for me due to my 'longer life experience'
or perhaps 'advanced age' is a more realistic term!


We read books across genres and hope to generate discussion about each title.

Check out our Facebook page! And PLEASE, if this interests you,
read with us and at least participate in the discussions,
or post your own review and link it to the FB page and any or all of our blogs!

Other books describing marriage/husband-wife relationships:
Circling the Sun by Paula McLain
I admit it took me a bit to accurately place the couples in this book--most all of
them who were actually married to one another were totally unhappy and
amazingly dysfunctional, while those couples who appeared to truly be 'in love'
and happy were NOT married, but simply in 'extramarital' affairs'! Seriously,
nearly ALL of them! What was fascinating was to learn how vicious the gossip
could become and actually "ruin" people, yet, they were all doing this!
Such hypocrisy! Beryl Markham's life was fascinating, but the couples described
were just as fascinating! At least Beryl was realistic about her love for Denys and
his love...for her...or Karen...or anyone else.
My Son's Story by Nadine Gordimer
A marriage set in Apartheid South Africa. A husband who defies Apartheid laws,
loses his teaching position, and becomes a well-known and sought-after speaker
for the protests in his region. A white female aide worker assigned to his case
while in prison, becomes his lover. What is the impact upon the children?
And the marriage?
Golden Boy by Abigail Tarttelin
Add to the usual marriage relationship the additional challenges represented by
a child born intersex.
Everything I Never Told You by Celeste Ng
A study of parents imposing their own wants/desires upon children...never a
good thing, in my opinion! It's tough enough being a kid! And how do those
unrequited desires affect the marriage?
Moon Tiger by Penelope Lively
An unusual woman in unusual times. Claudia is unique in most every way for
the period of World War I: a war correspondent wandering the fields of battle;
loses the unborn child fathered by the only man she truly loved (other than
her brother Gordon); and having a life-partner (not a spouse) as the father of
her only child. She lived life on her terms and her terms only! 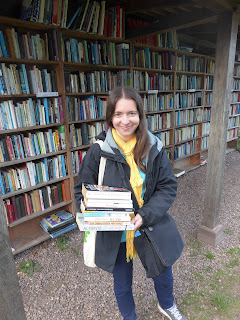 Rebecca relocated from Maryland to England 15 years ago.
She’s a freelancer, proofreading science articles and writing book reviews for BookBrowse,
Bookmarks, Shelf Awareness, the Times Literary Supplement, and more.
Between work, blogging, and volunteering at the library, she is knee-deep in books,
and most often to be found reading with a cat on her lap.
She and her husband have just bought their first home and
plan to make a library room with built-in shelves and a window seat.
And the two veterans:
Naomi of Consumed by Ink 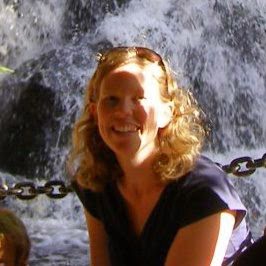 Once upon a time, Naomi worked as a biologist, math tutor, and early childhood educator.
Since then, she has been happily reading bedtime stories to three eager listeners,
and hopes this will never change.
She loved traveling around the Canadian Maritimes with her family,
visiting the used book stores and bakeries.
Kay of whatmeread

Kay is a long-time professional technical writer (now retired--yippee!)
who has taught composition and technical-writing courses at the college level.
She loves reading all kinds of books.
When she recently got an iPad and spent some hours playing games,
her husband thought she'd undergone a personality change.
But soon she was back to reading.
She is the secret author of three (sadly unpublished) trashy romance novels.