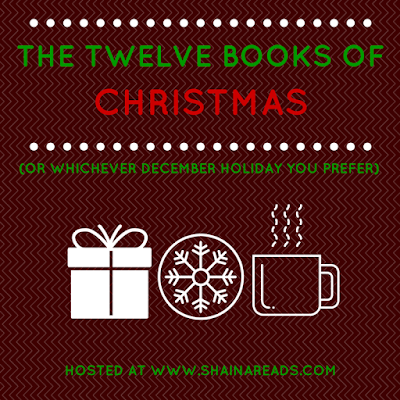 All books must be at least 100 pages in length and must be read between
December 1st and December 31st!
That's it!  How simple!
With extra time off work at the end of the year, I hope to reach this goal!

#1 The Kitchen God's Wife by Amy Tan (12-7-15)
The Twelve Books of "Christmas"/December, #ReadMyOwnDamnBooks, Historical Fiction, and The Classics Club. (Whew!) :)

#3 Birds of a Feather by Jacqueline Winspear (12-14-15 blog post to come)
The Twelve Books of "Christmas"/December, #ReadMyOwnDamnBooks, and Historical Fiction.

#6 Messenger of Truth by Jacqueline Winspear (12-26-15 blog post to come)
The Twelve Books of "Christmas"/December, #ReadMyOwnDamnBooks, and Historical Fiction.  **ONE OF MY FAVORITE BOOKS EVER!

I read these next three in preparation for the Little House Read-Along hosted by myself and Bex of An Armchair by the Sea, to begin in January 2016!! :) There will be no blog posted reviews until October-December of 2016 since that is when we are 'technically' scheduled to read these for the Read-Along! I was too curious about these to wait! :) I also felt it would provide some background knowledge for me and these were good for that. In short, I'm glad I read these now.

#7 West from Home: Letters of Laura Ingalls Wilder to Almanzo Wilder, San Francisco 1915 by Laura Ingalls Wilder, edited by Roger Lea MacBride
(12-27-15)
Laura's enthusiasm comes through in her letters to Almanzo! The details of the Panama-Pacific International Exposition are fascinating! I was so impressed with the technology they used!

#8 On the Way Home: The Diary of a Trip from South Dakota to Mansfield, Missouri, in 1894 by Laura Ingalls Wilder (12-27-15)
A very straightforward account of their days during this trek. What struck me most was the international/cultural diversity of their fellow travelers. I only recently became much more aware that the "Wild West" was also settled by immigrants to the U.S. I guess I just always thought of the 'cowboys' as the settlers in the past... Books that have helped open my eyes to this reality are The Shoemaker's Wife by Adriana Trigiani and Jam on the Vine by LaShonda Katrice Barnett (blog post under construction).

#9 A Wilder Rose by Susan Wittig Albert (12-28-15)
Firstly, I love Albert's writing! I have read several of her books in the China Bayles series and own all of them, and am anxious to read them all in 2016, straight through...as soon as I've read all the Maisie Dobbs series! Cannot wait! :) With that said, this book reads as fiction, but is based upon facts as recorded by both Laura Ingalls Wilder and her daughter, Rose Wilder Lane. Although the 'advertised'/blurbed story line is the controversial authorship of the Little House series of juvenile historical fiction, it is also (and I felt foremost) a recounting of Rose's adulthood and the rather contentious mother-daughter relationship between these two women. It is fascinating reading and I highly recommend it if you are at all interested in the subject matter.

#10 Snow Treasure by Marie McSwigan (12-30-15 blog post to come)
I first read this is a child, probably age 10-12. All I could really remember was that these children were very brave and courageous! It still rang true for me these decades later. Anxious to post my review, then it goes to my grandchildren for their enjoyment! The Twelve Books of "Christmas"/December, #ReadMyOwnDamnBooks, and Historical Fiction.

#11 Rules by Cynthia Lord (12-31-15 blog post to come)
Oh, my goodness! Such a wonderful book! I am so glad it received all the awards it has! The Twelve Books of "Christmas"/December and #ReadMyOwnDamnBooks.

#12 Say Good-Bye (Vet Volunteers #5) by Laurie Halse Anderson (1-1-15)
I have been wanting to read one of these and was able to purchase this one very cheap at our library sale. Can't wait to read, review, then pass along to my grandchildren. Had to cheat a bit since I got sick this week, but only one day late for the last book. That's not so bad, right? I'm pretty sure Shaina will be all right with it! :) The Twelve Books of "Christmas"/December and #ReadMyOwnDamnBooks.