The Stranger by Albert Camus

This is the book I read as the Classics Club Spin #5 as selected on Monday, February 10. And, I'm rather excited that I was able to have read it by April 2, unfortunately I lacked the necessary time to complete the posting! Oh well...life happens sometimes! 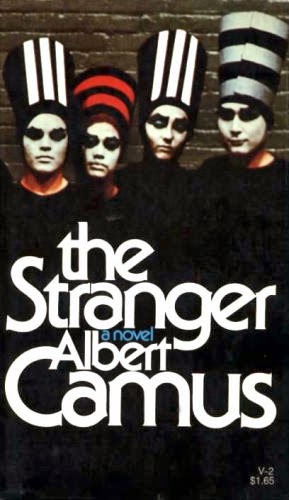 I had mentioned I was a bit intimidated by this book for many reasons, though it was not all that intimidating for me in the actual reading! (That is usually how it works it, is it not? The anticipation can be so much more intimidating than the reality of the action...) The picture to the left depicts the cover of the edition I read (Vintage Books Edition, September 1954). My initial reaction to this picture was "Huh?" I had no idea how this picture could connect to a story of one man shooting another. However, having completed reading it, I immediately decided this is one of the most "bizarre" literary reads I have encountered. And I was able to make my own connection; to me the cover represents this bizarre "joker-like" collection of people with little to no real personal connections among them. There appeared to be no apparent reason or rationale behind the characters' actions or behaviors. One parallel for me: Meursault reminded me so much of Nick Carraway (the narrator) from The Great Gatsby by F. Scott Fitzgerald. Like Nick, Meursault is quite the "gutless wonder" in that he appears to just follow anybody anywhere and never has an independent thought, or action/behavior, that is truly his own. Several reviewers call Nick an "unreliable narrator," but I consider him to be an idiot who just follows along...always! As I felt about Meursault...

For example, Raymond, a neighbor in his apartment building, who has a terrible reputation and is rumored to be a pimp, suddenly befriends him and asks for his help to lure his mistress back to him so he can beat her up one final last time as payback for her cheating on him. Now most thinking people would at least question Raymond as to his desire to beat on a woman, etc., but no, not Meursault! Having himself heard the violence as Raymond beat on his mistress in the building and chosen not to report it, Meursault agrees to become Raymond's friend and participate in his scheme. At this point I'm thinking "What are you thinking?!? Anyone with a brain would turn and walk away from this guy as fast as possible!" He is mean and brutal--nothing but trouble! And consider the consequences that might result from aligning yourself with this "joker"! (Refer back to cover image above! :))

But not Meursault! He does whatever Raymond wants him to do, as in fighting the "Arabs." This group includes Raymond's mistress's brother. I felt Camus persisted throughout the book to refer to "Arabs" without ever naming any individual within that group as a reflection of rampant prejudice, discrimination, and even hatred, as being evidenced by the violence and cruelty exhibited by Hitler's Nazi regime toward Jews and other "ethnic" groups at the time. It is this unprecedented slaughter that encouraged Camus and other philosophers at the time to believe there was "no purpose or discernible meaning" to mankind's existence in the world. As Meursault watches the sky from his prison cell he thinks:

"...for the first time,...I laid my heart open to the benign
indifference of the universe. To feel it so like myself, indeed,
so brotherly, made me realize that I'd been happy, and that I
was happy still. For all to be accomplished, for me to feel less
lonely, all that remained to hope was that on the day of my
execution there should be a huge crowd of spectators and that
they should greet me with howls of execration."
This represents Meursault's "coming to grips" with the idea of his impending doom, in my opinion.

And exactly how did Meursault become a "doomed man"? That, in and of itself is quite "bizarre" and would require much space to describe. Suffice it to say that he inadvertently (or not) shot and killed one of the "Arabs" and his case was tried immediately preceding a case of parricide (a father accused of killing his own son), to which the prosecutor linked his crime! (I did mention "bizarre," didn't I?) Final verdict? Meursault is sentenced to death...by guillotine! 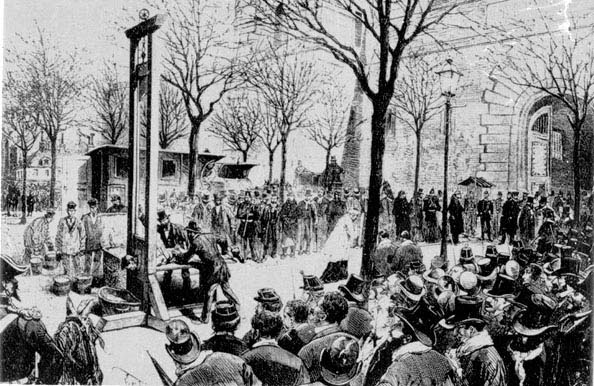 I was glad to find SparkNote's analyses noted Camus believed his "absurdist philosophy implies that moral orders have no natural or rational basis" in humanity. (By the way, I gave myself points for having used the word "bizarre" to describe this book...after all, Merriam-Webster lists bizarre and absurd as first synonyms! Self-congratulations were appropriately meted out at that point!) I would disagree with Camus to this extent; if humanity overall has no natural inclination toward morality and ethical behavior, why exactly are we put upon this earth? Perhaps to "learn" such behaviors? I don't believe any one person KNOWS, but it is interesting to consider. Personally, I believe we do reincarnate throughout lifetimes with the overall goal of perfecting our soul. This philosophy gives me unending hope for myself, as well as all mankind, and that is what matters most to me.

SparkNotes states that Camus did not approach the world with "moral indifference," rather "he believed that life's lack of a 'higher' meaning should not necessarily lead one to despair. On the contrary, [he] was a 'persistent humanist' noted for his faith in man's dignity in the face of what he saw as a cold, indifferent universe." I would definitely agree with this; I feel it is humanity's "calling" to deal with daily life to the very best of our ability. I do not believe this requires any belief system including a deity or deities/gods, nor a rigid structure, but simply attention to our daily interactions, with 'purposeful positivism' (I just conjured this term or perhaps simply remembered it from elsewhere!) as expressed through mutual respect, acceptance, kindness, appreciation, and unconditional positive regard for all beings. Such a philosophy for daily living requires much "living in the NOW," and attention to our attitudes and intentions, which spread either positive or negative energy throughout the Universe, and it is the Universal energy flow which determines alignment or disjointedness. Not sure that was exactly Camus' belief, but it is mine and I feel it aligns with his philosophy to a great extent. 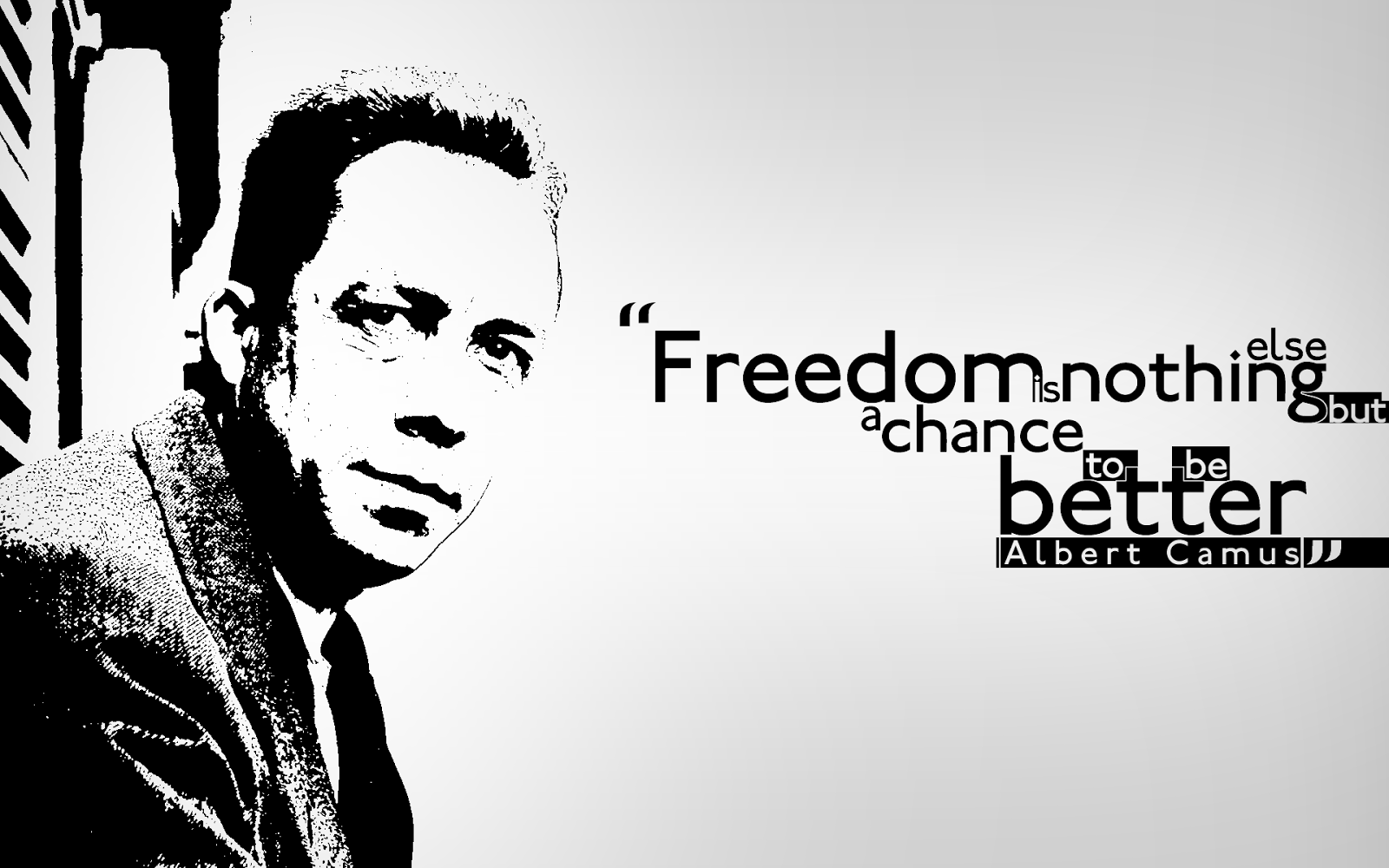 I am very glad I took the time to read this classic work and did a bit of research into Camus' philosophy. It never hurts to have a bit better understanding...of...well, anything, really! What have you read recently, or long ago, that impacted your philosophical understanding of life? And doesn't everything we read do that to some extent?