The Crane Wife by Patrick Ness

I wish to begin by thanking Penguin Press for sending each of the Literary Wives co-hosting bloggers a copy of this book in exchange for an honest review. It is always nice to have such cooperation from the publisher! 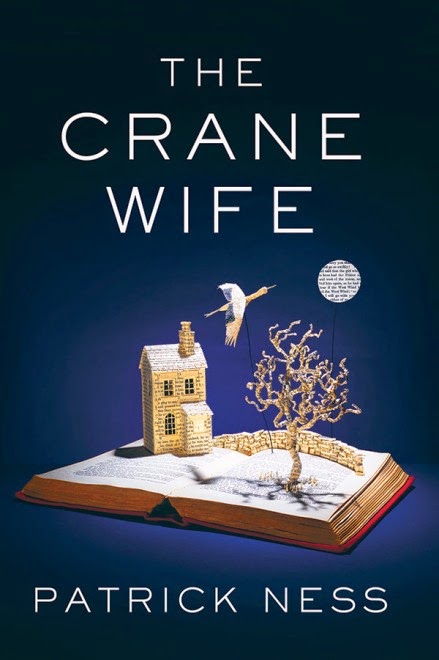 Check out the other bloggers' reviews as well:
Emily of The Bookshelf of Emily J

I was so totally enthralled throughout the first 25 pages; Ness's use of language can be so lyrical and I literally felt as if I was George...standing in his frozen garden...inspecting a crane...up close and personal! A couple of my favorite passages:

But if it wasn't a dream, it was one of those special corners of what's real, one of those
moments, only a handful of which he could recall throughout his lifetime, where the
world dwindled down to almost no one, where it seemed to pause just for him, so that
he could, for a moment, be seized into life. (11)

But this, this moment here, this moment was like those, and more so. The gravely injured
bird and him in a frozen back garden that could have been the borders of the known
universe for all he knew. It was in places like this that eternity happened. (12)

I physically slumped a bit in my chair as I read this: 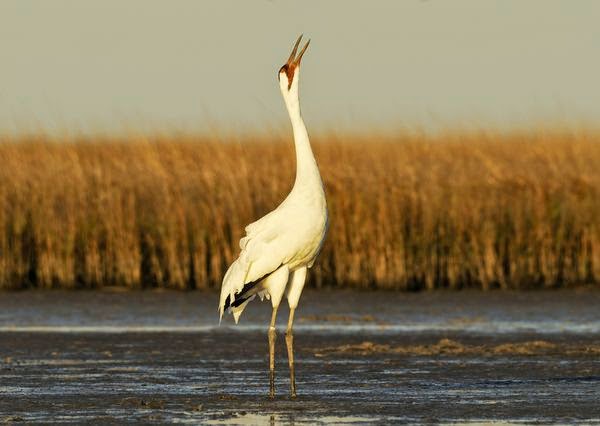 ...the crane leaned back its neck, its head
reaching to the sky, and it opened its beak
to call.

But it didn't call. It gaped silently at
the moon, as if breathing it out.

The crane's full weight suddenly pressed
against the man's chest. That long neck
fell forward like a ballerina's arm accepting
applause, and it wrapped around him, its
head hanging down his back, as if
embracing him. Only the heaving of its
narrow breast told the man that the bird was still alive, that in its exhaustion it had given itself
into his keeping, that it would hand over its life to the man if that was what was required.

I typically try not to quote such long passages in a review, but felt Ness's words so beautifully engaging to me that I just had to share!


Unfortunately, this book proved that my intuition and research before choosing a book to read is usually spot on; I would not have chosen to read this book had it not been selected for this book discussion. My main hesitation was in the fact that the author's previously published books did not hold much appeal for me, upon reading the summaries and skimming some reviews. But as I typically do, I did my very best to hold no expectations as I began to read... My attitude is always that I want my mind to be open to any and all possibilities as I read, allowing the author to take me where s/he wants me to go! Fun!!

As the book progressed beyond this first section, I was less and less enthralled. For whatever reason, the book overall just didn't resonate for me. I loved the idea, but the various sections of reading did not combine to create what I felt to be a truly cohesive whole story. I wonder if I could have read this in longer time segments (each 2+ hours long rather than many sessions of only 20-30 minutes in duration) if that might have helped alleviate the choppiness and disjointed feelings I experienced in reading the book. Perhaps... I admit to re-reading that initial section of 25 pages or so several times as I progressed through the remainder of the book, just to remind myself of my initial pleasant surprise at the beautiful language and the visceral reactions it prompted.

The protagonist, George, is obviously not what I would term as a necessarily "well-accomplished" man. He appears to be a productive and reliable business owner, though he is not assertive, allowing his shop assistant, Mehmet, to literally run the show in most situations in his own store! Even when he realized Mehmet was not offering optimal customer service, etc., rarely did George intervene. He was, what I would probably term a "gutless wonder," though at no time did I sense any malice in him toward others, and that I could very much respect. He definitely lacked self-confidence and I believe, considered himself a failure overall, though he obviously had a well-established life in many ways: a relatively good relationship with his daughter; an especially close relationship with this grandson; a steady income; but perhaps no truly "creative" outlet.

I admit to becoming a bit weary of the volcano and crane sections, they seemed very repetitive and sexual and I became bored with them. I did manage to link the seeming hopelessness of this relationship with that of George and Kumiko's relationship--as he drew closer to her he needed to "possess" more of her and know more details about her, which placed their relationship on the seemingly same doomed pathway as that of the volcano and crane. Which segues nicely into noting a main theme of this story...obsession and "possession" within relationships. For me personally, this same feeling was more a function of age and immaturity than anything. I felt this way when I was younger, in my first marriage, for at least the first 7-8 years, then I relaxed and believed that I didn't need to know where my spouse/partner was every single minute of every day, nor did I need to know what he was thinking all the time--I either trusted him or I didn't. (Although that trust proved to be misplaced, I still believe trust and mutual respect must form the foundation of any relationship for it to be effective.) In my later years, I am fortunate to have met a man with whom I have created a much more fair and equitable relationship than was my first marriage. And for me, personally, each of us is much more autonomous, which feels more respectful and less "possessive."  I am ever so grateful and appreciative to have experienced this type of intimate relationship at least once in this lifetime!

Interestingly, we never do get to see George and Kumiko officially become "husband and wife," though in many ways they had already established that same type of intimate relationship, sans sharing the same household. In my opinion any relationship is strained to the utmost by the mere act of living together, whether romantic, platonic, whatever, the constant daily irritations and frustrations can create enough dissonance to destroy any good relationship. Unfortunately, it is virtually impossible for George to allow Kumiko the autonomy and privacy she needs to retain her "identity"/"secrets," thereby destroying their relationship. It is his "need to know" that interferes so irrevocably with them as a couple. So perhaps this actually demonstrates more the need to be a "husband" than a "wife"? Or perhaps it is demonstrating the fact that as our society/culture continues to evolve, I believe these gender-based role titles are less and less pertinent or necessary. A partner is a partner is a partner, regardless of the sex of a person. But is it wise for Kumiko to keep her true identity a secret from her partner? Is that the basis for a good marriage? Can she truly be a "wife" if she is willing to hide such information from her "husband"? I think not...

What I did find interesting in this book, was the relationship between George and his ex-wife, Clare. It is obvious she still cares for him and about him, and they seem to have a relatively friendly and effective relationship, though Clare appears to have doubts about Kumiko and her relationship with George, much as his daughter, Amanda. Though I had a distinct impression that both of them were simply expressing their own jealousy at another person commanding so much of George's time and attention. Although Clare had moved on and remarried, I'm uncertain of her willingness to grant George that same freedom. And poor Amanda was quite a mess with her own interpersonal relationships--unable to establish effective friendships, and still rather obsessed with her ex-husband, though she is the person who ended their marriage. However, Kumiko was able to place anyone "under her spell," as it were.

I don't believe Kumiko was at all defined by "wife," in fact, I was extremely confused by her acquiescence to become engaged to George, though I believe she was unaware of the implications for cohabitation, etc., as a result. I felt her inexperience with "living together" prevented her from realizing the lack of privacy, etc., that can and does result, therefore, endangering her ability to keep any secrets from George. 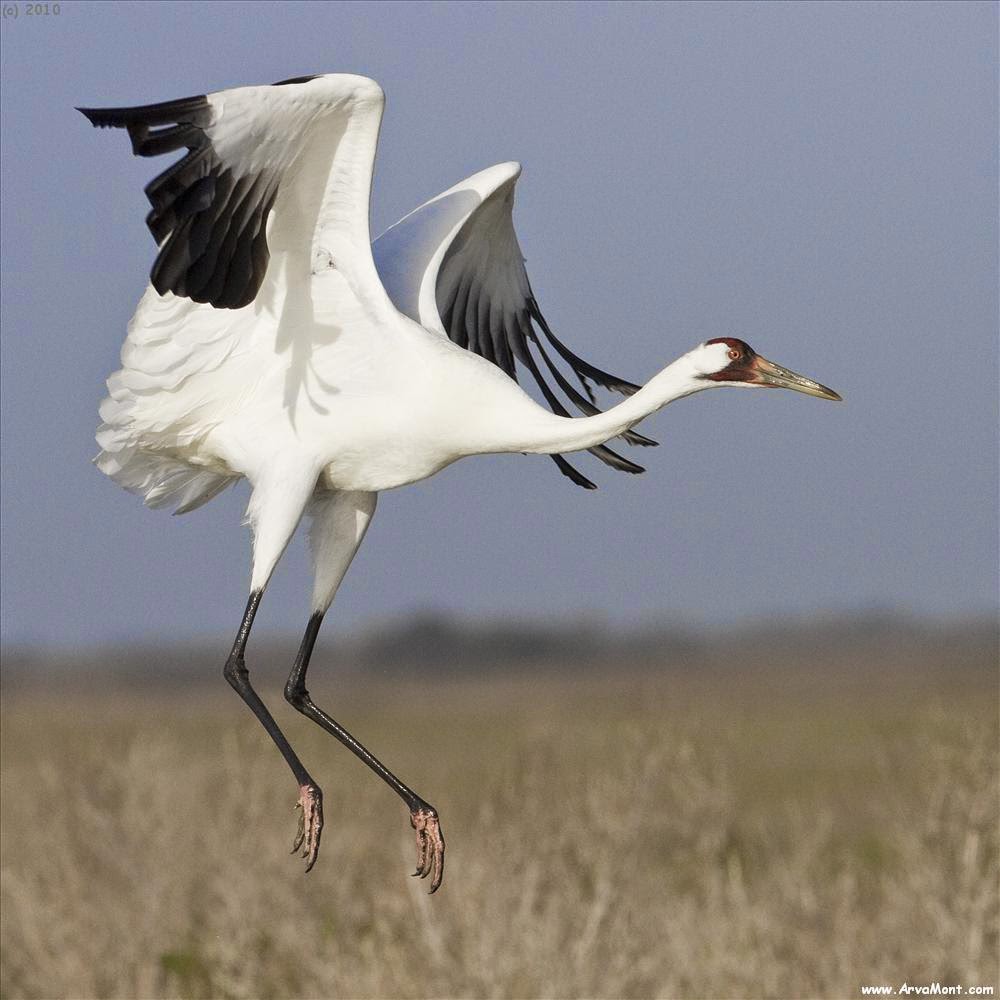 As a "wife," prior to actually having the role legally, Kumiko was wonderful! She brought out the best in George in so many ways. If not for her, I doubt George would have ever accessed his inner creativity and begun the cutouts, and she and Mehmet together created such a financial windfall for him, I gathered it was enough money to keep him for many years, possibly the rest of his life. George became somewhat more assertive and definitely had more self-confidence as a result. She was a positive force in his life, and that is always a good thing, however, she also initiated an obsessive/possessive compulsion within George: he couldn't stop wondering where she lived, where she had been born and raised, where her family lived, etc. I loved the way this depicted that idea of just accepting a person for who they are and enjoying your time together, or satisfying that basic human curiosity to delve into a person's background and privacy. It is an interesting conundrum to consider. I know of several people who have been totally surprised after years in a close intimate relationship to learn of total wickedness of their partner, but would it have been possible to reveal those earlier in the relationship without seeming to be overly obsessive? I don't know...

This book raised many pertinent issues about relationships and overall I liked it, but I didn't love it... Have you read this book? Is it on your TBR list? Or do you have any comments/reactions to my review? Always interested to hear others' thoughts. Feel free to share... I can't wait to see what the others thought of this one... :)

Join us for the next Literary Wives reviews on Monday, August 4.

We will discuss The World's Wife by Carol Ann Duffy.

I can't remember the last time I read much poetry, so this will definitely be an adventure for me!