Is it just reading with your Mother?

The End of Your Life Book Club
by Will Schwalbe 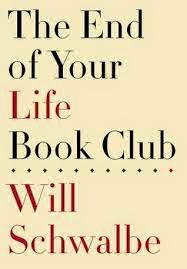 This book had so much to say...about reading...about books...about sharing reactions...about love...about pride...about parent/child relationships, especially in adulthood. 'Cause Will and his mother, Mary Ann, definitely (in my opinion, at least) had a remarkable friendship and camaraderie which seemed to culminate in their shared reading experiences. Personally, it is difficult for me to imagine such a give-and-take relationship with my own mother...suffice it to say, she was nothing like Mary Ann. To me, Mary Ann was the quintessential mom, depicting my idealized version! Will did an amazing job of memorializing her in this book, while simultaneously demonstrating the purpose of literature!

Literature as defined by Merriam-Webster online: (1) written works (such as poems, plays, and novels) that are considered to be very good and to have lasting importance, (2) books, articles, etc., about a particular subject, (3) printed materials (such as booklets, leaflets, and brochures) that provide information about something. To me, "literature" can be virtually anything we read, but it is in the sharing of written materials that meaning and so much more is determined; each individual providing their own unique interpretation of and reactions to the written word. Mary Ann believed "books are the most powerful tool in the human arsenal" and that reading all kinds of books "is how you take part in the human conversation." (p. 326). Our book club demonstrates that! As she stated:
The appeal of reading...lay in its indifference: there was something undeferring about
literature. Books did not care who was reading them or whether one read them or not.
All readers were equal, herself included.
Refugees would always request books, especially for their children, "sometimes even before medicine or shelter" (p. 110)


This picture of mother and children speaks volumes! You can definitely "see" Mary Ann's delight in her children reflected in her own expression. And...just look at that smirky little grin on Will's face! I believe the attitude behind that grin was accurately reflected in Will's daily life. His mom instituted a mandatory Sunday School attendance policy about which Will was not overly thrilled. However, he eventually selected the Christian Science Sunday School, mainly because "the cookies were store-bought and of the highest quality" and Tang was served. "It was fun to both follow the rules--I was going to Sunday School--and cast my lot with the outlaws [Christian Science believers]." (p. 94)

Religion played a large part in their discussion of Gilead by Marilynne Robinson. Although I am do not believe in a deity, nor ascribe to an organized religion, I was fascinated with this book and the story, but not at all put off by John Ames' Christian foundation for his understanding of life. And typically, that would be a distraction for me. Mary Ann felt that this book should make Will "want to have faith," however, Will states he feels the same as John's friend's son who "describes himself not as an atheist," but rather that he is in a "state of categorical unbelief." This appears to frustrate Mary Ann and she changes the subject; one of the few times it seems she disagrees with one of her children and persists in trying to change him.

Mary Ann had what Will termed "a slightly socialistic streak" when it came to treats and possessions. If one of the 3 children tried to "hog" more than their fair share of a treat, she would redistribute the portions, making certain that same child received "the smallest portion by far." (p. 85) Likewise, when it came to their possessions, mandatory sharing was the policy. I totally agree with the treat reapportionment, but I believe it is healthy for each child to have at least a few items they can feel are theirs alone and they are not compelled to share with their siblings, unless they choose to do so. But perhaps that is simply the result of my being an only child.

I could appreciate Will's description of the one single most effective tool they could use as children to avoid household chores, etc.: "Like churches during the Middle Ages, books conferred instant sanctuary. Once you entered one, you couldn't be disturbed." (p. 68) Therefore, if you could prove you were actively engaged in reading, you were exempt from common chores. I would have never had to do anything as a child since I virtually always had my "nose in a book," as they say! In fact, my grandmother would become a bit angry with me for walking through the house while reading! She always feared I would fall! I could relate to Mary Ann's dismissal of hypocritical double standards: "Mom was always a little amazed at parents who thought their kids should be reading more but who never read themselves." (p. 68) She and her husband read during the week and would sometimes spend whole weekend days reading! Wow...that would have been my dreamworld as a child!

So many people noted Mary Ann's bravery and courage to travel internationally visiting refugee campus, monitoring elections, etc. However, she did not believe herself to have been courageous, as she had chosen these actions. In her opinion, people who qualified as courageous had to endure and overcome challenging situations into which they were placed by no choice of their own, and in fact would certainly never have chosen. 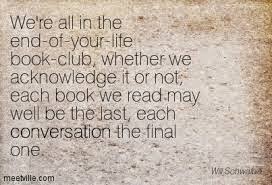 Each of our book club members greatly admired Mary Ann on so many levels, especially with regard to the unique relationship she developed with each of her children. She learned who they were, about their strengths and challenges, and then enabled and guided their development overall, all while working full-time outside the home and traveling much of the time. We loved the discussion of books and appreciated the fact that many of those listed were ones we've read and discussed in book club and/or on our own. This prompted listing and ordering of many different books!! In fact, just one or two people could use the book discussions contained within to have their own "book club"! :)

Have you read this yet? I would definitely recommend it. What are your thoughts?
Posted by Lynn @ Smoke & Mirrors at 2:42 PM