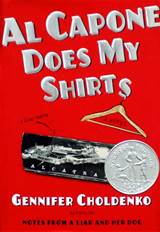 I was lucky enough to purchase all three of the books in Choldenko's Al Capone series at the library book sale! I have read and reviewed the first book, Al Capone Does My Shirts: A Novel, and loved it so much, I want to share my thoughts about and reactions to the other two installments in this trilogy as well. Besides, my grandson, to whom I will gift these books, is preparing to move with his family over 1,700 miles away soon and I want him to leave with these in hand!
Ms. Choldenko replied to my email message containing the link to my blog post, asking me if I would care to read and review an advance copy of her newest book, Chasing Secrets, due to be released August 4, 2015! And...offered to send me a copy! Now, let's consider: (1) I am an "avid" reader (Some might say 'obsessive,' but they would be wrong!), (2) I love to share my impressions to what I've read via blog posts, and (3) I value nothing as highly as getting to know the authors whose work I truly admire. Of course my immediate response was--I would be more than happy to read and review this book prior to its release!! And thank you!! :) (Happy dance time for sure!) This is one of the things I miss most about working at Borders, after all: free books and many of them ARCs received prior to release! But I promised myself that I would not begin reading that book until I had completed a blog post about these two... :) (I bargain with myself in this way quite often!)

The second book in this series finds Moose with more worries than before, wondering exactly what Mr. Capone might require as payment for making Natalie's admission to the Esther P. Marinoff School happen...for the second time! On the morning of the big occasion of Natalie's return to school,
Nat's mouth puckers to one side. "Moose school. Natalie home," she says.
"Not today," my mother says brightly. "Today is your big day. Today you're going to school."
"Not today," Nat tells her. "Not today. Not today."
I can't help smiling at this. Natalie likes to repeat what you say and here she's repeating my mom's exact words with a change of inflection that makes them say what Natalie wants them to say and not at all what my mother meant. I love when Natalie outsmarts Mom this way. Sometimes Nat is smarter than we are. Other times she doesn't understand the first thing about anything. That's the trouble with Natalie--you never know which way she'll go. (5)
Remember, Moose's older sister, Natalie, exhibits behaviors and symptoms of what would have probably been diagnosed as autism decades later. Daily life for Moose is quite different with Nat at school:
I can't remember the last time my mom made me breakfast.
I hate to admit it but it's nice having my mother to myself this way. We've been three people and an octopus all my life, and now the octopus is gone. It's not Natalie that's missing so much as the hubbub around her. The wild-goose chase of what to do and how to help her--one heartbreak chasing another.
What's left now is just my mother and me. How strange this is. How quiet. (55)
I do believe life can be just as different for "normal"/healthy siblings as for those displaying symptoms of autism, Asperger's, and the like.

At the table, she sits with me while I eat, as if she has nothing better to do. "You're a good son, Moose," she says as I help myself to another pancake. "A good brother too. Don't think I haven't noticed."
...This is not how my mother usually behaves. She doesn't notice me except in relation to Natalie.
"I wonder if you'll forgive me," she says in a voice barely audible.
"For what?" I manage to say.
Again her eyes search my face. "For being so wrapped up with Natalie," she whispers.
I stuff my mouth full of more pancake to push the unexpected feelings down. (56)
Awwww...having a 'special' child puts added strain and tension on the family members, though I believe that overall, the siblings benefit from learning hands-on about respect and willingness to accept and help others.

There is more interplay among the Alcatraz kids and Scout, especially with regard to adolescent hormones and who likes who. :) And the way Moose delivers roses is hysterical! As they say, whatever could go wrong, did! Although we gain additional insight into Trixle's personal life, it only solidifies our feeling that he is mean, with no compassion toward others. :(

Annie and Moose are 'having it out' regarding Capone's expectation of payback when Moose finally whispers,
"So are we going to play ball."
Annie rolls her eyes. "Jeepers, Moose. Something like this happens and all you can think about is baseball?"
"Yeah,...It is."
This passage rang so true of an adolescent male! I had to laugh!

Call it paranoia, but Moose wonders if the scratchy shirt that gave him hives, the constant plumbing problems in his apartment, and some of the comments made to him directly by Buddy Boy and Willy One Arm (who keeps Molly in his shirt pocket except when she's balanced on top of his head), aren't all part of a master plan... And then the kids all work together, each contributing to prevent a disaster...
Life is complicated. You'd think on a prison island--what with the bars and rules and everything--it would all be so clear...but it's not. (256)
Have you ever done something wrong for the right reason?

Al Capone Does My Homework by Gennifer Choldenko
It's tougher than you might think...

No one believes I live on Alcatraz. Even my eighth-grade history teacher made me write on the chalkboard I do not live on Alcatraz two hundred times.
My mother couldn't buy stockings... They wouldn't take her check, on account of it said: Helen Flanagan, Alcatraz Island, California. My father had trouble getting his driver's license. They thought he was an escaped prisoner too stupid to fake his address, instead of an officer at the most notorious prison in North America. (1)

This is the first day that Moose's father assumes his new job as Associate Warden at the famous Alcatraz prison. Moose is worried, believing his "dad is too nice to be a warden." Especially once he learns about the 'points system' maintained by the cons...killing a warden earns the most points possible, even just injuring one is worth a lot!

Fire breaks out in the apartment where Moose and his family live and the Trixle's are determined to blame it all on Natalie, to get her and her family off the island. Moose muses,
Out the window, a sailboat rips across the bay with a big tan guy holding the tiller. The lives of people like that seem so easy. My life is never like that. (40)
Isn't it the truth? Don't we all feel like that on occasion? As if others live such an idyllic life...while ours is anything but?!? Though if we knew that person well enough, we would be aware of the challenges he must surmount in his own life...no one has a 'perfect' life though it may appear to be so from a distance.

It is after the fire, Moose is back in his family's apartment looking for items that can be salvaged, when he discovers the blue homework notebook that he thought was lost. With relief, he realizes he won't have to rewrite his school essay after all.
That's strange. How could I have missed it before?...I won't have to do the paper again! Doing your homework twice is like puking, the having to eat your own vomit. (83)
Ugh! Now that's a vision I didn't want to have! :) Though it does sound like a young male teenager's thought! Upon inspection, Moose discovers notes left on his essay:
On the top of the first page of my thesis about Roosevelt and his polio, it says State problem in handwriting that is hauntingly familiar.
Al Capone has sent me notes before. I know his handwriting really well.
But how did he get his hands on my homework? It must have been the cons working on our place. Somebody took my homework and gave it to him.
Except why'd he write that? He doesn't like my thesis? He's my English teacher now?
And then on the bottom of the last page he wrote:
Roosevelt is a good fella, but Capone is the guy you should be writing about. Okay, Roosevelt had that polio problem, but he was born rich. Capone started with nothing. He earned every penny himself.
Capone messed up my homework. How strange is that? A gangster did my homework. Not just any gangster either--public enemy number one.
Luckily, he wrote in pencil. (83-84)
Ah, Moose later learns Capone had given him a huge clue, though in a way so subtle that none of the other cons would suspect, and unfortunately, Moose doesn't pick it up as quickly as he wishes he had...though he manages to intervene at the last minute.

There is more than one mystery contained within this third installment, and Piper must finally confess and suffer the consequences of her actions. This is the most complex of the three books. It is heartening to see how all the kids work together. All in all, another well-written story by Choldenko. I don't know if she has plans to write any more books in this series, but I hope so... Even if you don't feel compelled to read these yourself, they would, in my opinion, make an excellent gift for a young reader!
Posted by Lynn @ Smoke & Mirrors at 6:58 AM