Anne of Ingleside by L.M. Montgomery 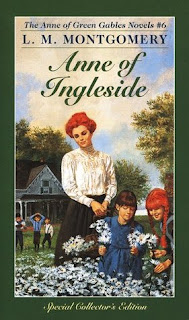 Ah, Anne must accustom herself to a new home, Ingleside:
I once thought I would never love it. I hated it when we went there first...hated it for its very virtues. They were an insult to my dear House of Dreams....I reveled in a luxury of homesickness for a while. Then...I found little rootlets of affection for Ingleside beginning to sprout out. I fought against it...I really did...but at last I had to give in and admit I loved it. And I've loved it better every year since. (10)
Anne did finally adjust, especially once she had gardens established and more than enough children to fill the house!
I love the way Susan always addresses Anne as "Mrs. Dr. Dear"! It is so very sweet and yet respectful...

In this sixth installment we learn much more about Anne and Gilbert's offspring, especially some of their various (and rather common) trials and tribulations! There is the time that Jem was missing and the whole town was out looking for him--he was found safe and sound right in the house! It seems that several of Anne's children have inherited her own creative imagination. Her Walter reminds me so much of Paul Irving from Anne's first teaching position and Anne herself...
Walter was lying awake in his bed trying to escape from the haunting thought that he was to go away next day by giving free rein to fancy. Walter had a very vivid imagination. It was to him a great white charger,...on which he could gallop backward or forward in time and space....The black plaster-of-Paris cat on the library mantelpiece was a fairy witch. It came alive at night and prowled about the house, grown to enormous size. Walter ducked his head under the bedclothes and shivered. He was always scaring himself with his own fancies. (36)
Ah, shades of his mama and the way she and Diana became so scared they wouldn't walk certain paths at night! :)

Enter the main 'tribulation' of the moment for Anne and her children, particularly Susan, and much less for Gilbert as he (comparatively) spends so very little time at home--Gilbert's own "Aunt Mary Maria" (actually his father's cousin)! She reminded me so much of my mother it was scary! As Anne became a bit perturbed by said "Aunt,"
"I think I'll go upstairs and lie down"... She kissed Walter good-bye rather casually and hurriedly...very much as if she were not thinking about him at all. Walter would not cry. Aunt Mary Maria kissed him on the forehead...Walter hated to be moistly kissed on the forehead...and said:
"Mind your table manners at Lowbridge, Walter. Mind you ain't greedy. If you are, a Big Black Man will come along with a big black bag to pop naughty children into."
It was perhaps as well that Gilbert had gone out...and did not hear this. He and Anne had always made a point of never frightening their children with such ideas or allowing anyone else to do it. (38)
This resonated so strongly with me. I also tried to never use fear as a motivator for my own children in any way. In my opinion, that should be reserved for the truly dangerous lessons--you could get hit by a car if you run into the road, you will get burned if you touch a hot stove, etc.--for it loses it's efficacy if overused and teaches children to manipulate emotions to influence people, rather than encouraging the development and use of intellectual logic and rationale to understand, reason, and learn.

Walter's experience at Lowbridge is short-lived as he is so traumatized that he actually runs away the first night and walks SIX MILES to return home, convinced that his mother is dead. Upon entering the house at the first light of dawn and being comforted by Susan and assured Mother has not died, he tells Susan,
I suffered awful agony of the mind"... (52)
OMGoodness! Is that not cute? So dramatic, and yet so very sincere! Anne reassures him,
"Oh, Mummy, you're not going to die...and you still love me, don't you?"
"Darling, I've no notion of dying...and I love you so much it hurts. To think that you walked all the way from Lowbridge in the night!"
"And on an empty stomach," shuddered Susan. "The wonder is he is alive to tell it. The days of miracles are not yet over and that you may tie to."
"A spunky little lad," laughed Dad... (52)
I love Susan's "and that you may tie to" phrase! Upon obtaining a promise from his parents that he needn't ever leave home again unless he wanted to do so, he hesitates saying that he will never want to leave again, realizing that he wouldn't mind seeing Alice again! Ah...the attraction to girls had just begun. :)

Susan tells Rebecca Dew that
...Nan and Di have named their old china doll with the split head after Aunt Mary Maria and whenever she scolds them they go out and drown her...the doll I mean...in the rainwater hogshead. Many's the jolly drowning we have had, I can assure you. (60)
I had to laugh! Although Susan's well aware Anne and Gilbert would put a stop to this practice, she keeps this secret ritual from them. Unfortunately, this "Aunt" extends her initially announced two-week stay into many months, which was not uncommon at that time. Relatives might 'visit' for years..or even decades! Anne and Susan are both frustrated and upset with this visitor's behavior, but Anne keeps trying to rationalize and be kind to her...ultimately, it is her over-the-top kind act that ironically upsets Aunt Mary Maria enough to return to her own home and leave them in peace yet once again! Again, I laughed out loud!! Montgomery's humor is so well-timed! As Anne rather guiltily realizes, "I've never sped a parting guest so willingly." (80)

In the process of trying to make a match between two people who were already secretly engaged, Anne
...ruined her dining room carpet, destroyed two treasured heirlooms and spoiled her library ceiling....[T]here is one consolation...Jen Pringle's letter today saying she is going to marry Louis Stedman whom she met at my party.The Bristol candlesticks were not sacrificed entirely in vain. (100)
Jem worked and saved his money to purchase what he thought were real pearls for his mother's birthday party, then discovered they were not real--he was devestated.
"Oh, Mother dearwums, those pearls aren't real pearls...I thought they were...I did think they were...did..."
Jem's eyes were full of tears. He couldn't go on.
If Anne wanted to smile there was no sign of it on her face. Shirley had bumped his head that day, Nan had sprained her ankle, Di had lost her voice with a cold. Anne had kissed and bandaged and soothed; but this was different... this needed all the secret wisdom of mothers.
"Jem, I never thought you supposed they were real pearls. I knew they weren't...at least in one sense of real. In another, they are the most real things I've ever had given to me. Because there was love and work and self-sacrifice in them...and that makes them more precious to me than all the gems that divers have fished up from the sea for queens to wear. Darling, I wouldn't exchange my pretty beads for the necklace I read of last night which some millionaire gave his bride and which cost half a million. So that shows you what your gift is worth to me, dearest of dear little sons." (113)

Jem is seemingly unlucky with befriending and loving dogs, Diana and Nan are both easily conned by other girls who feed them lies, Rilla tosses a whole cake into the stream rather than delivering it to the church as promised because she thought it would be awful to be seen carrying a cake! As Anne muses about her girls,
They were still hers...wholly hers, to mother and love and protect. They still came to her with every love and grief of their little hearts. For a few years longer they would be hers...and then? Anne shivered. Motherhood was very sweet...but very terrible.
"I wonder what life holds for them," she whispered.
"At least, let's hope and trust they'll each get as good a husband as their mother got," said Gilbert teasingly. (194)
Anne considers:
Well, that was life. Gladness and pain...hope and fear...and change. Always change! You could not help it. You had to let the old go and take the new into your heart...learn to love it...and then let it go in turn. (212)
Her final prayer:
...Dear God,...help all mothers everywhere. We need so much help, with the little sensitive, loving hearts and minds that look to us for guidance and love and understanding. (33)
Of course, this should include fathers and all caregivers to children, not just mothers. :)

I am always left with such an appreciation for Anne's kindness, generosity, and respect for all by the end of each of these books! It really is inspiring to me! How about you? Have you read any of these Green Gable books? If not, perhaps you will...
Posted by Lynn @ Smoke & Mirrors at 3:08 PM