A venture beyond Pooh Bear... 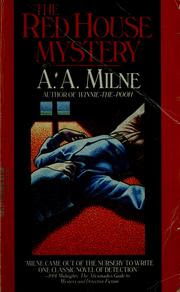 I will admit that until I discovered this book at a library sale, I was unaware Milne had ever written anything other than the Pooh Bear books. Since I love mysteries and I was very curious to see what kind of mystery the creator of Winne-the-Pooh might write, I brought it home! I was very pleasantly surprised! To me, this book was comparable to a mystery written by Agatha Christie, the first mysteries I ever read beginning at age 12, or Ngaio Marsh, another mystery writer I discovered several years ago through a library book sale! I have now read this as a Classic and also a book for R.I.P. X.

As one might expect, Mr. Albrecht's murder occurred in a Red House! Robert, Mark Albrecht's estranged brother, no more than arrives for a visit with his brother than a gunshot is heard and he is found dead! The reader learns that Robert had been living in Australia for the past 15 years. Rumor has it he was the 'bad seed' or 'black sheep' of the Albrecht family and left under questionable circumstances. Meanwhile, most of Mark's adult life has been made quite easy financially due to his patron's death. This man bequeathed his entire fortune to Mark and died As Mark entered only his third year working as a "writer." Though no one seemed to know what he had ever "written" other than letters and other such personal compositions.
Call him a snob if you like, but not the worst kind of snob; a hanger-on, but to the skirts of Art, not Society... (19)
We learn that Mark was not only a patron and supporter of the arts, but also self-published a slim volume every now and then (all at his own expense), and he even
took a theatrical company on tour, playing host and "lead" with equal lavishness. (19)

Mark's generosity also extended to Matthew Cayley, the cousin he took in at age 13, having realized the boy's circumstances were just as limited as his had been. He educated and provided for Matthew until he reached age 23, at which time the boy "looked after" his cousin's affairs for him.
By this time Mark had bought the Red House and the considerable amount of land that went with it. [Matthew] Cayley superintended the necessary staff. His duties, indeed, were many. He was not quite secretary, not quite land-agent, not quite business-adviser, not quite companion, but something of all four. Mark leant upon him and called him "Cay," objecting quite rightly in the circumstances to the name of Matthew. Cay, he felt, was, above all, dependable; a big, heavy-jawed, solid fellow, who didn't bother you with unnecessary talk--a boon to a man who liked to do most of the talking himself. (20)
Ha! I appreciate the sarcastic humor Milne inserts.

We are then introduced to each of Mark's guests: Major Rumbold, Bill Beverly, Ruth Norris, and Betty Calladine. As typical, we also learn something about the servants: Mrs. Stevens, Audrey, and Elsie. Enter Antony Gillingham, a friend of Bill Beverly's who had been invited to visit him at the Red House while Bill was a guest there. Antony is self-sufficient financially and occasionally works in different jobs as the mood strikes him. It is Antony and Bill who actually investigate the murder, in tandem with the local police. Antony decides to become a "private sleuthhound" and assumes the position of 'Holmes,' to Bill's 'Watson.' Through the course of the investigation, we learn the details of the topography of the land directly surrounding the house as well as the floor plan of the house itself--all of which helps the reader follow pertinent and/or misleading discoveries as they are made. This is much as one would expect when reading Christie or Marsh. Milne does an excellent job of depicting the bits and pieces of memories and observations that aide Antony and Bill in their progress to identify the murderer. Inspector Birch follows all leads and even drags the 'lake' (perhaps over-sized pond might be a more accurate term), and interviews everyone with any connection to the Red House and/or Robert Ablett.

There are secret passages, ghostly appearances, suspicious shadows in the hallways/rooms, new underwear (?!?), mysterious boat trips in the middle of the night, as well as night-time underwater searches performed by 'Watson' (Bill) per 'Holmes' (Antony's) insistence! In addition, there are love triangles, revenge, and resentment to be considered and factored into the final equation that will solve this murder. In the end of it all, Antony is quite gracious and even a bit understanding of the murderer's motivation.

This was such a quick read and really enjoyable with tinges of humor here and there and a solid murder mystery with many twists and surprises along the way. I would recommend it. Have you read this or any other of Milne's works outside of Pooh Bear?
Posted by Lynn @ Smoke & Mirrors at 5:56 AM