A Lady and Her Husband
by Amber Reeves
One of the first things that struck me as I began reading this novel
was to note that the original publication date was 1914!
And seemingly still so pertinent today in certain ways...

If you wish to read this book,
I would strongly suggest you access it (for free) through Google Books.
Though this was easy and convenient, after seeing others' comments regarding
the Persephone reprint, that would probably be a better choice!
I gather the introduction alone makes this version worthwhile!
Though I am no fan of reading books in eformat, I did it for this one. (Yuck!)

I know, I know, you all thought I was also on break this month!
I've been "on break" for quite a few months now.
I am blaming the fact that I had both knee joints replaced this summer.
Though I've not quit reading, I am just now getting back into blogging reviews...
at least for the Literary Wives! :)

I did enjoy reading this. It is, in my opinion, truly classical writing. Plenty of description along with characters' thoughts and actions... Remember, it was published in 1914, so their is some language based upon a character's preconceived ideas that we would now consider unacceptable. Mary, Mrs. Heyham, has just been informed by her younger daughter, Rosemary, that she plans to be married--soon! This news greatly upsets Mary, who has never done anything beyond managing the servants and household, and overseeing her three children's upbringing. We learn that the older daughter is already married and expecting a child, and Mary's only son, Trent, works with his father, James, running the family business consisting of a chain of "teashops."

Mary's husband, James, is extremely worried about his wife in the wake of losing her remaining daughter from the household. I admit to cringing when I read James calling his wife "little mother." Oohh! Ugh! That term just implied so much...that Mary was "little," as in she did "little," had "little" else in her life beyond her children about which she cared or could manage... So Mary is experiencing what we might now call "empty nest syndrome," when the children have all moved out of the house and are independent self-supporting adults. Though in 1914 children still would expect financial support from their family, if the family had money, which this family did. (I should be so lucky. :)) So, I believe I have revealed in the past that I did not experience such "emptiness" when my children were out on their own. Perhaps because I had been mentally preparing myself from the time of their birth: my job as a parent is to do my best to make then self-sufficient independent adults, NOT to try to hang on to them forever...as my own mother tried to do with me. (Yes, she did drive me crazy with her obsessive behavior...) I love my children, their partners, and my grandchildren, but I do my best not to make a nuisance of myself in their lives.

I had to chuckle as there was discussion about Rosemary's "socialistic" beliefs and opinions. See? Still pertinent today, huh. Oh, my. I just sigh... Rosemary suggests that her mother involve herself in the family business by investigating the working conditions and wages of the "girls" hired to work in the family-owned teashops. These "girls" were screened to determine that they were from relatively financially secure homes and still living with their families. After all, they wouldn't want any "rough" females who may be truly self-supporting! I had to laugh at this. To think that only about 100 years ago these attitudes were still ever-present in U.S. society. Any woman who was trying to support herself was evidently a 'hussy', a woman of ill repute! Thank goodness times have changed!

Women were still very much dependent upon their husbands, with little to no self-agency in general society. They were simply known as Mrs. Heyham, or Mrs. whatever her husband's last name happened to be. And so it was when James married Mary that he ended up taking over her family's business and successfully expanding it. However, Mary still retained legal ownership of half the business, which proves to be quite pertinent in the end. Mary learns first hand of the living situation of one of the teashop girls and is appalled by the depressing and cramped living conditions as well as the extreme poverty. Additionally, she learns of the very limited breaks allowed the girls during their work shifts and of the physical discomfort of their working environments and conditions. However, rather predictably, once Mary addresses these issues with James, she is rebuked as having no experience or knowledge to realize her requests are simply impossible to seriously consider.

Mary accepts his refusal, until she learns of his plans to take the business "public" and expand into a new business realm of movie production and theaters. At the same time, James confesses to Mary that he had cheated on her with a red-headed woman in the past, stating that he has never lost his love or respect for Mary, and that it was simply a "mistake." (Isn't that always the case?) Mary is so appalled that she moves out and is gone for 10 days, after writing to James that she refuses to approve his new business venture and make a public offering of the family teashop business.

In true "typical male" form, her son, Trent, was only worried that he would lose the adoration of his own mother, or that he would no longer have a "charming woman" as his mother, by whom to be received. Upon reading this my thought was, "What a spoiled brat!" Though at one point Mary states that it was her duty to "adore" Trent since he was her son. Additionally, she comes to the realization during her time alone that she has simply pandered to James during their whole marriage and never truly interacted with him as anything even close to an equal or even as another rational human being. She does her research and reads library books regarding business and economics to better educate herself about James's proposed new business and the "teashop" business. She does come to a decision regarding her forgiveness of James for his affair--that he has treated her kindly and generously during their whole married life, it did not affect his behaviors toward her in any way.

Once Mary returns home, determined to take a more active role in the business and assert herself as an advocate for the employees, she is struck by a new realization: it was tough for women to realize that they were no longer "protected" by a man/their husband from the outside world. I had never fully considered that perspective before, but I'm sure it was true for many females who became 'enlightened' and more involved in everyday life. For Mary, it was a specific grief:

What she hoped...was impossible.
She had hoped for her old blind worship back again in answer to James's love.
She could not have it back, it was gone, and she was afraid.
She had covered herself from the world with James's strength,
with his assurance and his love for her.
His kindness had been her shelter from suffering, from truth, from life.
Now these gifts of his protected her no longer; she stood alone. (378-379)

Mary was, finally, an independent agent within society. And while it might be scary for her now, I venture to say that it was enlightening and uplifting for the remainder of her life.

Oh, and how did James handle this news of her determination not to endorse his new business? He decides to use this newfound advocacy of employee rights as a bully pulpit to stand for political office. He has, of course, convinced himself that this will be just the thing for his future... 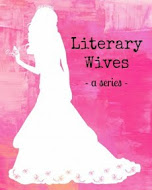 And now for the Literary Wives question:
What does this book say about wives
or about the experience of being a wife?

Wives are considered their husband's possessions for the most part. At least that is definitely how James views "little mother"/Mary. He is shocked, appalled, and extremely angry upon learning she has simply moved out and left him with no forwarding address, except through the bank. In effect, he thinks, "How dare she?" Well, she did certainly dare...and to her credit, it seems once she returns as if she is determined to be more of her own person, especially with regard to her marriage and with her husband.

Perhaps the role of wife is best typified by Rosemary's fear of marriage. As she states, she always felt her older sister, Laura, believed much as she did,
I've always thought that however much I loved anyone I should love them proudly,
as a free person, as an equal.
However, she notes that Laura is now just a simpering fool to her husband, and Rosemary fears she will become the same type of "wife." Reeves discusses the differences between raising daughters and sons several times throughout the book. As Laura is discussing Russian authors with her mother, she admits her husband has no interest in such writing,
But then I suppose we're trained to sympathise with their experiences,
and they're not trained to be interested in ours. (174)
Mary realizes that girls are typically not raised to do any more than learn to "chatter at tea parties," rather than to identify and/or follow their interests. Females are only there to serve their male spouses...period! They are trained to be 'simpering fools' in hopes they will attract a rich husband.

What I truly appreciated about this book was Mary's further development as an independent adult. Though in the end she realizes she has thrown off the protective cloak of her husband's social status and reputation, and must now deal with the real world directly...and as she has recently learned, it is not pretty... I was gratified by Mary's evolution and hopeful that she would find the rest of her life to be fulfilling in a way she had not before.

Interestingly, Amber Reeves was HG Wells's mistress!
Here is an article in the Guardian discussing Reeves.

There is a book published about Amber and her mother in 1992:
Maud and Amber by Ruth Fry
It's relatively short and looks to also be available on Google Books.

What's next for Literary Wives?


The Blazing World by Siri Hustvedt

Email ThisBlogThis!Share to TwitterShare to FacebookShare to Pinterest
Labels: #LiteraryWives, A Lady and Her Husband, Amber Reeves, fiction, literary wives