The Return Journey by Maeve Binchy

The Return Journey by Maeve Binchy 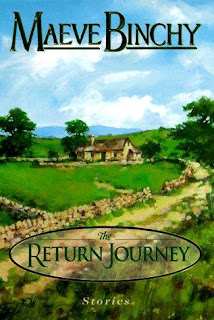 This book is one that has been in my house for years.

It perfectly satisfied a prompt
for an April 2020 reading challenge,
so I finally picked it up
and read it!

Maeve Binchy is one of my absolute favorite authors.
Although she died in 2012,
I will be collecting and reading all books
authored by her that I have not yet read...

I mainly read for characterization,
and in that respect,
she is one of the masters!

This is an absolutely delightful collection of short stories.

In "The Return Journey" Gina travels to her mother's home country, where her mother has never visited after emigrated to the United States from Ireland. During that visit, Gina meets a man and decides to settle down in her mother's childhood hometown. History repeating itself...?

Ms. Grant and Mr. Green each manage to somehow pick up "The Wrong Suitcase" at the airport, each not realizing their error until opening the case in their possession. As they meet to exchange cases, they shake hands and simultaneously claim not to have read the other's papers...in unison...each then realizing the other was lying. :) Human nature! We are curious about each other, aren't we?

"Miss Vogel's Vacation" is a lovely story about a woman who takes life as it comes...disappointments and all, retaining a positive attitude. In the end, she realizes she has had it much better than some whom she felt had cheated her out of a 'better' life. Good for Miss Vogel!

Shane and Moya in "Package Tour" believe themselves to be soul-mates... Until they plan to travel together and each of them is preparing to pack. Then differences arise that are seemingly insurmountable. They both wonder why this disparity couldn't have been discovered before they fell in love? Personally, I felt that if they did indeed love each other, they could have managed...but that's just me! :)

In "The Apprenticeship," both Florrie and Camilla manage to raise themselves to a much higher social status than that to which they were born. As Camilla is marrying an elite male, Florrie realizes that in their training to 'marry up' on the social ladder they have overlooked the concept of love in a relationship. She vows to incorporate this into her life as she searches for an acceptable spouse. Quite naturally, my thought is, "Uh-oh. That may prove to be the downfall of your training!" :)

Lena gets a lesson on "love" in "The Business Trip." She has managed to convince herself that she is "in love" with her boss. However, her aunt Maggie, feels otherwise and encourages her to use the opportunity of this time spent alone with Shay to learn more about him so she can determine (1) how well she truly knows him, and (2) whether he really is the person she believes him to be. Lena feels a sense of relief as she determines Shay is incompatible with her attitudes and behaviors...and anxiously anticipates arriving home to begin life anew after four years of devotion to a person she only thought she knew... Awwwww...

"The Crossing" depicts an all-too-familiar occurrence of connecting intensely with a total stranger and then parting ways without ever exchange contact information or expecting to see the other person again. This is so true, isn't it? We often glean information and/or insights from strangers that prove to be very beneficial, yet, the other person never knows of their impact because we never communicate with them again after that initial meeting. Life can be very strange sometimes. :)

Paul the Purser gets a very good lesson in "implicit bias" when he becomes rather obsessed with a trio of passengers which includes the one male, Charlie, and "The Women in Hats," Bonnie and Charlotte. The woman he has already befriended on this voyage, Helen, informs him in no uncertain terms that while he believes others should willingly accept the fact that he is gay and is devoted to a male partner, he is unable to drop his own prejudice against overweight people, especially a "fat" female. This was very interesting. Helen tells him in no uncertain terms of his despicable behavior that has deeply offended her. But she refuses to divulge her connection to the issue. I just love Maeve Binchy's ability to write such simple yet powerful stories within only 18 pages.

In all their "Excitement," Rose and Ted plans what appears to be a concrete immovable plan to have an overnight tryst, away from both of their respective spouses and families. However, both discover relatives at the same hotel where they have a reservation and end up with no more "excitement" than returning to their families without the extramarital sex they had planned to obtain. This was quite humorous!

In "Holiday Weather" Frankie and Robert are planning their usual annual vacation together when plans are interrupted at the last minute--the destination is changed and Robert must work the whole week. This gives Frankie time to get to know Shane, the innkeeper better. She decides to stay in Ireland before the week ends... Robert is married. Interestingly, once chaos inserts itself into their plans, and neither of them is any longer in 'control' of their situation, previously unrevealed incompatible aspects of their personalities emerge...and the relationship ends. I suppose it is easy to maintain an extramarital affair when everything remains under your control, but if not, perhaps alter egoes show themselves...

Victor in "Victor and St. Valentine" is perhaps one of the last truly romantic males. He was raised in a household where Valentine's Day was intensely celebrated, but has learned as an adult, that the females he has known overall do not appreciate honest "Valentine" sentiments. Until as an electrician, he gets to know Mrs. Todd, one of his clients, very well and ends up offering to escort her to Australia to visit her granddaughter, Amy. It is Amy who gives Victor his first adult Valentine's gift and card, and I believe Victor may well end up in Australia permanently! :)

In "Cross Lines" Martin and Kay demonstrate just how incorrect our first impressions can be until we actually speak with and get to know a person. They make assumptions about each other simply from visual input, then they actually have a conversation. Again, strangers meet and impart information/opinions, and then assume they will have no further contact. However, as each of them rides in separate taxis to their hotel, they are unknowingly headed to the same place and will most likely encounter each ot her again, very soon!

In "A Holiday with Your Father" Rose fantasizes about the relationship between a younger female and older wheelchair-bound male she observes in the airport. She is immediately jealous as she assumes he woman is his daughter and they are traveling together by choice. She wants her father to travel with her. But when she broaches the subject with her own father yet again, he insists he still cannot do so, but perhaps once he is retired... And she finally agrees they could discuss it then. Rather poignant. And I was jealous! Having never had my biological father in my life, nor living with a stepfather, etc., I believe I have always fantasized a close father-daughter relationship and all that might entail. Though who knows? Perhaps I would have despised him in the end...but I will never know as he has been dead 20+ years.


Even if short stories aren't necessarily your thing, I can highly recommend this collection.
They certainly worked well for me!