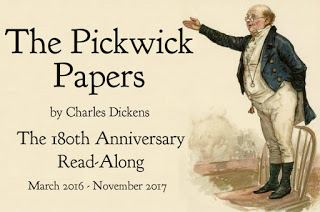 As is true for many bloggers, my resolution to restrict the number of reading events
in which I would partake during 2016 has literally been abandoned.
I just get so excited by participating in these events!
They definitely encourage me to read outside my wheelhouse!

This event is hosted by Behold the Stars.
I love the premise of this Read-Along's organization!
March 2016 is the 180th anniversary of the publication of the first installment of
The Pickwick Papers (also known as The Posthumous Papers of the Pickwick Club).
So 180 years later anyone who desires to do so,
can read this in exactly the same way others read it so long ago!
You can read the details and register here.
(I have included some of those same details in the following paragraphs.)
But first...
I feel it necessary to offer at least a bit of explanation for my NEVER having read
a novel by Charles Dickens!
I know...I am very appropriately hiding my face in shame.
However, there are several different reasons for this lack of attention
to a major classical author and his works.

Firstly, I am rather intimidated by Dickens. Why? Uncertain. Perhaps lack of direct experience with his writing more than anything?

Secondly, he was virtually the only classical author my mother (who didn't read much) would ever read. Follow-up note to that last sentence: It's not as if my mother and I truly agreed on much or really "got along," per se. She was an extremely rigid person in all respects and you either agreed with her and therefore you were "right," or you disagreed with her and therefore you were "wrong" and negligible as a human being. This was not a philosophical foundation that leant itself to forming interpersonal relationships at all, let alone "good"/respectful/cooperative or accepting interpersonal relationships. And it certainly led me to never trust her recommendations as anything even close to objective!

Due to all this, I have always fought an aversion to Dickens rather than ever being attracted to his writing. But, I believe this read-along offers just the opportunuty I need to finally read at least one of this man's publications! I am excited by this possibility!

Interestingly, this particular publication was published in installments, as was much more common in the past than it is now. Therefore, by reading each installment, consisting of two-three chapters per month, we will actually be reading the book as it was presented in its original format. I assume this will be a good strategy to introduce myself to this man's writing since it will allow me to read it very gradually rather than all at once which I fear may be a bit much for me. Also, it will allow me to discuss what is read each month with others and thereby, perhaps better understand it, just in case I feel "lost." And most importantly, it will encourage and enable me to finally read one of Dickens' works!

Supposedly, readers have historically fallen into one of two camps about this publication--either they felt it was a "comic masterpiece" or they hated it believing it to be "laborious and overdone." Behold the Stars is hoping that reading it by following the original publication schedule will help her move from the camp of hating it the first time she read it. (Yikes! :)) By stretching it out per this schedule, the read-along will run from March 2016 through November 2017! I love the fact that there will be no scheduled reading for May 2017 to accurately reflect the fact that Dickens missed his deadline for publication in May 1837. It is reportedly the only time he missed a deadline and it was due to mourning the passing of his sister-in-law, Mary Hogarth. Awww...

Good luck to us all as we embark on this literary journey!

Have you read this one? Any advice to give?