Can "faith" accomplish the impossible? Pt 1

The Unlikely Pilgrimage of Harold Fry
by Rachel Joyce
Part 1: Committing to the Walk
There was so much to discuss and I wanted to use so many direct quotes, I have split this review into two parts. I love Joyce's writing style. (Part 2 is here.) 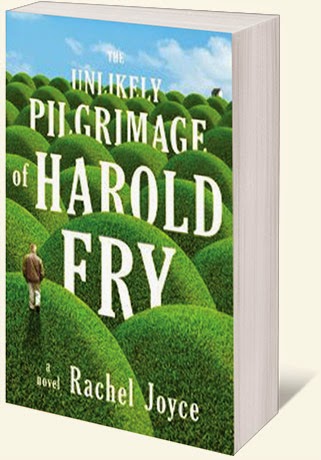 This cover picture should appear to be "bigger than life," as that is how I would term Harold's goal: to walk across England (600 or 700 miles, if I remember correctly) to visit a former coworker who is suffering from cancer and in hospice, thereby keeping her alive... He wants her to promise to "wait for him"; to stay alive until he arrives. Initially, he believes he can not only keep her alive, but he may be able to "cure" her through his pilgrimage of faith. It is obvious from the start of this book that Harold and Maureen's marriage is considerably less than happy. And as she did in the eshort-story A Faraway Smell of Lemon, Joyce slowly but surely reveals the historic details of this relationship, delineating the reasons for their discontent with each other. They were sleeping in separate beds, never speaking to one another except about the most mundane daily activities, most certainly never about their feelings, desires, regrets...nothing meaningful in an intimate long-term relationship.

I wonder if readers who have not experienced a failed or failing long-term relationship would resonate as well with this particular book. (Our book club's youngest member did not...) I certainly could and did, but I have similar situations in my own past which made it rather easy to connect with these two characters. Though initially I felt Maureen acted quite bitchy (I even noted "henpecked Harold" on page 4), I eventually realized that each of these characters had simply coped in the best way they knew how with their own life experiences. I will say I believe alcoholism is somewhat an inherited behavioral tendency, though that doesn't deny the fact that individuals can and do choose their own path, avoiding it entirely. I have witnessed two people from my past who wasted themselves away much as David did, though unlike him, they died of "natural causes" in the end. I cannot imagine discovering your child in the situation that Harold had...there are no words for me to adequately express what I believe that may feel like, not for either parent. I believe that to be the most grievous situation any parent could endure.

The day he was born his mother had looked at the bundle in her arms, and felt
appalled. She was young, with a peony-bud mouth and a husband who had seemed
a good idea before the war and a bad one after it. A Child was the last thing she
wanted or needed. The boy learned quickly that the best way to get along in life
was to keep a low profile; to appear absent even when present. (page 25)

This was the Borders Book Club read for January 2015, and we all agreed that Harold really had no way of developing interpersonal skills given his childhood: his mother literally packed a suitcase, left it by the door, and then walked out with it when he was a very young child, never to be seen or heard from again. Thereafter, his father had a succession of "aunts" living with them until Harold turned 16, when his father placed an overcoat on him, and sent him out the door. (I actually have known someone who was similarly left to his own devices at the age of 16 by his own parents. Sad...) I believe this accounted for his stoic personality and disconnectedness as an adult, especially with his own wife and son.

Mothering had come so naturally to Maureen. It was as if another woman had
been waiting inside her all along, ready to slip out. She knew how to swing her body
so that a baby slept; how to soften her voice; how to curl her hand to support his
head. She knew what temperature the water should be in his bath, and when he
needed to nap, and how to knit him blue wool socks. He had no idea she knew these
things and he had watched with awe, like a spectator from the shadows. It both
deepened his love for her and lifted her apart, so that just at the moment when he
thought their marriage would intensify, it seemed to lose its way, or at least set
them in different places. He peered at his baby son, with his solemn eyes, and felt
consumed with fear. What if he was hungry? What if he was unhappy? What if other
boys hit him when he went to school? There was so much to protect him from, He
wondered if other men found the new responsibility of parenting as terrifying, or
whether it had been a a fault that was only in himself. It was different these days.
You saw men pushing buggies and feeding babies with no worries at all.
"I hope I haven't upset you?" said the woman beside him.
"No, no." He stood and shook her hand.
"I'm glad you stopped," she said. "I'm glad you asked for water." He returned to
the road before she could see that he was crying. (page 51)

I can see how the "other partner" may feel "left out" when the more innately nurturing of the two parents perfectly cares for a child, and given Harold's own life experience, he immediately retreated from the situation and was only a peripheral part of their relationship through the years. And that didn't appear to improve over time--Harold shares the story of Queenie being the first female hired at the brewery with Maureen and David:

"Is that supposed to be interesting?" David had said. ...
Maureen smiled. Harold didn't expect her to stand up for him because she loved
her son, and that was right, of course. He only wished that sometimes he didn't feel
so outside, as if what bonded them was their disassociation from him. (page 54)

It appears that his frustration with life culminates in his continuing to walk further and further when he ostensibly left his home to simply post a reply to Queenie's letter from the nearest postbox. I felt very sorry for Harold when he called the hospice and left the following message for Queenie:

Tell her Harold Fry is on his way. All she has to do is wait. Because I am going to
save her, you see. I will keep walking and she must keep living. Will you say that?
I'm setting off right now. As long as I walk, she must live. Please tell her this
time I won't let her down.
Harold stared at the ribbon of road that lay ahead, and the glowering wall that
was Dartmoor, and then the yachting shoes that were his feet. He asked himself
what in heaven's name he'd just done. Overhead a seagull cracked its wings and
laughed. (page 19)

We learn that he had totally misinterpreted his brief conversation with the "Girl in the Garage," having not heard the ending. I did feel some pity for Harold at this point, yet somehow, I also admired his strength of belief and hope/faith in his own ability to make amends for all the years he had ignored Queenie, and in such a dramatic fashion.

He was already different from the man who had set foot from Kingsbridge, and
even from the small hotel. He was not someone off to the postbox. He was walking
to Queenie Hennessy. He was beginning again. (page 53)

Ah...and will this journey provide a new beginning...for whom? for him? for Queenie? for Maureen? for David? for everyone?

After the first night Harold briefly considered returning home and properly planning for this sojourn,

But planning his route would involve both serious consideration and waiting, and
there was no time for either of those things. Besides, Maureen would only give
voice to the truth he was doing his best to avoid. The days when he might expect
her help or her encouragement, or whatever it was he still wanted, were long since
gone.
If he went home now, if he even consulted a map, he knew he would never go
to Berwick. (page 26)

It's true, isn't it? Sometimes we just have to take a leap of faith and go for it, no matter how crazy it may seem to others...or even to ourselves, we just have to know...can we do it?

Queenie Hennessy. After all these years. The memory of something long buried
shivered deep inside her. (page 24)

And her thoughts later:

So when Harold said he was walking to Berwick, did he mean that once he got
there, he was staying?
Well, he could go if he wanted. She should have seen it coming. Like mother,
like son; although she had not met Joan, and Harold never spoke of her. What kind
of woman packs a suitcase and leaves, without even a note? Yes, Harold could go.
There were times when she herself had been tempted to call it a day. It was David
who kept her at home, not marital love. She could no longer recall the details of
how she had first met Harold, or what she had seen in him; only that he had
picked her up at some municipal dance, and that on meeting him, her mother had
found him common.
"Your father and I had better things in mind," she had said, in that clipped way
of hers.
In those days Maureen had not been one to listen to other people. So what if he
had no education. So what if he had no class. So what if he rented a basement room
and did so many jobs he barely slept. She looked at him and her heart tipped
sideways. She would be the love he'd never had. Wife, mother, friend. She would
be everything. (page 58)

Aha! So she was going to save and nurture him...bad bad start to a relationship! Why do we women tend to do that? :( An effective long-term relationship is a partnership, not a parenting relationship with one person managing/caring for the other all the time.

Sometimes she looked back to the past and wondered where the reckless young
woman was that she had been.
Maureen went through his papers, but there was nothing to explain why he was
walking to Queenie. There were no letters. No photographs. No half-scribbled
directions. All she discovered in his bedside drawer was a picture of herself just
after they were married, and another crumpled black-and-white one of David that
Harold must have hidden there, because she clearly remembered sticking it in an
album. The silence reminded her of the months after David had left, when the
house itself seemed to hold its breath. She put on the television in the sitting
room, and the radio in the kitchen, but still it was too empty and quiet.
Had he been waiting for Queenie for twenty years? Had Queenie Hennessy been
waiting for him? (page 58)

By now I was really wondering...exactly what had transpired with Queenie over 20 years ago?