Anne goes to college and receives more than just a degree!

Anne of the Island by L.M. Montgomery 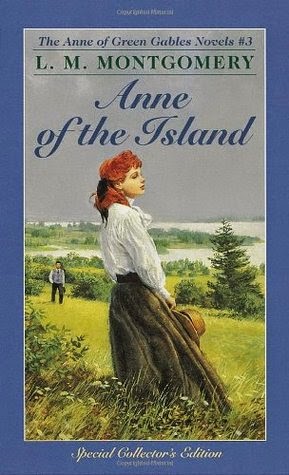 Join me for the third installment in the Green Gables Read-Along hosted by Reeder Reads! Although this was not my favorite book in this series thus far, I keep loving Monthgomery's writing! Perhaps it is just the stage of life in which we find Anne--college student fielding marriage proposals, rather momentous and life-altering. I was initially thrilled that Anne and Gilbert were going to be able to attend college at the same time, but that didn't quite work out the way I thought it might... And this cover did not, in my opinion, accurately reflect this book's story. But the series overall is amazing!!

So many truisms by which to live life in these books:

...she was richer in those dreams than in
realities; for things seen pass away, but
the things that are unseen are eternal.
(9)

Anne and Priscilla discuss their adjustment to college and Redmond:

Anne: I'm thankful that neither Mrs. Lynde nor Mrs. Elisha Wright know, or
ever will know, my state of mind at present. They would exult in saying 'I
told you so,' and be convinced it was the beginning of the end. Whereas it is
just the end of the beginning.

Priscilla: Exactly. That sounds more Anneish. In a little while we'll be
acclimated and acquainted, and all will be well. (25)

I admit to being rather surprised at Montgomery making fun of the Sloanes:

And oh, if only that dismal rain would stop pouring down as if the whole world
were weeping over summer vanished and joys departed! Even Gilbert's
presence brought her no comfort, for Charlie Sloane was there, too, and
Sloanishness could be tolerated only in fine weather. It was absolutely
insufferable in rain. (18)

And Priscilla, when Miss Ada asked her (in a reproachful way!) why she had allowed her prized cushion to be sat upon:

I told her I hadn't--that it was a matter of predestination coupled with
inveterate Sloanishness and I wasn't a match for both combined. (44)

Admittedly, I despise making fun of people for things they cannot help, but the repeated use of the term "Sloanishnessness" does make me chuckle! Although...poor Charlie!

I was so happy that Gilbert was "Big Man on Campus" and desired by all the girls! High time he got the attention and adoration he deserved! Besides being a top scholar, he was elected Captain of the Football Team!

I had to chuckle at Rachel's wish that Anne would never travel to "The States":

...The way girls roam over the earth now is something terrible. It always
makes me think of Satan in the Book of Job, going to and fro and walking up
and down. I don't believe the Lord ever intended it, that's what. (41)

Aaaahhhh...Mrs. Lynde's "that's what" makes me smile every time! How quaint and precious!

Philippa ("Phil") is quite the character. Again, I love how Montgomery introduces new characters in each book, and each of them adds so much! In discussing a walk in the park with Anne, Priscilla, Gilbert, and Charlie:

"But," said Philippa dolefully, "if I go I'll have to be gooseberry and that will
be a new experience for Philippa Gordon.
"Well, new experiences are broadening. Come along, and you'll be able to
sympathize with all poor souls who have to play gooseberry often. But where
are all the victims?"
"Oh, I was tired of them all and simply couldn't be bothered with any of
them today. Besides, I've been feeling a little blue--just a pale, elusive azure.
It isn't serious enough for anything darker." (43)

Hah! Montgomery's language kills me! The descriptive color of her mood and "victims" rather than admirers or boyfriends! It all makes me chuckle and laugh!

One of the scenes I liked best in this book was Davy's conscience punishing him more than anything else could after he leads Dora astray into truancy from church and Sunday School one fine Sunday morning:

"What's my conscience? I want to know."
"It's something in you, Davy, that always tells you when you are doing
wrong and makes you unhappy if you persist in doing it. Haven't you
noticed that?"
"Yes, but I didn't know what it was. I wish I didn't have it. I'd have lots
more fun. Where is my conscience, Anne? I want to know. Is it in my
stomach?"
"No, it's in your soul," answered Anne, thankful for the darkness since
gravity must be preserved in serious matters.
"I s'pose I can't get clear of it then, said Davy with a sigh. (101)

I adore Davy's honesty and openness! And his "I want to know"! And don't we all, especially when we're young...

As Ruby describes her regrets of a ruined friendship over something petty and now seemingly so "silly," I am once again struck by Montgomery's recurrent theme of misunderstandings and/or lack of communication ripping people apart from each other. I admired Anne's loyalty and devotion to her dying friend; that is difficult to do at any time of life, but especially when you're so young...

"All life's lessons are not learned at college. Life teaches them
everywhere." (111)

Although Anne took her education very seriously and studied hard, she also realized that everyday life offered much learning in and of itself! One such example was Diana's well-meaning use of Anne's story to advertise Rollings Reliable, earning Anne some money by editing, commercializing, and submitting her first short story in a publishing contest. Again, Anne is impressive in her maturity, squelching her shock that Diana had done this without her knowledge, though grateful for the money! And Gilbert proves his practicality:

"...One would rather write masterpieces of literature no doubt--but
meanwhile board and tuition fees have to be paid."
This commonsense, matter of fact view of the case cheered Anne a little.
At least it removed her dread of being laughed at, though the deeper hurt of
an outraged ideal remained. (115)

And we know how idealistic Anne can be!

Sharing my home with five felines, I was appalled at Phil's attempt to kill the kitty that followed Anne home! How awful! But he became "Rusty" and acclimated to Sarah-cat and Joseph, making it a three-kitty household. :) Of them Aunt Jamesina says:

And they did, once Sarah-cat put Rusty in his place "with one contemptuous sweep of her capable paw" and he and Joseph became best buds!

I was gratified that Anne was able to connect to some degree with her own parents, speaking with someone who had known them. As she stated:

"This has been the most beautiful day of my life. ... I've found my father
and mother. Those letters have made them real to me. I'm not an orphan
any longer. I feel as if I had opened a book and found roses of yesterday,
sweet and beloved, between its leaves." (147)

Having never met my own father, and having recently acquired part of a letter he wrote many years ago, I could relate to this. And yet, as Marilla contemplates her life:

...the coming of Anne--the vivid, imaginative, impetuous child with her
heart of love, and her world of fancy, bringing with her color and warmth
and radiance, until the wilderness of existence had blossomed like the rose.
Marilla felt that out of her sixty years she had lived only the nine that had
followed the advent of Anne. (148)

This passage brings tears to my eyes each time I read it. Anne could never fully realize just how much love and happiness she had brought to Matthew and Marilla, much as any child does for any parent...

"Weeping may endure for a night, but joy cometh in the morning." (238)

The rose of love made the blossom of friendship pale and scentless by
contrast. (240)

"I don't want sunbursts and marble halls. I just want you. You see I'm
quite as shameless as Phil about it. Sunbursts and marble halls may be all
very well, but there is 'scope for the imagination' without them. And as for
the waiting, that doesn't matter. We'll just be happy. Waiting and working
for each other--and dreaming. Oh, dreams will be very sweet now." (243)

This was the outcome for which I had hoped...

What is your reaction to this third book in the Green Gables series? Join us in this Reeder Reads read-along! I do believe L.M. Montgomery to be one of my absolute favorite writers EVER!!
Posted by Lynn @ Smoke & Mirrors at 5:58 AM