Not just one day, but many years...

One Day by David Nicholls 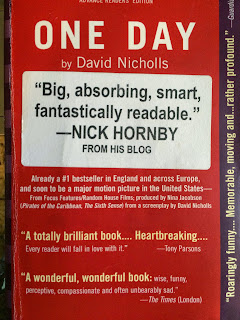 I realize this cover may not be one you have seen before for this book. It is the ARC I was sent as a Borders employee in early 2010, prior to the book's release. I was a "Fiction Expert" reviewer for Borders at the time. (I know, doesn't that sound official and show-offy? But truly, all you had to do was volunteer! I'm fairly certain there was no vetting process, just appreciation for us nerds who would help market books.)

I loved this book the first time I read it, recommended it to our book club, and we just discussed it yesterday, so wanted to publish a review while it's all still fresh in my mind. (I am old, you know--no reason to chance what might remain in my mind later on.) Please allow me to note that after five years I had forgotten more than I thought I had, and, as you might expect, it was not quite as enthralling the second time around just because I knew what happened...but I could still read it as a study of human nature and enjoy it immensely. One comment, having read one of Nick Hornby's books and not being particularly enamored by it, his recommendation had little to do with my interest in reading this, though I do agree with his reactions. 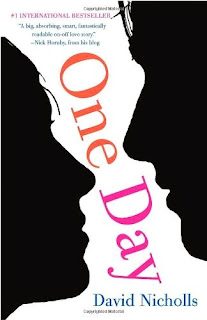 Of the five members attending, one could not get into the book at all, abandoning it after 140 pages, three others liked it to varying amounts, and I still loved it! This book felt particularly "British" to one member and was therefore a bit more difficult for her to get into. We did use the questions I had located as some starting points for discussion, but we all agreed that Dexter was quite unlikable until he finally appeared to grow up and overcome his addiction(s) though I was reminded at the very end of the book of the fact that Emma had ALWAYS held a special attraction for him from the beginning of their relationship. I really like this cover (to the right) for the book. I plan to watch the movie after completing this review of the book, so that will be interesting... One of our book club members prefers the movie to the book, but the rest of us had yet to watch it.

The format is a bit unusual as the book progresses, particularly at the end, though for me, that was especially effective, a couple of our book club members found it a bit confusing. It is always recommended to bring any story "full circle" and Nicholls did that spectacularly, in my opinion! Once I read a blurb describing The Unbearable Lightness of Being (having not read it yet myself), I realized the irony symbolized by the mention of this book early on.
'Let's just cuddle, shall we?'
'Of course. If you want,' he said gallantly, though in truth he had never really seen the
point of cuddling. Cuddling was for great aunts and teddy bears. Cuddling gave him cramp.
Best now to admit defeat and get home as soon as possible, but she was settling her
head against his shoulder territorially, and they lay like this, rigid and self-conscious for
some time... (11)
Dexter was "beautiful" and definitely a king with regard to the kingdom of "one-night stands." Emma was definitely not the type of female with whom he usually "hooked up." And that describes them throughout much of this novel. In their views of the future, they were quite different--she, idealistic though realistically focused and he, oblivious to much of anything regarding the future, particularly since he would be traveling the world throughout the summer. As one of our book club members noted, it was this financial independence that enabled his addictive behaviors and lackadaisical attitude toward adult life, and I suppose that is true to an extent. Though I know of two adult males who had no such financial independence and still ruined their adult lives, dying at young ages, as a result of addictions...so I believe it can happen to anyone regardless of their financial wherewithal.

Nicholls offsets serious issues with humor and irony.
Emma got a job pulling pints in the local pub, and time passed, and she felt her brain
begin to soften like something forgotten at the back of the fridge. (22)
That I could relate to very well! I worked in a job that was local to my community during one summer and I swore to never do that again! I really wanted to expand my horizons a bit and get to know different people. Emma writes to Dexter while working at her second job with the Sledgehammer Theatre Co-operative (Hah! What a name!) touring with 'Cruel Cargo,' an Arts Council-funded spectacular about the slave-trade told through the medium of story, folk song and some pretty shocking mime (16), about one of her co-stars:
[Candy's] Geordie accent is unbelievable, like she's had a stroke or something and she's
also got this thing about doing yoga in her lingerie. There, that's got your attention, hasn't
it? It's the first time I've seen someone do the Sun Worship in hold-up stockings and a
basque. That can't be right, can it? (18)
This passage made me laugh several times! Such humor is sprinkled throughout the book.
Dexter didn't like to think of himself as vain, but there were definitely times when he
wished there was someone on hand to take his photograph. (24)
Hate to tell ya, Dex, but in my humble opinion, that IS the definition of vain! :)
The attraction of a life devoted to sensation, pleasure and self would probably wear thin
one day, but there was still plenty of time for that. (25)
It definitely required a VERY long time before Dexter tired of pleasure-seeking for its own sake, regardless of others' feelings, etc.

It seems as if Dexter finally finds his niche as a TV presenter,
In rare moments of self-doubt, Dexter had once worried that a lack of intellect might hold
him back in life, but here was a job where confidence, energy, perhaps even a certain
arrogance were what mattered, all quantities that lay within his grasp. Yes, you had to be
smart, but not Emma-smart. Just politic, shrewd, ambitious. (62)
However, he manages to even mess that up! It is not long after that that Emma tells him,
'Dexter, I love you so much. So, so much, and I probably always will.' Her lips touched
his cheek, 'I just don't like you anymore. I'm sorry.' (210)
Another incident to which I could relate as I also cut ties with a person I truly loved, because his addictive behaviors were reprehensible to me and he was not the same person. It hurt so much to do that, but I felt it was necessary...I couldn't stand the heartbreak of watching him spiral downward.

Definite irony in the fact that Dexter had an affair with a student during his brief teaching stint, and then Emma (quite out of character, according to one of our book club members) has an affair with her principal during her teaching stint. None of us could figure out why, except that it was convenient and unattached sex for her, since he was married. As she describes one of their sexual encounters, she states that one day she would like to have sex on furniture that doesn't stack. (218) That had me laughing out loud!

I was bothered by Dexter being drunk while caring for his infant daughter. I know this happens, but it really bothers me. And to make matters worse, Sylvie knew he was drunk, but was more interested in her own extramarital affair then in the well-being of her daughter! Geeminy! Anyone can give birth, but not everyone is capable of decent parenting! :(

I was glad that Dex and Em did finally admit to each other their true feelings. I never did like Collum; he was just a creep! And poor Jasmine, she certainly had to adapt to many life changes in her first few years of life. (I would have loved to name a daughter Jasmine, however, I had three sons...so that didn't happen!) Have you read this one yet? One of our book club members felt it was depressing, however, I found it rather uplifting in the end. If you've read it, what did you think?

I am anxious to read his newest release, Us, which is not a sequel to this book. And...on to the movie adaptation! This book did remind me much of the movie City of Angels with Meg Ryan and Nicholas Cage--one of my favorites! Wonder if the movie will seem similar?
Posted by Lynn @ Smoke & Mirrors at 11:28 PM