Wedded bliss and motherhood for Anne 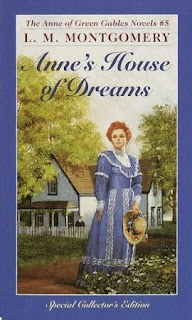 Although I was initially a bit disappointed that Anne would no longer be at Green Gables very often, I am NEVER disappointed in another installment of the Green Gables series! Thanks so much to Reeder Reads for putting this read-along together and heading it! I am so way far behind on my reading schedule for May I was uncertain if I could (1) get this read, and (2) complete a blog post, all before June 1st! But I have managed it! I have the usual 30 or more sticky notes in this book to mark those spots to which I wish to refer as I compose my review. However, overall, this is another favorite for me among the five I have now read in this series.

I adore Montgomery's writing in so many ways. She doesn't hesitate to include what, for me at least, is some challenging vocabulary. I love learning new words! Anne's life always includes some tragedy as well as all the good stuff, so it isn't as "Polly-Annish" as I might have feared. As Marilla notes in considering her feelings and the future once Anne and Gilbert are married, "every joy must bring with it its little shadow of sorrow." (2) And I still believe Montgomery is unsurpassed in introducing new characters in each book and making the reader feel as if you've known them all along throughout the entire series! Captain Jim, Susan, Leslie, Cornelia. These are just four of the newly unforgettable people in Anne's life. I admit I was a bit nostalgic about Anne and Gilbert moving away from Green Gables, because I was going to miss Marilla, Rachel Lynde, and the twins, Davy and Dora, so very much. But it was fortunate for Anne and Gilbert that he was able to locate a doctor willing to retire so Gilbert could take over his practice!

Anne's wedding is held at Green Gables, a very small and intimate affair, as one might expect of Anne--she only wanted those closest to her in attendance. And there was no honeymoon to foreign locations; Gilbert and Anne choose instead to spend their time in virtual isolation at their "House of Dreams" located on the water in a beautifully green and lush setting.
"I don't suppose we'll have four such perfect weeks again--but we've had them.
Everything--wind, weather, folks, house of dreams--has conspired to make our
honeymoon delightful. There hasn't even been a rainy day since we came here."
"And we haven't quarrelled once," teased Gilbert.
"Well, 'that's a pleasure all the greater for being deferred,'" quoted Anne. I'm so glad
we decided to spend our honeymoon here. Our memories of it will always belong here,
in our house of dreams, instead of being scattered about in strange places." (40)
How wise of her. I would agree.

Anne discussed the pros and cons of the new 'modern inconvenience'--the telephone. I had totally forgotten about the "party lines" of the past (Yes, I do remember them!), when you could literally hear others breathing as they listened to your conversation, and/or the sound of phones being hung up or picked up as you talked! That was a little creepy...to think others could listen. Though I was on my cell phone several years ago speaking with a friend out in California (I was in Indiana at the time) and all of a sudden she and I begin overhearing a conversation between a mother (located in Indiana) and her daughter (in California), then after a couple of minutes, I am speaking with the daughter and my friend is speaking with the mother, and our initial connection was broken! That was freaky! And proof that technology is not infallible! So, although we no longer have party lines...who knows?!? :)

In discussion of her upcoming wedding with Mrs. Harmon Andrews (her friend Jane's rather snooty mother), Anne responds to the mention of her red hair:
"Red hair is very fashionable now," said Anne, trying to smile, but speaking rather
coldly. Life had developed in her a sense of humour, which helped her over many
difficulties; but as yet nothing had availed to steel her against a reference to her hair."
(9)
Hah! Some things never change! :)

Anne describes her idea of the perfect marriage ceremony being performed in the orchard at dawn and Mrs. Lynde reacts:
"But that would be terrible queer, Anne. Why it wouldn't really seem legal. And what
would Mrs. Harmon Andrews say?"
"Ah, there's the rub," sighed Anne. "There are so many things in life we cannot do
because of the fear of what Mrs. Harmon Andrews would say. ''Tis true, 'tis pity, and
pity 'tis, 'tis true.' What delightful things we might do were it not for Mrs. Harmon
Andrews!" (13)
Oh, my, I feel that is particularly true in a rural area, so many worry about what others think. Geeminy! I remember all about that growing up in the rural small-town Midwest!

Then Phil delivers what is surely Anne's favorite wedding gift ever, Gog and Magog, the ceramic dogs from Patty's Place, where she and Phil lived while at college. Miss Patty and Maria were planning to will them to her, but decided they would give them to her while she was young. Awwww... What a sacrifice for them and yet what a wonderful gift to Anne. That made me love these two older sisters even more!

As Gilbert describes the house he has found for them to live in, Anne exclaims,
"Oh, I'm so glad! I couldn't live where there were no trees--something vital in me
would starve. Well, after that, there's no use asking if there's a brook anywhere near.
That would be expecting too much."
"But there is a brook--and it actually cuts across one corner of the garden."
"Then," said Anne, with a long sigh of supreme satisfaction, "this house you have
found is my house of dreams and none other." (11)
Montgomery describes the surrounding landscape of the "House of Dreams":
The woods call to us with a hundred voices, but the sea has one only--a mighty voice that drowns our souls in its majestic music. The woods are human, but the sea is of the company of the archangels. (54)

And so Anne was the first bride of Green Gables on a gorgeously sunny September afternoon.
Gilbert, waiting for her in the hall below, looked up at her [as she came down the
stairs] with adoring eyes. It was to him she was coming in the sweet surrender of a
bride. Was he worthy of her? Could he make her as happy as he hoped? If he failed her--
if he could not measure up to her standard of manhood--then, as she held out her
hand, their eyes met and all doubt was swept away in a glad certainty. They belonged
to each other; and, no matter what life might hold for them, it could never alter that.
Their happiness was in each other's keeping and both were unafraid." (21)
I admit to cringing a bit at the "sweet surrender" part! However, the ending seemed a bit more egalitarian, and after all, Gilbert had patiently waited...for years! It required him almost dying to bring Anne around. :)

And there were so many new and wonderfully delightful personalities among the friends Anne and Gilbert would make while living in their "House of Dreams." Captain Jim, though a "homely man"...had a "spirit shining through that rugged tenement [that] beautified it so wholly." (27) Though Miss Cornelia notes,
"Captain Jim is a good man, but he's kinda vexing in one way. You can't make him
mad. I've tried for over twenty years and he just keeps on being placid. It does sort of
rile me." (49)
In fact, Captain Jim and Miss Cornelia's relationship reminded me of my former mother- and father-in-laws' constant bickering! :)

Anne asks Miss Cornelia why she hates men:
"Lord, dearie, I don't hate them. They aren't worth it. I just sort of despise them. I
think I'll like your husband if he keeps on as he has begun. But apart from him, about
the only men in the world I've much use for are the old doctor and Captain Jim." (48)
Though I would say there's little difference between hating and despising, I can understand her not wishing to expend the amount of energy it requires to hate...

Anne becomes just a bit insecure when Gilbert heartily agrees Leslie is beautiful after his first meeting with her--she has a head full of abundantly shiny golden hair.
"Gilbert, would you like my hair better if it were like Leslie's?" she asked wistfully.
"I wouldn't have your hair any colour but just what it is for the world," said Gilbert,
with one or two convincing accompaniments. "You wouldn't be Anne if you had golden
hair--or hair of any colour but"--
"Red," said Anne. with gloomy satisfaction.
"Yes, red--to give warmth to that milk-white skin and those shining gray-green eyes
of yours. Golden hair wouldn't suit you at all, Queen Anne--my Queen Anne--queen of
my heart and life and home."
"Then you may admire Leslie's all you like," said Anne magnanimously. (80)

I'd like to think that if I had met Anne and Gilbert, I would have considered them to be of "the race that knows Joseph," too! :) You need to read this to learn about Anne's children, Joyce and James Matthew, and the whereabouts of Leslie's husband. Oh, and Miss Cornelia actually plans to be married at the end!! Shock! There is so much packed into these mere 227 pages! Have you read this series? I am love love loving it!
Posted by Lynn @ Smoke & Mirrors at 1:10 PM