There is a Joy Luck Club (by Amy Tan) Read-Along hosted by
Rachelle at The Reading Wench!
For this first Check-In we have read the first two chapters in the Feathers From a Thousand Li Away section: "The Joy Luck Club" and "Scar." 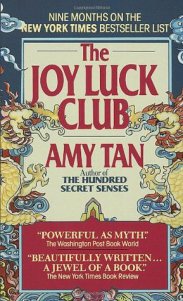 The book begins with a one-page 'parable' of a woman who emigrates to the U.S. with a swan, one which I can only assume was a victim of taxidermy. Upon arrival, the immigration officials confiscate the swan, leaving her only one feather, which she plans to gift to her daughter:
"This feather may look worthless, but it comes from afar and carries with it all my good intentions." And she waited, year after year, for the day she could tell her daughter this in perfect American English. (17)
After reading this, I could only assume that day never came to pass for this Chinese woman...

The Joy Luck Club is comprised of four couples: the Woos, the Hsus, the Jongs, and the St. Clairs. We learn that Suyuan Woo, Jing-mei Woo's mother, founded this 'Club' in 1949 and has died just two short months ago. Although Jing-mei has learned English as Suyuan desired, she is obviously not well versed in Chinese:
She said the two soups were almost the same, chabudwo. Or maybe she said butong, not the same thing at all. It was one of those Chinese expressions that means the better half of mixed intentions. I can never remember things I didn't understand in the first place. (19)
This definitely felt as if Jing-mei was at best disinterested in all things Chinese. Jing-mei's father asks that she serve as the fourth corner at the Joy Luck Club's mah jong table in her mother's stead. Suyuan had sensed that these other three women (An-mei Hsu, Lindo Jong, and Ying-ying St. Clair)
...also had unspeakable tragedies they had left behind in China and hopes they couldn't begin to express in their fragile English. Or at least, [she] recognized the numbness in these women's faces. And she saw how quickly their eyes moved when she told them her idea for the Joy Luck Club. (20)

Suyuan had founded the first Joy Luck Club in Kweilin, China, where her first husband, a Kuomintang (military) officer, had delivered her and their two young children as a location deemed safe from the invading Japanese.
"The hostess had to serve special dyansyin foods to bring good fortune of all kinds--dumplings shaped like silver money ingots, long rice noodles for long life, boiled peanuts for conceiving sons, and of course, many good-luck oranges for a plentiful, sweet life."
(23)
I was struck by the superstitious symbols used in this culture.

As she described the various immigrant factions living in exile in Kweilin, I felt grieved by the reality that this same travesty of justice and morality has continued unceasingly across the globe; there have always been various cultures/subcultures displaced by war...and, as we all are acutely aware, this continues in the present day. I never cease to be truly saddened by the fact that humans continue to mistreat, abuse, and kill each other. When will the peaceful 'collective consciousness' overtake the 'warring mentality'? I always hope it will be soon. :) (Just call me the eternal optimist!)
"Each week one of us would host a party to raise money and to raise our spirits. We were a city of leftovers mixed together. If it hadn't been for the Japanese, there would have been plenty of reason for fighting to break out among these different people." (22)
Ironically, perhaps the displacement of war tends to make humans much more tolerable of their fellow refugees. Though that feeling doesn't seem to persist and prevail once a sense of 'normality' is restored to their everyday life...rather, it seems the old prejudices and discrimination take hold once more.

Suyuan's description of the underlying theory behind the first Joy Luck Club reads much like many of the 'New Age'/modern-day or ancient Eastern philosophical foundations: these few chose not "to sit and wait for our own death with proper somber faces," but rather to "choose our own happiness." I view this as realization of the locus of control...which was NOT within their power--their only choice was in their reaction to their circumstances.
"It's not that we had no heart or eyes for pain. We were all afraid. We all had our miseries. But to despair was to wish back for something already lost. Or to prolong what was already unbearable." (24)
Yes, so wise...leave the past in the past, live for and be in the moment--just be there! 'Just do it'!
"Each week we could forget past wrongs done to us. We weren't allowed to think a bad thought. We feasted, we laughed, we played games, lost and won, we told the best stories. And each week, we could hope to be lucky. That hope was our only joy. And that's how we came to call our little parties Joy Luck." (25)

As Jing-mei interacts with and watches the other 6 'Aunties' and 'Uncles' and her father, "it seems...my mother's life has been shelved for new business," since the only mention of her death is in the recited 'minutes' of the previous meeting.
I wonder what Auntie An-mei did to inspire a lifelong stream of criticism from my mother. Then again, it seemed my mother was always displeased with all her friends, with me, and even with my father. Something was always missing. Something always needed improving. Something was not in balance. This one or that had too much of one element, not enough of another.
The elements were from my mother's own version of organic chemistry. Each person is made of five elements, she told me.
Too much fire and you had a bad temper....like my father...
Too little wood and you bent too quickly to listen to other people's ideas, unable to stand on your own....like Auntie An-mei.
Too much water and you flowed in too many directions, like myself...
I used to dismiss her criticisms as just more of her Chinese superstitions, beliefs that conveniently fit the circumstances. (31)
Oh, can I ever relate! My own mother also constantly criticized and was always unhappy with everyone and everything in her life. Although perhaps Suyuan had valid reason as she may have never completely grieved the two children and first husband she was forced to abandon in China.

The women retire to the mah jong table in a back room:
...I can tell before everyone sits down. The chair closest to the door has an emptiness to it. But the feeling doesn't really have to do with the chair. It's her place on the table. Without having anyone tell me, I knew her corner on the table was the East.
The East is where things begin, my mother once told me, the direction from which the sun rises, where the wind comes from. (31)
As the other three women talk about her mother, Jing-mei realizes
...My mother and I never really understood one another. We translated each other's meanings and I seemed to hear less than what she said, and while my mother heard more. (37)
Though again, it sounds as if Suyuan was much like my mother with whom there really was no 'conversation,' rather you were simply forced to listen to a seemingly endless diatribe each time, hoping you weren't the target of the criticism and negative energy.

These women are the typical back-biting hypocritical females which I have always avoided, both in childhood and as an adult, "It's the same old game, everybody talking in circles." These women keep making back-handed comments as if playing a game of tennis, trying to pelt Jing-mei and each other with thinly veiled criticisms and jabs. Though in the end they prove their loyalty and kindness as they present Jing-mei with the address of her two sisters (Suyuan's first two children left in China) and $1200 to fly to Shanghai to tell them about her/their mother's death and life. Her aunties and uncles and father have all sacrificed their usual end-of-year banquet to send her to China so she can meet her two sisters. She realizes the symbolism in the fact that she is
sitting at my mother's place at the mah jong table, on the East, where things begin. (41)
And this is certainly a beginning...

An-mei Hsu's story of the scar is heart-breaking and haunting. It is shocking to me to read of the stories told to children to scare them into 'behaving' well and to force them to always obey. I rarely ever used fear as a motivator with my own children, considering it to be ineffective in the long-term. You might believe you have accomplished good behavior in the short-term, but you have instilled so much more that is negative, and in my opinion, simply wrong.
...a ghost who tried to take children away, especially strong-willed little girls... (2)
It is a certainty that ghost would have gotten me! :) Her mother has been exiled from the family and she and her brother are being raised by their aunt and uncle, and Popo, her grandmother, her mother's mother. Popo becomes very ill when An-mei is nine years old and her mother miraculously reappears and brews a special potion to try to save her mother. An-mei watched as her mother cut flesh from her arm and added it to the concoction. Popo did die that same night, though not before passing along some gems of wisdom:
"If you are greedy, what is inside you is what makes you always hungry."
"Your own thoughts are so busy swimming inside that everything else gets pushed out."
Another time, Popo told me about a girl who refused to listen to her elders. One day this bad girl shook her head so vigorously to refuse her auntie's simple request that a little white ball fell from her ear and out poured all her brains, as clear as chicken broth. (43)
Yikes! How can anyone grow into adulthood and be halfway well-adjusted when they're fed such awful stories and visions? An-mei describes her aunt as having "a tongue like hungry scissors eating silk cloth." That kinda made sense to me, since I could easily describe my own mother using the same words. :)

Following the pot of scalding hot soup pouring on An-mei's neck when she was four years old, Popo described the funeral clothes made for her and informed her
"Even your mother has used up her tears and left. If you do not get well soon, she will forget you."
Popo was very smart. I came hurrying back from the other world to find my mother.
(47)
The following could be used to describe both the physical healing of the burn and the emotional 'healing' of her mother's departure as mandated by her own family...
In two years' time, my scar became pale and shiny and I had no memory of my mother. This is the way it is with a wound. The wound begins to close in on itself, to protect what is hurting so much. And once it is closed, you no longer see what is underneath, what started the pain. (47)

Have you read this book or any others written by Amy Tan? I am fascinated by this one. The Chinese culture with its superstitions and what appear to me to be far-fetched beliefs seem unbelievable. What a shock for those who immigrated into the U.S. Perhaps that is one reason Chinese immigrants tend to socialize only with other Chinese immigrants. At least I see that happen quite often amongst graduate students faculty on U.S. campuses. Your thoughts?
Posted by Lynn @ Smoke & Mirrors at 5:17 PM