A bit darker than my usual read...but AMAZING!

Serafina and the Black Cloak
by Robert Beatty
Title is always linked to a synopsis of the book.
Book trailer can be seen here. 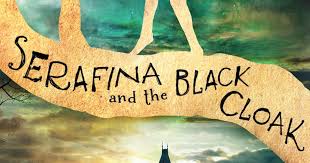 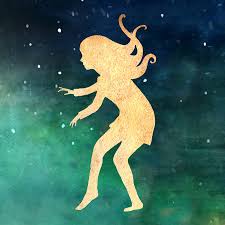 Per my usual, I selected this book without knowing much of anything about it!
(I love to surprise myself, after reading just a brief blurb!)
This book was amazing, and since it was published by Disney Hyperion,
and the above-linked book trailer is equally amazing,
I'm bettin' this is in movie production soon.
And here is an article from the Citizen-Times which I believe to be a newspaper
based in Asheville, North Carolina.
This gives some brief history of Mr. Beatty and how this project evolved.
Upon reading this article, Beatty is one of those people for whom I hope
the greatest of success abounds! What a wonderfully poignant story!
But...back to this awesome book!
You might recall this book was a Goodreads Choice Award nominee for both
Debut Goodreads Author and Best Middle Grade and Children's Book in 2015!
I added it to my TBR listing just as soon as I saw it.
Then while in the children's section of the library one day,
I saw it on display...and just grabbed it!
And I am so glad I did!
(If you don't know me very well you might ask what I, a 60-year-old woman. was doing
in the "Children's Section" of the library. Although I no longer have children in my house,
I do have 11 grandchildren, and they are my current 'excuse' for still reading and
immensely enjoying 'children's literature! Here are some I have reviewed on this blog.)
This counted for the following challenges: 20 Books of Summer (2016),
2016 Cloak and Dagger, 2016 Southern Literature, and Historical Fiction. 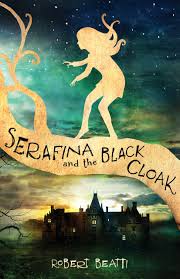 It is immediately apparent that Serafina is no typical young girl! She lives with her father, hidden in the basement of the Biltmore Estate. How, you might ask, is that accomplished? Mmm...very carefully? Yes, that would be the answer. However inexplicable or impossible this may initially appear, it is at once made believable by the historical knowledge that Serafina's "Pa" helped to construct the estate and indulged himself with a free, though perhaps less than desirable to most people, place to live, hidden away behind the boiler in the protection of the workshop. Since her father was still employed by George and Edith Vanderbilt to maintain the generator and other aspects of the mansion, this was possible.

As a person who shares her house with 4 kitties, I was immediately struck by the similarities between feline and child:
She had spent most of the day napping in her favorite out-of-the-way places (1)
Her first thought as she looked around her and listened out into the reaching darkness
was that it felt like a good night for hunting. (2)
Careful not to wake [her father], she slinked off her mattress, padded across
the workshop's gritty stone floor, and snuck out into the winding passageway.
She loved to prowl through the endless corridors and shadowed storage rooms.
She knew the touch and feel, the glint and gloom, of every nook and cranny.
This was her domain at night, and hers alone.
She hear a faint slithering just ahead. The night was beginning quickly.
She stopped. She listened.
Two doors down, the scrabbling of tiny feet on bare floor. (3)
When she was ten years old, she finally asked, "Do I have a job like everyone else, Pa?" He replied of course, "an extremely important position,...I reckon you're Biltmore Estate's C.R.C...you're the Chief Rat Catcher." Serafina had left dead rats she had captured during the night beside her father's cot when younger. This reminded me so much of the first (and only, thankfully!) time my 18-year-old Smokie had done this. 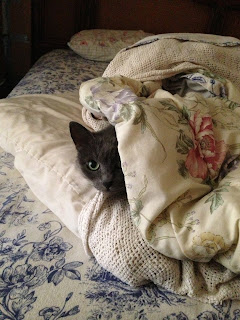 She was about four months old when she left a dead mouse on top of my pillow one night! I understood this as an offering to demonstrate her prowess, but... Needless to say, I was just grateful to have looked down and noticed it before I unsuspectingly jumped into bed. I realized the importance of this 'ritual,' so I very gently picked Smokie up, holding her in one arm, while with my other hand, I grabbed a Kleenex, picked up the mouse by its tail, and explained to Smokie as we walked down the stairs and out of the house, that although I could appreciate her skill and willingness to 'hunt,' this was not an appropriate place to leave such 'offerings.' I was living in the country, with no more than 0-2 houses per square mile, so I had to always keep traps set, 'cause there were mice who inevitably made it inside every once in awhile. Though she did manage to hunt others and 'play' with them until they died, she never brought them to my bed ever again, leaving them where they lay. (I knew she understood!) :) And, of course, those were mice, a totally different animal than a rat! Rats grow to be very LARGE in comparison and can cause tons more damage. And rats...well, they're detestable! Though I do know two people who keep rats as pets...that is different...at least for them, though not for me! ;)

As she releases her latest two conquests into the forest, for the first time she could remember she was intensely drawn to enter the forest and explore "beneath leaf and twig,...rocks and dells, the streams and wonders."
"Never go into the forest," he had told her many times. "There are dark forces there that no one understands, things that ain't natural and can do ya wicked harm." (8)
Serafina is 12 years old now and beginning to question some things about her life:
"...keep yourself scarce...Don't let anyone get a good look at you...
don't tell anyone your name or who you are."
...she didn't know exactly why she and her Pa lived the way they did.
She didn't know why her father hid her away from the world, why he was ashamed of her,
but she knew one thing for sure: that she loved him with all her heart,
and the last thing she ever wanted to do was to cause him trouble. (11)

Once Serafina witnesses what she assumes to be evil black magic at work in the bowels of the Biltmore basement, a dank and dreary portion where she has never before ventured, she is now the 'hunted' and coaches herself through hiding and remaining as still and quiet as possible, telling herself, "Just stay still, little mouse," although she
"wanted to break cover and flee so bad,...she knew that the dead mice were the dumb mice
that panicked and ran. She told herself over and over again,
"Don't be a dumb mouse. Don't be a dumb mouse." (25)
Though her plight was seriously dangerous, I did have to chuckle at her 'self-coaching' to remain silent and still, thereby avoiding detection. It is the next day that she decides to go upstairs to tell someone what she witnessed the night before, since her father doesn't believe her story. It is then that she meets 'young Master,' Braeden, the orphaned nephew whom George and Edith have 'taken in' to their home and treat as their own child. Braeden has a 'way with animals' that goes beyond the realm of typical 'human-animal interaction' and he seems to be able to connect with Serafina in much the same way. This one meeting and its aftermath unleashes a series of events, conversations, and situations that eventually make Serafina aware of her own origin, lead her to suspect one member of the Vanderbilt guest party of being an evildoer, and meet her own mother, 'face-to-face,' as it were!

As Serafina learns more about "the man in the Black Cloak," she realizes that
...just about everyone had a special talent or skill, something they were naturally
drawn to or good at, and then they worked years to master it.
Nobody knew how to do everything. It wasn't possible...
It made her think that maybe God intended for them all to fit together,
like a puzzle made whole. (129)
Though I do not personally believe in God, I do believe this is the overall meaning of life for everything on this planet Earth--we are to work together to make a "whole" planet/environment. I love this bit of philosophy Beatty has embedded! Little does she realize just how much she has already 'pieced together' of this mystery and its underlying solution. It is the inscription on the winged Angel monument in the green glade next to the haunted cemetary that initially puzzles her:
OUR CHARACTER ISN'T DEFINED
BY THE BATTLES WE WIN OR LOSE,
BUT BY THE BATTLES WE DARE TO FIGHT. (139)
Serafina does not hesitate to choose the most dangerous battle of all--'uncloaking' the Man in the Black Cloak, serving as bait to lure him to his undoing...

Braeden gives her the very first wrapped gift she has ever received in her 12 years, and unwittingly supplies her with an appropriate 'costume' to use in her most dangerous mission. Though Serafina knows she is a 'creature of the night,' she decides that through her own actions she will prove herself to be of either 'darkness' or 'light,' though she's heard many people speak of 'creatures of the dark' as purely 'evil.'
She knew now that there were darker forces in the world than she had ever imagined,
and brighter ones, too. She didn't know exactly where she fit into it all,
or what role she would play, but she knew now that she was part of it, part of the world,
not just watching it. And she knew that her fate wasn't set by how or where she was born,
but the decisions she made and the battles she fought.
It didn't matter if she had eight toes or ten, amber eyes or blue.
What mattered was what she set out to do. (292)

It seems this idea of determining your own fate has been a theme
throughout several of my recent reads:
We Could Be Beautiful by Swan Huntley and
A Desperate Fortune by Susanna Kearsley, to name two.

I do admit that I felt this was a bit scary for children.
But each of us has a different threshold for such things...
I had the same feeling as I had when I first read
Harry Potter and the Goblet of Fire by J.K. Rowling,
that it was darker than books I usually read
or am comfortable reading.
But, just as with the Harry Potter book,
I did find this one to be quite enjoyable and
I am anxious to read Serafina and the Twisted Staff,
the second installment in the now-christened Serafina series.
It was released July 12, 2016. 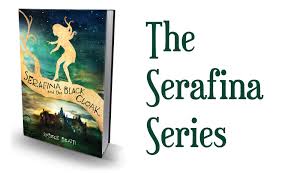 Have you read either
of these yet?

I can highly recommend
the first in the series!

I cannot imagine each future installment won't be just as intriguing!