The Grapes of Wrath by John Steinbeck 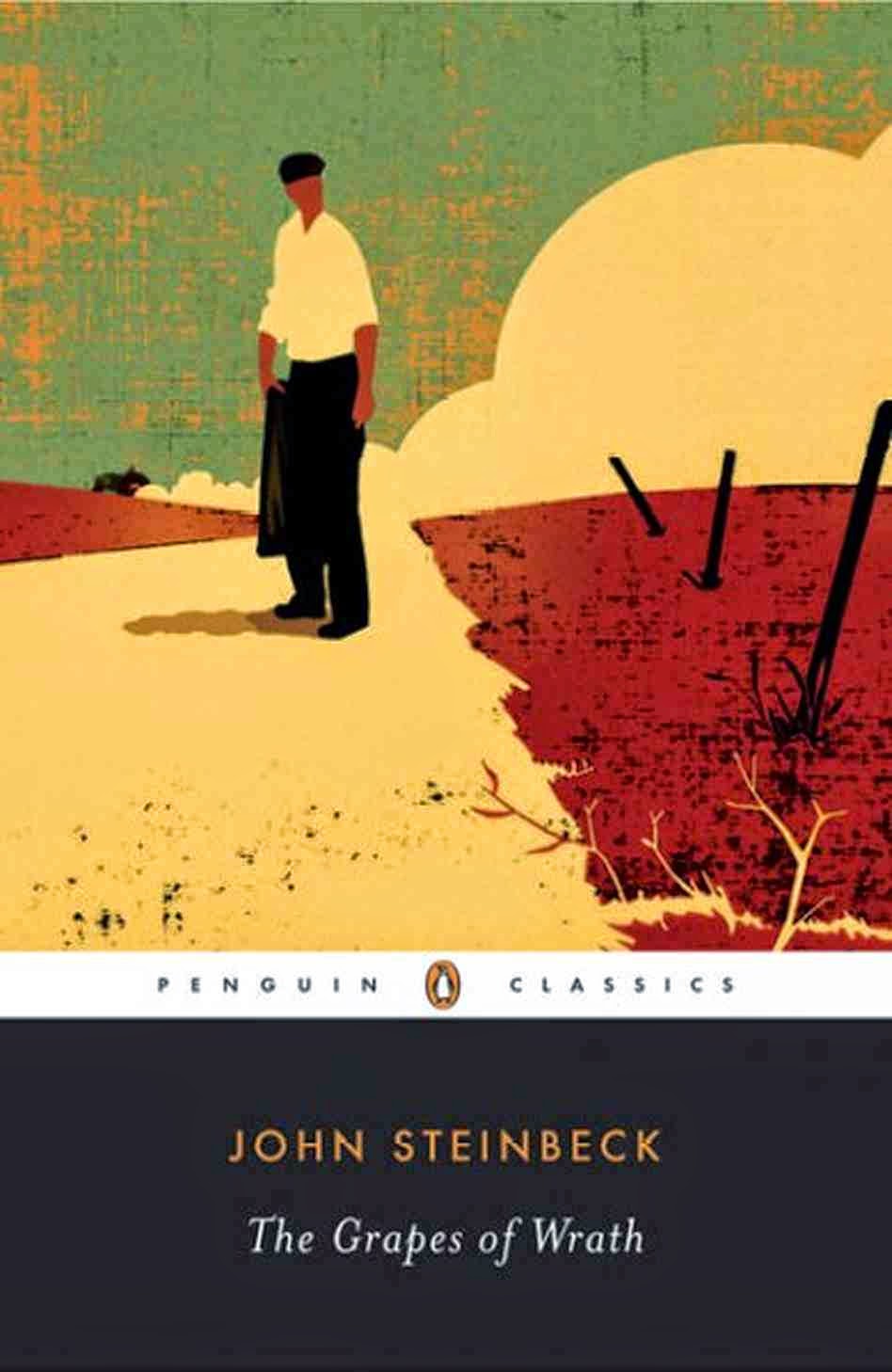 This is a larger-than-life novel!! Although quite intense, it is so very readable! If you decide to read or (as in my case) reread it, please obtain this Penguin Classic version (ISBN 978-0-14-303943-3). The 34-page introduction written by a Steinbeck scholar, Robert Demotte, is not to be missed. There is so much pertinent background material that makes you realize Steinbeck literally put his heart and soul into researching this novel over the course of a decade, though it only took 100 days for him to actually write it! Awards conferred upon this work: National Book Award (1939), Pulitzer Prize (1940), and it was cited prominently when Steinbeck was awarded the Nobel Prize in 1962. For once I totally agree that this novel is so very deserving of such accolades!

I originally started rereading this after some 43 years as part of the NPR GoW 75th Anniversary Read Along. This link takes you to the first of three online discussions, the last of which was led by the National Steinbeck Center scholar-in-residence, and author of On Reading the Grapes of Wrath, Susan Shillinglaw. I became too busy to participate in the third/last session, but have read the comments/discussion. (Links to these later sessions are located on the right as you scroll down a bit.) I found it fascinating to read others' comments on this timeless masterpiece. So scary how it still relates all too well to our world now!

I now remember how dreary this novel seems in the aftermath of completing it, and yet, there is also that glimmer of "hope," be it ever so dim and faraway. How to define that bit of "hope"? The answer is quite complex, as when contemplating anything about this novel. It is as if Steinbeck overlooks nothing in his social commentary: familial relationships, the breakdown of an agrarian society, the unbridled greed of corporate/business/banking entities, gender roles, organized religion and just "preachers," corruption among those with money and the "police"/law, and symbolism for almost every word written in this work. Steinbeck's word choice actually elicits visceral reactions for many readers, me included, and not just once or twice, but repeatedly throughout the novel. It would be very easy to teach a one-semester course based upon this work alone, there is so much to be discerned and teased out and related to so much else in our world: other literary works, social commentaries now and then, etc. Absolutely fascinating! I am so very glad I reread it 40+ years later; my interpretation now is so much more intense and fulfilling!

I am literally scared as I read and complete this novel...scared that it could all happen again, in the present-day U.S. I'm not sure what could or would ever happen to make that impossible, but at present, I feel the corporations and elite rich folk have enough power and control to wipe out many, if not most, of the lower SES folks, at their whim. Although I've always considered myself an eternal optimist, the past 12-15 years have demonstrated this possibility in the ever-lower wages for most U.S. lower- and middle-class jobs, and the ever-increasing numbers of working poor who slip lower and lower, into poverty or below, on the economic scale. While corporations get to deposit and hold their profits overseas and evade paying U.S. taxes, set pricing, exploit world labor for the cheapest wages and most dangerous settings. Overall, the setup is much the same now as it was then.

As Steinbeck notes repeatedly throughout this novel, it is only by organization of the masses to strike, that any change will occur. However, as also noted by Casy and others, men must be willing to sacrifice their own lives, and that of their families, in order to "fight back" at all. We see that many of these men must have separated themselves from family in order to pursue such noble yet dangerous causes. Perhaps it is this conflict that upsets me the most, the fact that even if a person can understand the source and continuing manipulation of the migrant masses, the "common man" has little to no recourse without being killed. We have certainly witnessed this throughout history in so many ways and times. However, as is noted many times in this novel, for every step taken forward, or gain in civil rights, there may be steps backward, but never totally back to the beginning, it continues to improve, little by little, through the advances and retreats... I am using the term "civil rights" in an extremely broad sense, to include workers' rights, equality among genders (purposefully included more than just two...) and people of all heritages/backgrounds, overall a respect for each and every human to have equal access to all societal entities and opportunities for growth and development.

It interests me that the message I take away from this novel, that we all must help each other in any way we can, is echoed by so many present-day "philosophers." I could try to name them all, but it seems the list would be endless. I do believe that the human race is slowly but surely realizing this really is all each of us can do for the world/Universe, but without that, there truly is no hope for this species. Of course, the ultimate goal is to grow these numbers of people who are motivated thusly in their daily behaviors and intentions to a critical mass that will actually change our man-made society for the better. James Redfield is the first "modern-day" spiritualist I've read who echoed this philosophy and took it a step further. In the years since first reading The Celestine Prophecy, I have developed a very practical life philsophy of exactly this sentiment: try to leave each person I encounter throughout the day a little better off for having interacted with me, in whatever way that is possible, based upon mutual respect, kindness, and compassion. Simple. Hands-on. Practical. It never ceases to amaze me how this simple philosophy in action seemingly allows me to spot those who profess to live their life this way, typically under the guise of organized religion, and yet, in reality, do not... Perhaps their intentions get lost in all the ritualism, etc.,

Have you read this classic? If not, you really really should. It is timeless and there is so much to say about it. I could easily create 20 different posts analyzing so many aspects of this text, but basically, that has all been done and is available online. (I have 10 pages of notes and so many post-its in the book, you can hardly see the edges of the pages!) You could start with the NPR link above for that... Rereading this now has reinforced my beliefs about the importance of each individual contributing whatever they can to better this world. No contribution is too small. And that is the way I will continue into 2015... Happy New Year!
Posted by Lynn @ Smoke & Mirrors at 4:58 PM