My Man Jeeves by P.G. Wodehouse

I admit I didn't resonate with this book nearly as much as most people do or have done. I guess perhaps for the same reason(s) that I believe I probably would not enjoy watching Downtown Abbey if I watched television. Although I did laugh in some places and chuckle in others, overall I just didn't connect very well with this one. 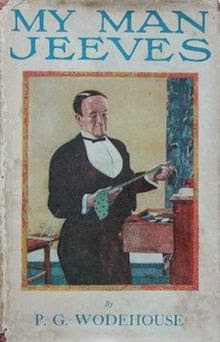 Firstly, this was a collection of short stories, and I truly expected a novel. That was somewhat of a disappointment to me. Secondly, there were really only two of these, the first, Leave it to Jeeves, and last, The Aunt and the Sluggard, that I felt were entertaining. Overall, the parts I found most enjoyable were the self-effacing remarks/realizations by Bertie Wooster of what Jeeves must think of him on occasion.

"To complete the character-study of Mr. Worple,
he was a man of extremely uncertain temper,
and his tendency was to think that Corky was a
poor chump and that whatever step he took in
any directions on his own account was just
another proof of his innate idiocy. I should
imagine Jeeves feels very much the same
about me." (page 13)

Jeeves develops a scheme that backfires (most of them do, by the way) so that Bertie's friend, Corky, a portrait painter who has never even painted one portrait over many years, has now lost his fiancé to his uncle, Mr. Worple, whom she has now married and ironically presented with a son/heir. Unfortunately, this now cuts Corky out of any expected inheritance, though he has now been commissioned to paint a portrait of his own ex-fiancé's child, ostensibly his new cousin.

"It's my uncle's idea,...Muriel doesn't know about it yet. The portrait's to be a
surprise for her on her birthday. The nurse takes the kid out ostensibly to get a
breather, and they beat it down here. If you want an instance of the irony of fate,
Bertie, get acquainted with this. Here's the first commission I have ever had to
paint a portrait and the sitter is that human poached egg that has butted in and
bounced me out of my inheritance. Can you beat it? I call it rubbing the thing in
to expect me to spend my afternoons gazing into the ugly face of a little brat who
to all intents and purposes has hit me behind the ear with a blackjack and swiped
all I possess. I can't refuse to paint the portrait because if I did my uncle would
stop my allowance; yet every time I look up and catch that kid's vacant eye I
suffer agonies." (pages 23-24)

In the end, the portrait is a total flop, his uncle is livid and stops his "allowance," but Jeeves has yet another brilliant suggestion--that Corky pursue drawing for the comics.

'If I might make a suggestion, Mr. Corcoran - for a title of the series which you have
in mind - "The Adventures of Baby Blobbs."'

Corky and I looked at the picture, then at each other in an awed way. Jeeves was
right. There could be no other title. (page 30)

It seemed that every story involved someone trying to simply sponge off a relative or claim an inheritance so they didn't have to work for a living. That bores me after a story or two.
I prefer to be productive, at all costs! In addition, I can handle only so much of one person being totally dependent upon another person for each and every decision/action in their life, as Bertie Wooster was with Jeeves. Yikes! I can't begin to imagine having so little independence and self-confidence! Not my type of person!

This "book" could never have been written without the phrases "Leave it to Jeeves," as uttered by Bertie and "Very good, sir," as spoken many times by Jeeves. After all, as Bertie states repeatedly of Jeeves, "That's the sort of chap he is. You can't rattle him."

I am glad to have read this since it is referred to so often, but other than that I only found it to be mildly entertaining. Fortunately, it was short and a quick read! Now on to other books which I'm sure will be more enjoyable! How about you? Have you read any of this series by Wodehouse? What was your reaction?