Go Tell It on the Mountain
by James Baldwin 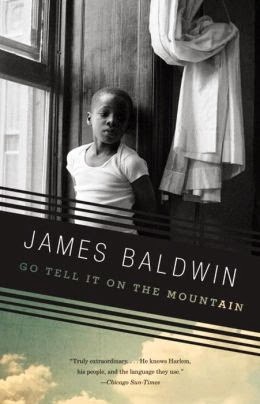 This is one classic I am ever so grateful to have read. Many years ago I had read parts of Notes of a Native Son and was so impressed with the powerfully direct writing style. This novel resonated for me on so many levels. As with any classical book I plan to read, I purposefully did not research prior to reading. I much prefer to form my own unique reactions to a text with as little "interference" from others as possible, then research based upon my desire to know more once I have formed my own opinions... Baldwin claimed this book to be "semi-autobiographical," assuming that John is to represent him.

This is quite a stinging commentary on the rigidly strict religious institutions and practices of the day for a storefront church in Harlem. Baldwin drops hints to the reader from the very beginning. On pages 3 and 4: "Sarah, who wore a red ribbon in her hair that day, and was fondled by her father." I don't remember that Sara's age is revealed, but I guess her to be at least 6 or 7 years old, and there is no further mention of any sexual abuse in John's home (at least that I can recall), but there is this little "slip of the tongue," if you will. Baldwin depicts the father's unwieldy righteousness as he "doctors" Roy, his youngest son's wounds, without ever considering the boy's own culpability/responsibility for the fight. Gabriel eventually blames his wife/the boys' mother, slapping her as hard as he can in the face, to which Roy reacts:


"Don't you slap my mother. That's my mother. You slap her again, you black bastard, and I swear to God I'll kill you."

Following this, Gabriel beats Roy with his belt, whispering "My Lord, my Lord, my Lord, my Lord." This made my stomach lurch as I reacted viscerally to this self-righteous protestation of "doing the Lord's will." Using religion to justify abuse is just about as low as any individual can get, in my opinion!

He has no true defense as his sister Florence observes:


"Yes, Lord, you was born wild, and you's going to die wild. But ain't no use to try to take the whole world with you. You can't change nothing, Gabriel. You ought to know that by now." (p. 44)

Although this particular book is set in Harlem and the characters are black, this could be any race/religious combination--there are many examples in our world today where religion is used as a basis for abuse, particularly among family members, and especially with regard to absolute patriarchy where males are granted unquestioned power to control and manipulate family members in any way they see fit. And this is one of my first complaints about many (okay, most) organized religions. I could not discern that religion had actually improved Gabriel much as a person. Granted, once he was "saved," he did stop carousing every night in the bars, getting drunk, passing out in the ditch, and screwing any woman he met, but then he adopted a "holier than thou" attitude. Gabriel was quite a conflicted character: although he married Deborah who had been gang-raped by white men as a teenager and shunned by many/most, he really never seemed to love her, in fact as she remained barren throughout their marriage, he grew to actually hate her...for her ugliness and the fact that she could not get pregnant. (I assume the rape had left her physically unable to establish a pregnancy.) He was truly a mean man who didn't appear to have much empathy or sympathy...for anyone.

Admittedly, I had to become accustomed to the dialect and the use of words in this book that I would never think of uttering, nor would I accept others using, especially other white folks like myself. However, I do believe it is this honest and accurate dialogue that contributes so very much to the power of this book--and it is powerful! Gabriel's sister, Florence states to her husband, (p. 84), "Being a preacher ain't never stopped a nigger from doing his dirt." Florence had just received a letter from Deborah (Gabriel's wife) detailing her belief that her husband has an unclaimed illegitimate son living in their town.

He had begun to whistle again; he stopped. "A murderer? How so?"

"Because he done let this child's mother go off and die when the child was born. That's how so." She paused. "And that sounds just like Gabriel. He ain't never thought a minute about nobody in this world but himself."

One of the things I appreciated most about this book was the insider's view of the life experiences that can build such hypocrisy into people's psyche and behavioral patterns. Gabriel and Florence were raised by a mother who constantly intoned "the Lord" into their daily lives, insisting each of them MUST be "saved." (I wondered just what kind of person she really was, as she was so manipulative of her children to get what she wanted--someone to take care of her.) Though what does that really mean?  An individual may complete certain actions, but does that truly change their outlook, attitudes, and behaviors? Gabriel was proof that outward behaviors can change, but a heart may remain just as hard as ever. Having once succumbed to a "charismatic" Methodist and been "saved" as a young teen, I truly believe this can simply be the product of emotional turmoil and fervor created by others. (As with John.) Once I began questioning the validity of these "beliefs" in an objective and logical sense, I was searching for something much more practical and applicable to everyday life, without a deity.

Interestingly, in his first years as a preacher in the south, Gabriel was quite successful as an evangelist and was in demand to travel and preach, though he cited the hypocrisy among the "older" preachers and wanted to make sure he was never like them, however, he soon proved to be just as much a hypocrite, if not worse, seducing a woman and sending her off with money he and his first wife, Deborah, had saved when she admitted she was pregnant. Then to treat his family as he did. And like his mother did to him, he expected his children to all be SAVED, too. .

I had a feeling about John's observations of Elisha, the 17-year-old preacher's cousin who had himself just become a preacher in his own right; that he may be attracted to Elisha in ways other than just idolizing a fellow teen a few years older who had already accomplished so much. And I learned in later research, Baldwin did "come out" as gay. (I thought I had remembered that somewhere...) Now I really want to read his book Giovanni's Room.

The last scene of this book is so thought-provoking! Although John has finally succumbed and become "saved," it is obvious that he perhaps now fears his stepfather Gabriel even more so than before, for now that he is saved I can believe Gabriel may well beat him even more, to "help" him stay on the straight and narrow path, of course. (All in Christian love...) Sadly, I felt that John is damned if he is "saved," and damned if he isn't... I think Gabriel just got off on the power trip of beating his children and wife. Ironically, although John is not Gabriel's biological son, he is the boy who seemingly "obeys" and does what is expected of him, as opposed to Roy, Gabriel's biological son, who is the opposite, much as his father was as a youngster.

If you haven't read anything written by James Baldwin, I would highly recommend this book. So powerful, so intense, yet so very readable!
Posted by Lynn @ Smoke & Mirrors at 4:38 PM