But who will save Marissa and Jack? 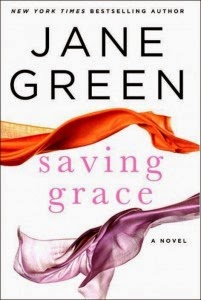 This is the first of Jane Green's novels I've ever read. It will not be the last! Although it took more than 50 pages for me to really get into this book, I honestly believe that was due more to the nature of other books I'd recently read and my fear that this would be just another "obsessive character" book. Fortunately, that fear was unfounded! I had just read three books that I considered to be intense: The Girl On the Train, The Round House, and The Bishop's Wife (Literary Wives review to be posted Monday, April 6th!), and when I started reading this I just couldn't continue until I'd read something "not so intense"! (Hence, reviews of Choldenko's Al Capone series for kids will be posted soon!)

This book was not as creepy as I'd feared it might be; it was much more centered on Grace's recovery than I expected, and that made this reading experience much more enjoyable for me. If not for the fact that I will be meeting the author later this month, I would have probably selected a different book written by her to read first. I own several more of her books and look forward to reading them!

Obviously, life with Ted was no picnic! An efficient assistant had made life so much easier for Grace, in that Ted was cared for and appeased most of the time. I would describe his personality as mercurial, at best, but definitely emotionally and verbally abusive at worst.

She has learned that if she removes herself, he will frequently take his rage
elsewhere, distance allowing it to simmer before disappearing. But if Grace is
there, if he sees her, she becomes an unwilling victim of a predator who will not
leave her alone until he is sure she is completely destroyed.
He doesn't mean it, she thinks, when he is back to being kind, loving,
appreciative. He has terrible mood swings, which is part of what makes him a
creative genius. I should be grateful, she tells herself. If Ted weren't allowed to be
this kind of person, he wouldn't be able to write the books he does, wouldn't be the
success he is.
I mustn't take it personally, she tells herself all the time, even as she feels her
ears ringing with stress. (2)

And what is that?!? Ahhhh...rationalization of an abuse victim, that's what! I would like to think Ted could have been just as successful if he had learned to be more even-tempered. Grace has always learned to tiptoe around others' behaviors, as she constantly had to do with her own mother, in order to cope. She eventually realizes that living with Ted mirrors living with her mother in many ways. This reminded me of the psychological theory that most people recreate their childhood environments in adulthood, selecting partners exhibiting much the same behaviors as their main caregivers. To a great degree, I feel I followed this same path in my first marriage, so I could relate to Grace. However, if I had had the financial wherewithal to support myself, as Grace evidently did, I like to believe I would have ended my first marriage at least 12 years earlier than I did. So I admit to a certain frustration that Grace persisted to endure his irrational abusive behaviors.

Whatever her passions, whatever her work, still, she has time for Ted. She must
make time for Ted, ensure he is the number one priority in her life. Whatever is
going on in Grace's life, and it is by no means as easy as it sounds, from the
outside, Grace's life looks perfect.
...she had learned to hide her secrets and shame well. (13)

Much of her life, she realizes, is spent cleaning up after Ted. Apologizing for
him, or charming those who have been snubbed. It has become a reflex, an
automatic response to his rudeness. She recognizes dismay, or shock, and sweeps in
to make it all better. (35)

I always wonder just how many people are in similar situations. I believe many many more than we might easily imagine!

All he had to do was bellow her name--no time, no patience for emails, or texts--and
Ellen would appear, framed in the doorway, notebook and pen always in hand,
ready to do whatever Ted wanted...
She headed off his moods before he had a chance to take them out on anyone
else; on Grace. She masked how temperamental he had become. (17)

Without an assistant like Ellen to constantly care for and appease Ted, Grace's life was unbearable. I could understand her frustration and impatience, but one of the practical lessons to be learned from reading this book was: you MUST ALWAYS diligently check all references before hiring a person. In her haste to improve her own daily life, Grace was far too hasty in hiring Beth.

"But you got references on her?"
"I couldn't get hold of anyone by phone, the numbers were out of service, but she
gave me their email and the references were glowing. Of course, now I have to
wonder if she was behind it."
"A Gmail account?"
"Hotmail, I think."..."Same difference. I never thought...God, how utterly stupid
am I? It never occurred to me to question it at the time."

Grace totally disregarded her own niggling suspicions in order to have some peace in her personal life. The first time Beth talks to Ted:

"It's an honor to meet you,"..."I've been a reader of your work for years."
Interesting, notes Grace. She didn't say "fan." Everyone says "fan." What does it
mean that she said "reader"? It feels as if it was a word chosen deliberately, as if
she wanted to praise him and elevate herself at the same time. (39)

If only she had maintained her suspicious attitude toward Beth, perhaps she could have stopped her. Grace's was not an easy position, and I feel that most of us might well have done the same thing, though I hope I would have just dissolved the marriage unless Ted was willing to make genuine efforts to at least change into a bearable, if not respectful, life partner... So many times we want to "be nice" and think the best of others, but if you are inviting someone into your personal life and allowing them to manage much of your daily life (especially finances), you must be objective and as thorough as possible in getting to know this person first.

While it seems impossible to me that a con artist like Beth/Betsy/Liz is allowed to continue bilking people of all their money and destroying their lives, perhaps this is accurate as there are no written contracts of employment, and the victims have willingly allowed this person access to all their personal information. I keep reminding myself that I'm sure the overwhelming majority of such "personal assistants" are honest and trustworthy; that in real life such situations are rare. At least I hope so. Once she has made up her mind to hire Beth, pending reference checks:

What a relief not to have to mother her husband; for her husband needs not just a
wife, but someone to hold his hand, soothe his soul, keep him calm, and there is
only so much Grace is able to do. (42)

I resonated so well with Grace's desire to have her relationship with her mother approach something much closer to "normal" or even bearable, if not actually pleasurable or loving.

Though her mother had been diagnosed with bipolar disorder, as a daughter, I also never gave up hope that a respectful, kind, and caring person would be revealed to me in my mother's soul, particularly since she herself had never been officially diagnosed with any such disorder, there was hope, right?!?. :)

I could relate to the immense relief and "new life" feeling Grace had after her first therapy session, though unfortunately, this psychiatrist was intent on diagnosing and medicating her with multiple drugs. I had two visits with a therapist who informed me that unless I could be diagnosed and placed on medication within the first six months, I would not be able to continue as her patient. Needless to say, that was my last session with her. I hadn't gotten much out of either session anyway. In fact, she talked about herself for at least half of both sessions! After all, my intention was NOT to serve as her therapist! :)

Have you read this book yet? You will need to do so to learn who Marissa and Jack are... :) Have you read any other of Green's books? What did you think? I would definitely recommend this one--I resonated with it much more than I thought I might. YAY!!
Posted by Lynn @ Smoke & Mirrors at 10:05 AM