The worst of the worst launder more than just money!?!

Al Capone Does My Shirts: A Novel
by Gennifer Choldenko 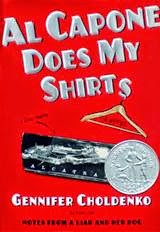 I just needed a break from the adult book world and what better distraction than children's literature? Admittedly, this is one of the very few books to which I was mainly attracted by the title. I just had to see what it was all about! Was I ever pleasantly surprised! This is so much more than a "kids" book! (As is so often the case!) :)

I have loved all the Newbery Medal and Newbery Honor books I've read, and this Honor book was no exception! I guess I had never really considered the total setup with a community like that on Alcatraz. Firstly, of course, the geographic location of an island forces isolation to themselves upon everyone living there. Secondly, I would have never considered that perhaps Alcatraz Island was a much safer and more secure environment than that of San Francisco just across the bay. Thirdly, we must remember the time, it was the depression--there were few jobs and so very many people were unemployed. At this time in US history, most females did not work outside the home, so it was mostly males competing for jobs and they were extremely scarce...

Moose introduces us to his world on page 3:
The convicts we have are the kind other prisons don't want. I never knew prisons
could be picky, but I guess they can. You get to Alcatraz by being the worst of the worst.
Unless you're me. I came here because my mother said I had to. (3)
Yes, Moose, that is typically what happens at age 12--we go where our parents tell us to go! Live with our parents, wherever that might be... :)

I peek out the front window of our new apartment and look up to see a little glass room
lit bright in the dark night. This is the dock guard tower, a popcorn stand on stilts where
somebody's dad sits with enough firepower to blow us all to smithereens. The only guns
on the island are up high in the towers or the catwalks, because one flick of the wrist and
a gun carried by a guard is a gun carried by a criminal. The keys to all the boats are
kept up there for the same reason. They even have a crapper in each tower so the
guards don't have to come down to take a leak. (4)
Yikes! That's some scary stuff! I don't think I would be thrilled with those living arrangements! But when you're 12 that's probably exciting, especially to your peers not living there!

Moose's dad explains the laundry system on Alcatraz:
We don't put the laundry out until Wednesday. Comes back Monday.
"Mom doesn't have to do it?"
He shakes his head. "The convicts do the washing here."
"The convicts wash my shirts, as in murderer convicts and kidnapper convicts, and
then I'm supposed to wear them?"
He laughs. (34)
This knowledge proves to come in handy for Moose, Piper, and some of the other kids living on Alcatraz. Though what can seem good in the beginning...well...you know...

We soon learn that Moose's sister, Natalie, has some not-so-normal behaviors and habits.
And...
Sometimes Nat's tantrums go on and on for days and nothing makes them stop. It's
impossible to know what will set her off. (9)
I immediately feel for Natalie's whole family, but particularly Moose. I always think life is much harder for the more "normal"/socially acceptable sibling(s). :( This is one of my favorite parts of this series. Natalie's challenges feel so real and are depicted so realistically, so I was not at all surprised to learn that Choldenko's real-life sister deals with the symptoms of autism. No wonder she can depict Natalie so accurately! And sweetly! And so smart is so many ways! Natalie was definitely my favorite character. And who could resist her frequent proclamation, "Natalie Flanagan's whole family." :)
Natalie's age is always ten. Every year my mom has a party for her and she turns ten
again. My mom started counting Nat's age this screwy way a long time ago. It was just
easier to have her younger than me. Then my mother could be happy for each new thing
I did, without it being another thing Natalie couldn't do. (12)
I can understand this coping mechanism on his mom's part.

Then enter Theresa Mattaman, "little Eleanor Roosevelt," who is trying to push her way into their apartment, and "Natalie-the-screamer" on the other side of the door, inside the apartment. As Moose thinks, "What they say about females being the weaker sex is the biggest lie in the world." :)

Moose describes himself:
I don't like getting in trouble. I was born responsible. It's a curse. (16)
However, I wonder how much of that is inborn for Moose and how much is the result of constantly being held responsible for Natalie's well-being and behavior. That would be a lot of pressure for a child!

Natalie turns all the way around and looks me straight in the eye in that weird way she
has of suddenly being present after weeks of being somewhere else. (23)
Moose begins wondering whether Natalie may realize this is the first day she will go to school, for although they've built up the Esther P. Marinoff,
"...somehow in all this talking, we ignored the major thing.
You don't come home from the Esther P. Marinoff. Every morning when the sun comes
up, that's where Natalie will be. (23)
Ooohhh, poor Natalie. Her parents don't tell her the truth that this is a "residential" school and she won't be returning home every night, fearing (rightfully so) it will upset her immeasurably, and yet, she is NOT stupid, she can sense the mood...

Moose mistakenly assumed Natalie was interested in history since she had loved it when he read to her from a history book,
But it didn't take long to realize it wasn't history Natalie was interested in. It's the
indexes she loves. Any subject will do. (26)
Sometimes is seems easier to be Natalie. People force her to do stuff. I have to force
myself. (42)
However, Natalie only lasts one day at Esther P. Marinoff, and since his Dad must work, Moose accompanies his mother to pick her up.
Here we go again... Before the Esther P. Marinoff, the Barriman School was "It" and
before that the heat treatments and before that the aluminum formula before that UCLA.
At UCLA they made us cut Natalie's hair. Shaved it right off. They tested her like she
was some kind of insect. (65)
I remember my grandmother desperately searching for treatment for my aunt who suffered from paranoid schizophrenia. It is desperation that you feel, particularly back in the early 1960's when there was basically NOTHING available, so I can only imagine in the 1930's!!

And wouldn't you like to be baby Rocky, who can rightfully claim (when he's older, of course!) that Al Capone's mother once rocked you and stopped your crying as an infant? :) So the kids' ruse to meet Al Capone's mother while on the boat to Alcatraz did work, however, Mrs. Capone never did see her own son, as she was so traumatized by the strip search which revealed nothing more than the metal stays in her old-fashioned corset had set off the metal detector. She refused to stay on the island.
I can't get over this. I keep thinking about when Al Capone was a baby. I'll bet his
mama sang him the same song she sang to Rocky. I'll bet she held his hand when they
crossed the street, packed his lunch for school, and sewed his name in his jacket--A.
Capone so everyone would know it was his.
I'll bet she wishes she could do it all over again too...if only Al were little and she could.
(134)
Ah, yes, some of these criminals might have had just such a "normal" upbringing...

Moose uncharacteristically leaves Natalie unattended for a period of time while he looks for "convict" baseballs that may have gone over the wall from the inside. When he returns,
"Hey, Nat, everything okay here? You just been playing your game, right?"
"105," she says.
"105?" I ask. (141)
Though at the time Moose believes she is talking about the numbers of rocks with which she is playing or the number of birds she has counted, he doesn't realize until near the end of the book just what this number truly means to Natalie.

Then Moose asks his father the one question I'm sure most siblings of "different" children ask eventually,
"Did I cause Natalie to be the way she is?" The question seems to come from
somewhere deep inside of me.
"Moose?" My father freezes, his eyes riveted on me.
"Something I did? You said she got worse when she was three. That's when I was
born. Was it me?" I concentrate on the rug.
"Moose." My dad grabs my shoulders and he looks straight into my eyes. "I don't
know," he says, taking a teary breath, "what caused Natalie to be sick. I don't think
anyone knows that. But I do know this." He bites his lip, his voice so full of feeling, he's
having trouble speaking. "Absolutely...absolutely for sure it had nothing, nothing at all to
do with you. (173)


These characters are so real.
Choldenko does a great job of delineating the children and their inter-relationships,
as well as the adults on the island.
She includes a summary of her research and what was factual and what she fictionalized.
I think children would enjoy this book. I certainly did.
So much so, that I read the next two in the series!
Does it sound interesting? Imaginative?
Posted by Lynn @ Smoke & Mirrors at 9:46 PM