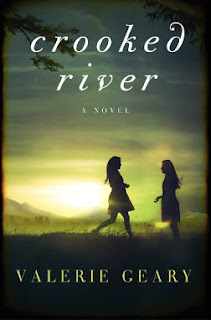 Win a free signed copy!! Simply comment and include your email address here! :) You have until Monday, September 7th at 7PM!

As I finished reading this debut novel I was reminded of two other debut mystery/thrillers: Tana French's In the Woods and Heather Gudenkauf's The Weight of Silence. High praise from me, since these are two of my favorite writers! The similarity to Gudenkauf's book may well stem from the fact that like Calli, Ollie is also mute. The resemblance to Tana French is in the fact that Geary can create the environment/atmosphere in which to couch the whole story--that virtually becomes a character in and of itself! Difficult to believe this was a debut novel, it was, in my opinion, so excellently written!

Fifteen-year-old Sam and her 10-year-old sister, Ollie, discover a dead woman floating in the river and although neither of them recognizes her:
Still, she was somebody's somebody and we couldn't just leave her.
We should do something. Shouldn't we? Tell someone? And then again, because I couldn't remember if I said it out loud the first time, "We should do something." (3)
And this rather sets the tone for this story--nobody seems to do anything when they should to avoid the virtually inevitable suspicion and ultimate arrest of their father, Bear. For the past 8 years Bear had lived in Zeb's pasture,
"...he hadn't changed much. He put up a teepee and planted a vegetable garden, dug a fire pit and an outhouse, and brought in a picnic table, and of course there were the hives. But there was no electricity, only the sun. No plumbing, only the river and a barrel to catch the rain. No roof over our heads to blot out the stars, no television to drown out the bird and cricket songs, no asphalt to burn the soles of our feet. Most kids would probably hate a place like this, but to me it was home. (4)

His landlord, Zeb, and his wife, were actually more parents to Bear (whose parents had died before his children were born) and grandparents to his daughters, than his wife's parents who visited once a year and sent $20 checks on the girls' birthdays. Their mother dies and they go to live with Bear,
But this was only a trial period. We have six months to prove the meadow was safe and Bear was a good father. Six months to convince her we could thrive here. Three days in, we weren't off to a very good start. (6)
True. It would freak most parents out nowadays if children were allowed to play off by themselves at a river and discovered a dead body! Probably not the best of starts, and may well explain their reticence to report it to the proper authorities. With other evidence accumulated that incriminated Bear, even Sam began wondering if perhaps she didn't know her father very well, or at least not well enough to feel secure in the knowledge that he could never have committed this crime...she had some doubt of his innocence initially, reminding me of Finding Jake by Bryan Reardon (Another one of my favorite reads that I really must review on this blog! Soon!).

After Zeb and Bear have moved the bee hives to better pollen sources, Sam wonders why they don't try to "fly back home," but her Dad explains,
"Their hive is their home....Wherever the queen is, that's where they return."
"But what if the queen's not there?"
"The colony falls apart." (7)

Could be a bit of symbolism or foreshadowing? Without its mother/wife/'queen bee,' their family...could also...

Ollie has one book that she's been reading since the beginning of the summer, Alice in Wonderland. She and her mother had been reading together in it every night, but had managed to only get halfway through... It is, however, this book that ultimately saves her!

Ollie immediately senses that Travis is bad.
I do not like this in-between boy, this almost man.
He's not who you think he is.
He's not your friend.
We can't trust him.
He'll hurt us.
Tell him to go away. (80)
She knew... I believe Ollie had what many of us may call a "sixth sense" about people.


Sam is rather a loner,
Bear and I both thought trees made better friends than people did. (16)
There are times I would agree! ;)

Sam talks to Bear:
I clamped my teeth down hard, biting back all the words I wanted to scream at him, all the ways he'd failed us....All the explanations and apologies in the world couldn't change what had happened. We carry our pasts with us, no matter how hard we fight to break free. He knew it, Mom knew it. I knew it now, too. I took a deep breath, and then another. I came here for the truth, and that's what Bear was giving me--take it or leave it. (216)

The epitaph on their mother's grave,
Beloved Daughter and Mother. As if that was all that counted. As if an entire person was made up of only two parts.
She was other things, too. Stargazer, storyteller, bibliophile, chocoholic and something of a weekend wino, gardener, collector of roosters and spoons and oddly shaped rocks, a good hugger, a better back-scratcher, a terrible cook, loyal, passionate, ever the eternal optimist, wife. A loving wife. Despite how it may have looked to people on the outside,...Mom had never stopped loving Bear. And he had never stopped loving her. (238-239)


"Your sister needs you right now."
Funny, I always thought I was the one who needed her.
I guess it comes down to this: Sam and me, we need each other. (314)

These two sisters bravely fight to prove their father's innocence, but what they find is incriminating. Is he innocent? If this sounds as intriguing to you as it did to me, I would highly recommend it! A fantastic debut and mystery!

A note: Valerie graciously agreed to an author interview and even gave a free book to one of the lucky readers and commenters! How nice is that?!? I received this book through a Goodreads giveaway and felt grateful that as a result of my review posting, another reader would also receive a free copy! Wow... :)
Posted by Lynn @ Smoke & Mirrors at 9:01 PM