Come Along on the Green Gables Read-Along!! We meet all the kids!! 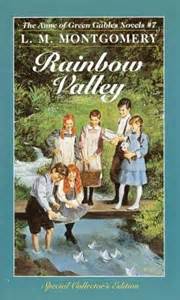 Getting to know the Ingleside and manse kids is quite the pleasure!  These two groups of children meshed immediately:
The race of Joseph recognized its own. (26)
As an only child who was fairly isolated on a 180-acre farm in the rural midwestern U.S., I cannot imagine having so many other children to interact with all the time! What fun! Little did Susan realize that the "uninteresting" and "immaterial" lead article about the assassination of "some Archduke Ferdinand or other" at a place "bearing the weird name of Sarajevo" would impact all their lives greatly in the future! And of course, for me, one of the most fascinating inhabitants of Ingleside is Dr.-Jekyll-and-Mr.-Hyde or "Doc" as the large fluffy orange cat is known! As Dr. Blythe/Gilbert noted
"The only thing I envy a cat is it's purr....It is the most contented sound in the world." (3)
I don't know...as I watch my five fur-babies, I'm pretty jealous of their nice home with lots of love and plenty of food, water, and toys! And their naps! They have the luxury of so many naps!! :)

Gilbert and Anne have just returned from a three-month sojourn overseas. Anne is anxiously awaiting Miss Cornelia's arrival so she can hear about "everything" that has happened to everyone in the past three months. Anne confesses,
"Do you know, Susan, I have a dreadful suspicion that I love gossip."
"Well of course, Mrs Dr. Dear," admitted Susan, "every proper woman likes to hear the news."   (3)
I can't imagine having left my children for three whole months! However, if you were going to travel back then it had to be by ship over water, and that takes a long time. In discussing the Methodist vs. Presbyterian ministers,
Miss Cornelia's scorn of men had abated somewhat since her marriage, but her scorn of Methodists remained untinged of charity. (10)

Jem, Anne and Gilbert's oldest, was "the child of the House of Dreams," all the others had been born at Ingleside.
He was and always had been a study, reliable little chap. He never broke a promise. He was not a great talker. His teachers did not think him brilliant, but he was a good, all-round student. He never took things on faith; he always liked to investigate the truth of a statement for himself. (16)

Next oldest was Walter Blythe, a poet if ever there was one. He was a "'hop out of kin, as far as looks went. He did not resemble any known relative." He had inherited his mother's "vivid imagination and passionate love of beauty" and read poetry from the time he first started reading. Kids at school thought him "girly" and "milk-soppish" since he was always in out-of-the-way locations reading...while other boys were fighting or playing sports. However, the one time he did choose to fight (to defend his mother's and Faith's honor) he won quite handily!
With Walter food for the soul always took first place. (19)
Rev. John Meredith and he "had taken to each other and had talked unreservedly."
Mr. Meredith found his way into some sealed and sacred chambers of the lad's soul wherein not even Di had ever looked. (86)
Philosophers and thinkers, both of them. 'Birds of a feather...' Though Mr. Meredith did eventually meet someone and romance blossomed, at least for a while...

The 10-year-old female twins were far from identical in looks. Anne, always called Nan, was very pretty--a "dainty little maiden." Diana, known as Di, had her mother's eyes and red hair. She was Gilbert's favorite and she and Walter were very close--"she kept all his secrets, even from Nan, and told him all hers." And then there's Mary Vance who inevitably 'stirs the pot' almost every time she opens her mouth! Oh, I would have loved to catch her at it just once! She was so mean!

The children of the manse were allowed to run quite wild, as they were left alone much of the time. Rev. John Knox Meredith was an "absent-minded, indulgent man" who lived in a world of books and abstractions," and his Aunt Martha was a rather poor housekeeper who didn't seem to pay much attention to her nieces and nephews. Meredith's wife had died and he was left to raise their children. However, the Glen St. Mary manse was "very homelike and lovable,"  There was an atmosphere of laughter and comradeship about it; the doors were always open; and inner and outer worlds joined hands. Love was the only law..." (20)
The eldest, Jerry had his father's black hair and large black eyes that were flashing rather than dreamy like his father's. Next in line was Faith, who "wore her beauty like a rose, careless and glowing."
She laughed too much to please her father's congregation and had shocked old Mrs. Taylor, the disconsolate spouse of several departed husbands, by saucily declaring--in the church-porch at that--"The world isn't a vale of tears, Mrs. Taylor. It's a world of laughter." (22)
Ah, yes, back then truly pious people were to be sedate and quiet-mannered, or what I would consider to be dull and boring! :) Though she was none of those when she confronted Norman Douglas, convincing him to attend church AND contribute handsomely to her father's salary! No one could know how that might impact both Ellen and Rosemary West's futures!

Next came dreamy Una who was not given to laughter. She was quite serious with her "braids of straight, dead-black hair" and "almond-shaped, dark-blue eyes, caring much more than Faith about others' opinions of her and her family. Carl had the "clear, bright, dark-blue eyes, fearless and direct, of his dead mother, and her brown hair with its glints of gold." Carl knew all about insects and critters, sometimes taking them to bed with him and definitely carrying them in his pockets. I so admired these children for not only creating, but maintaining and enforcing decisions of the Good Conduct Club. How sweet... Of course, until little Carl contracted pneumonia as a result of one of his self-imposed punishments! And of Rilla it was said that her "sole aspiration seems to be to have a good time." Ah...but just wait! :) People can surprise you!

I could relate to the children catching trout and then cooking them outside over an open fire. My sons had built a makeshift shelter in a copse of pine trees by our house and dug a fire pit over which they placed an old grate from a 'dead' grill. They would take my iron skillets out and cook eggs and bacon and even make toast! They had a blast doing that with their friends! Ever so many scandals and excursions amongst these "race of Joseph" children: riding pigs, playing in graveyards, telling ghost stories... Perhaps the biggest scandal of all was when the manse children (sans Carl who was sick) cleaned the house...on a SUNDAY!! Oh, horrors! ;) Miss Cornelia was quite upset about these activities, but Anne defended them,
"...they're only little children. And you know they've never yet done anything bad--they're just heedless and impulsive--as I was myself once. They'll grow sedate and sober--as I've done."
Miss Cornelia laughed, too.
"There are times, Anne dearie, when I know by your eyes that your soberness is put on like a garment and you're really aching to do something wild and young again. Well, I feel encouraged. Somehow, a talk with you always does have that effect on me." (83-84)
Aha! Anne may not be as grown up as she'd like to let on! However, she is very mature in her handling of people...her interpersonal skills are well developed! Of course, as much as she talked as a child, she certainly got a lot of practice interacting with others!

Really, I am sad that this Green Gables Read-Along is close to finished! I have adored all these books and though this review is almost 3 weeks late, I had read this book and the last one in the series a couple of weeks ago. Just too darned busy to get reviews posted! But here ya go! I hope my review helps you know this book a bit or even brings some memories if you've read it... I love Montgomery's writing!
Posted by Lynn @ Smoke & Mirrors at 9:12 PM