One of my favorite reads in a long time! Quirky and fun!!

The Rosie Project by Graeme Simsion 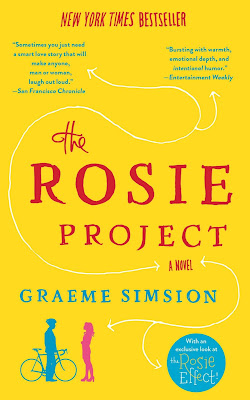 I love this book! For me, it was in some ways reminiscent of The Curious Incident of the Dog in the Night-Time by Mark Haddon and The Kitchen Daughter by Jael McHenry, and perhaps to a lesser degree, Love Anthony by Lisa Genova. I suppose the main similarity to these books is the fact that the protagonist exhibits certain symptoms of autism/Asperger's Syndrome. However, I believe Simsion has hit on a formula that may appear more pertinent to many adult readers. Firstly, it centers on the themes of adult relationships and romance, which typically resonates with most adults' trials and tribulations in said areas. Secondly, there is much humor, both subtle and overt, interspersed throughout this book--I was definitely laughing out loud many times as I read it! Thirdly, there were secondary themes of monogamy/'open marriage', paternity, parent-child relationships, and professional ethics/morality. This probably makes the book appear much more complex than it really is. (I just love to parse out themes!) But have no fear--I found it to be extremely readable AND enjoyable! I was a bit surprised that all three of the other book club members who read this by the time we met were in agreement that it took a while for them to get into the story. Not so for me! I loved it from the first word on. :) All three of them really liked it and it did provoke great discussion.

There are so very many episodes/situations I would LOVE to quote to you verbatim, but I will attempt to pull only those which tickled me the most! (Trust me--there are MANY!!) Upon considering his best friend's (one of only two friends at that time) request to present a lecture in his stead, Don Tillman considers:
"...on the designated evening I had scheduled ninety-four minutes to clean my bathroom." (1)
Yep! That was within the 6th sentence of this book. A dead give-away! :) My first thought--Can we say "OCD"? :) Plus, I'm sorry, but did he literally scrub every square inch of that bathroom with a toothbrush? The only time I spent that much time "cleaning a bathroom" was when I had to contend with the rust stains created by iron-rich well water, requiring much scrubbing! Don proceeds to outline his three options:
1. Cleaning the bathroom after the lecture, resulting in loss of sleep with a consequent
reduction in mental and physical performance.
2. Rescheduling the cleaning until the following Tuesday, resulting in an eight-day period of
compromised bathroom hygiene and consequent risk of disease.
3. Refusing to deliver the lecture, resulting in damage to my friendship with Gene. (1-2)
So...I don't know about you, but these specific thoughts would probably never enter my mind, for many different reasons. However, in some ways I admire someone who can be so thoroughly regimented and rational. Wow...
I presented the dilemma to Gene, who, as usual, had an alternative solution.
"Don, I'll pay for someone to clean your bathroom."
...This was an excellent outcome, and an illustration of Gene's ability to find solutions to social problems. (2)
In my opinion, it also proved Gene had excess disposable income, and, was probably a very self-serving egotistical man, willing to do whatever it takes to get his way... Though obviously, he has served as a true friend to Don, a person with whom most people have found it impossible to spend much time, let alone someone with whom to comfortably initiate and maintain a friendship. Personal note: I tend to be drawn to those who appear to be judged by the overall majority as 'socially different.' Perhaps mainly due to the fact that as a young child I was ostracized by many others due to environmental and social circumstances beyond my control--I can just relax and accept/appreciate more 'variability' in social skills and behaviors than most other people.

Two lunchtimes were sufficient to research and prepare my lecture on Asperger's syndrome, without sacrificing nourishment, thanks to the provision of Wi-Fi in the medical library café. I had no previous knowledge of autism spectrum disorders, as they were outside my specialty. The subject was fascinating. It seemed appropriate to focus on the genetic aspects of the syndrome, which might be unfamiliar to my audience. Most diseases have some basis in our DNA, though in many cases we have yet to discover it. My own work focuses on genetic predisposition to cirrhosis of the liver. Much of my working time is devoted to getting mice drunk. (6)
Ha! Simsion does such an excellent job of interspersing humor throughout this book!

As Don explains in his lecture:
"Asperger's isn't a fault. It's a variant. It's potentially a major advantage. Asperger's syndrome is associated with organization, focus, innovative thinking, and rational detachment."
A woman at the rear of the room raised her hand. I was focused on the argument now and made a minor social error, which I quickly corrected.
"The fat woman--overweight woman--at the back?" (10)
Again--humor used in the course of making a point!! :)
At different times during his lecture, the students were chanting, "Shoot the baby!" and "Aspies Rule!" At the close of the lecture Don notes to himself:
The parents made no constructive suggestions; some even tried to suppress their children's creativity.
I raised my hands. "Time's up. Excellent work. All the rational solutions came from the aspies. Everyone else was incapacitated by emotion." (11)
And Don was absolutely correct, however, some would note that there were ethical and moral dilemmas associated with his proposed scenario as well... :)
Later, Claudia asked if Don had enjoyed the Asperger's lecture.
I...told her I had found the subject fascinating.
"Did the symptoms remind you of anyone?" she asked.
They certainly did. They were an almost perfect description of Laszlo Hevesi in the Physics Department. (21)
It should have hit a bit closer to home than that, I would think! ;) I gathered that Gene and Claudia had planned for Don to give this lecture as an introduction to discussing his own personality characteristics.

I loved Don's ability to not only accept but appreciate Daphne's qualities and particularly her enthusiasm to learn and his enthusiasm to teach her. He was able to continue accepting and interacting with her in a way that made her happy long after most people would have done so, and I appreciated his patience and dedication to her and their relationship. This demonstrated his loyalty. As with Asperger's, there aren't many who can tolerate and continue to interact with Alzheimer's sufferers.

As demonstrated throughout this book, Don's thought processes are NOT 'typical' (or 'normal,' if you prefer or still use that word) and provide a seemingly aberrant alternative to the usual... There were times when Rosie could be just as inappropriate:
"...I'm not proficient at dating. There are so many rules to remember."
"You're doing okay," she sad. "Except for staring at my boobs." (61)
Ha! Caught! However, upon questioning, he can describe the pendant she is wearing in detail, as well as the one from earlier in the day, so he was able to justify his excuse of looking at her pendant(s). :)

Perhaps Don himself summed it up best:
Ultimately, the entire father problem was caused by Gene. He almost certainly taught the medical students an oversimplified model of the inheritance of common traits. If Rosie's mother had known that eye color is not a reliable indicator of paternity and organized a DNA test to confirm her suspicions, there would have been no Father Project, no Great Cocktail Night, no New York Adventure, no Reform Don Project--and no Rosie Project. Had it not been for this unscheduled series of events,...I would still be eating lobster every Tuesday night.
Incredible. (292)
Proof that without some spontaneous unexpected life events our lives would prove to be very dull and boring! 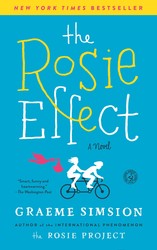 I admit I was very curious about all the hype I had read regarding this book. I strongly advise you to pick this one up and read it, if you haven't already! And if you have, what struck you most about this book?

There was so much to consider and contemplate...while it sounds rather complex, it was quite simply written and very easily understood. And I loved each of these characters!

Definitely anxious to read the sequel, The Rosie Effect!