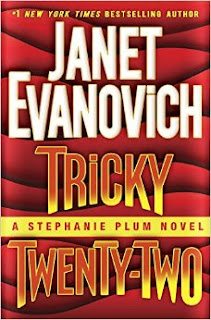 Tricky Twenty-Two
by Janet Evanovich
I found this book to be a bit different from the norm for a Stephanie Plum installment.
Although it was a very enjoyable read, I felt it was a bit more serious and less hilarity all the time!
That wasn't a bad thing...it just had a bit different feel!

Stephanie asks Morelli,
"How did you happen to turn up here?"
"Dumb luck. I had dinner with Anthony, and I was on my way home when I saw Lula's Firebird parked half a block from a disaster scene. I thought chances were good you'd be involved." (p 8)
He does know her well, doesn't he? :)

And Lula definitely has her own unique 'fashion sense':
Lula was wearing ankle boots with studs and five-inch spike heels, a black spandex skirt that barely covered her butt, a poison green tank top that was stretched to its limit over her big boobs, and a sparkly, fluffy, pink angora cardigan. Every time she moved, some of the angora floated off the sweater and swirled in the air. (p 15)
Even if I was still young, I can't imagine I would ever dress like Lula does! However, that is definitely part of her 'charm'! :)
Of one perp Lula states,
"It says here this moron attached the dean of students. I imagine this cut his college career short. I'm no college graduate, but I know you're not supposed to try to kill the dean of students." (p 16)

Stephanie and Lula discussing the fact that Lula is "the worst shot on the planet..."."
"Boy, that's hurtful. As it happens I have an eyesight problem."
"I didn't know that. What wrong with your vision?"
"I can't see real good."
"What about glasses?"
"I got them but they ruin my appearance."
"Are you supposed to wear them when you drive?"
"Only if I want to see things like signs. I can see big things like cars."
"Good grief. Put your glasses on."
Lula searched through her purse, found her glasses, and put them on. They were shocking pink and oversized with rhinestones embedded in the frame. She looked like a black Elton John. (p 183-184)
I felt Janet was dating herself a bit on this one! I remember Elton John's get-ups quite well since that was my young era! I quite remember a concert of his in Indianapolis when I was 20. He was amazing! Of course, I was a bit 'impaired' from overcelebrating by the concert's end, but really, he is quite a showman!

Morelli is sick and considering quitting the police force...what?!? Really?!? Yep...and...he's made some changes in his personal life!
...Morelli had always seemed invincible to me. He waded through crap every day and it all washed off in the shower. Even as a kid he was constantly getting into trouble and landing on his feet. He broke his leg and he was fine. He was shot and he was fine. Never defeated. And now he was the victim of cramping and diarrhea and he wasn't sounding good. It was so atypical for Morelli that it was hard for me to wrap my head around it. (p 208)
See what I mean about this book seeming a bit more serious?

As the creepy guy is explaining to Stephanie...
"Healthcare is just another way of allowing employers and the government to control you. What's the first thing they do when you step into a doctor's office? The take your clothes. It's a power grab. A naked man has no power."
Clearly he doesn't know Ranger.  (p 212)
Mmmmm...Ha! I bet that's so, Stephanie! We do get quite a bit of Ranger in this book!

I must admit that when Mintner supposedly just hands over a copy of a student's schedule along with home address, etc., that really could never happen because of FERPA. I can't imagine a bounty hunter commands the same authority as the police...but maybe they do. :) Though Mintner was his own kinda creepy, too! Not as if he was overly concerned with following the law!

And guess who tackles the main creep in the end? Stephanie? Nope... Lula? Nope... I almost stood up and cheered!

Did anyone else feel this one was a bit different from the other 21 preceding books?
I really liked it, but didn't feel it was as laugh-out-loud funny.
Posted by Lynn @ Smoke & Mirrors at 9:54 PM