Jam on the Vine by
Lashonda Katrice Barnett
One of the best historical fiction novels I've read!
In case you missed it, here is the first part of my review!
(Yes, there was so much I felt needed to be said, there are two postings for this review!)
This is an amazing story of brave people, but especially brave young black females at a time when prejudice and discrimination were not only overlooked, but actually condoned.
I find it unbelievable that this is Ms. Barnett's first novel!
I predict Ms. Barnett has a great future ahead as a writer!
And I love love love this cover image! 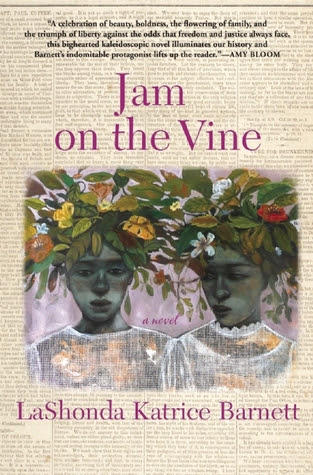 This book encompasses so very much that discussion could be endless! There were about 12 people at the University Book Club meeting when this was discussed, and all said without exception that this book introduced them to at least one new historical fact of which they were totally unaware... That is amazing, considering the diversity among this group! It speaks to the tenacity of Barnett's comprehensive and thorough research and broad coverage of the time.

For me--I had no idea of 'the Red Summer of 1919,' during which there was an outbreak of lynchings and race riots across the Midwest. Born and raised in the Midwest and had never heard of this in my nearly 60 years of life. Sad. Exactly what are we teaching and learning of our own history? We should know about such things so we can make sure it is never repeated! We cannot be aware if we are uninformed!

Ivoe is luckier than most young black females--able to attend Willetson Collegiate and Normal Institute in Austin. Advice from her family as she prepares to embark upon this adventure... Her older brother, Timbo, tells her of something he observed on a Florida beach years ago:
"You can't see the end lessen you cut it down. The sun can't wither it, fire can't burn it, and moss can't cling to it. When a strong wind come, it just bends--lays all its fans out till the wind lets up. You remind me of that cabbage palm, Ivoe. You might have to bend a little, but you ain't never gonna break." That's how it was with Timbo. Lord knows he could act foolish and ornery, but whenever her brother said she could do something, she believed him. (82)
My immediate thought was that Timbo was a bit of a writer himself!
Momma waited by the tracks at the train depot, a bunch of yellow primroses in her hand. "Probably wilt on the train in all this heat. You be in my thoughts much longer." She hugged her tight and whispered, "Baby you going places I didn't have sense enough to dream about." (83)
All I could think of in regard to Lemon's comment was that at least this next generation, her own children, had that chance to dream...whereas Lemon's generation had as its main goal nothing more or less than survival...and not just in can economic, self-supporting sense...

In Berdis Peets Ivoe recognized the flare of heroines she had met in her literary solitude....Passion for music gave Berdis an original life. In this way, she reminded Ivoe of all the women she loved--her mother, Aunt May-Belle, Miss Stokes--each had certain talent that seemed to dictate her womanhood. (88)
At a school convocation where Berdis was to play a Schumann composition, she substituted "Mister Tom Turpin's 'Buffalo Rag'...
"I lost a week in the practice room on account of devising my own program, but it was worth it....I would know very little that our people have accomplished in the ways of music, poetry, literature, if I had not found it out for myself. I suppose Willetson is like every other institution for learning in America. Even when the teacher is colored, don't expect to be told anything worthwhile about yourself. Most teachers here are white and they love to hear about how great they are. Can't shut them up on talking about it neither, as if they made the world on their own. Makes my ass hurt....If you're not careful, they'll teach you to despise yourself. And you can't do nothing worthwhile unless you feel good about yourself." (87)
And, that, in my opinion, is exactly where our educational system overall fails many, if not most, students... And "makes my ass hurt"! Kills me! So perfect!
Berdis loved it when Ivoe laughed all deep down in herself. "What's got you so tickled?"
"Momma always told me not to show no man all my teeth. She said you can't smile at them too wide 'cause then they know they got you. She didn't say nothing about showing my teeth to a woman."
Berdis pulled Ivoe close enough to kiss. "I got you?" she said, too serious.
"Yeah. You got me." (97)
Though unfortunately, this relationship didn't stand the test of time...and Berdis became bitter...with disastrous results.

Writing did not come easily to Ivoe...
How vast the gulf between consuming words and making them! Reading had always enlivened Ivoe but writing was death. Where she had cherished books for their company, writing was a lonely endeavor she was not suited for. Her first contributions to the Herald were written in her habitual passive voice. "On the way to progress, we make self-discoveries," Miss Durden encouraged. For Ivoe, the blank page was a looking glass. In writing she came face-to-face with her truest self. She could speak her mind without worrying about who it offended. She was a gardener like her mother, planting seed for thought in a reader's mind. Like Papa she forged the right word on the anvil of her mind." (94)
Ms. Barnett's writing...well, simply wonderful! While at dinner at Miss Durden's, Ivoe asks...
"My articles...what begs improvement?"
"You're coming along." As usual, the teacher was sparing with compliments, having seen how they snuffed out potential greatness. "You know, a sentence is like a race. You can't possibly win it unless you end as strong as you began. Good journalists understand that the last word is as important as the first." (103)
I was one of the few book club members for whom this rang so true...an encouraging teacher trying to avoid creating complacency in her student. It was so very obvious to me that Miss Durden was attracted to Ivoe as more than just teacher-student...
Ivoe dallied at the open front door where the air was sweet like honeysuckle, and Miss Durden drew her into a tight embrace, touching the knot of her scarf in a way that prompted Ivoe to look her in the eye.
"Father up in heaven. It's what's inside that makes you shine, girl." (103)

Ivoe returns to Little Tunis an educated woman, with big plans for a journalistic career, but discovers there is still very little opportunity for her employment, and virtually none using her journalistic skills. Eventually, the family moves to the city, only to become disillusioned as were so many... Ivoe and Ova Durden, her former teacher, visit each other regularly throughout the ensuing years, and eventually become lovers and found Jam on the Vine, the first female-run African American newspaper, but their lives are by no means calm and complacent. Ivoe and her brother Timbo, Ova, and many others risk their lives to protest and bring voice to the oppressed during the 'Red Summer' of 1919 and beyond.

As Ivoe overhears two black women discussing Jam,
Ivoe recognized the brand of negritude on display. To her, theirs was the worst kind of race pride: it ended when complaining ceased yet did nothing to propel the race forward. They gave the white man and his evils over to Jesus and and prayed for things they themselves might remedy, while Jim Crow stood with his foot on their necks. (251)
Worse yet were the ones who loved to tell you how good God was while they made do with as little as one could imagine. Colored religion was the white man's most clever tactic yet. A new form of Uncle Tomming. It burned Ivoe up. Lord, woe is me--instead of pulling together and doing something to change the course of their lives... (123)
I had never before read such a condemnation of "Christianity" with regard to the oppressed, but for me, it certainly rang true--there is a point at which a person must help themselves or nothing will change. Are "good Christians" simply to believe that life is as it should be and there is no hope of social evolution for the better? When considered from Ivoe's perspective, it seems nothing more or less than a passive acceptance of injustice...a way to confirm and perpetuate oppression of the oppressed. But I digress...

Heart-stopping. There were times when I scrunched my eyes shut while reading the last third or so of this book. The suspense. Wondering if this would be the time one of these characters would be killed for their activism and fight for justice.
He doused her until the bottle was empty and she had accepted her fate. He would set a match to her, sweep up the remains or leave them to the mice....So this was the helplessness and regret Papa had also felt. (244)
And I always feel as if that sense of 'helplessness' is what defeats people most. In this time, kidnappings and killings were 'accepted' as part of the risk for protesters. And those perpetrating such acts? They could well be the very same 'public servants' paid to protect the citizenry! Admittedly, there is part of me that wonders just how far we have really come in preventing such happenings...

The Jam offices are closed by legal injunction and Ivoe is jailed. As the guard delivers food to her:
"Gonna get your people in a world of trouble," the grim-faced guard said to Ivoe upon delivery of a sandwich and glass of water.
"We have always lived in a world of trouble. Kindly take back your tray. I do not wish to attract vermin."  (286)
The next morning she looked out her cell window and drew a shuddering breath, stunned by what she saw. Across the street, a quiet mob crowded the sidewalk. She craned her neck to see how far the human chain extended--beyond the end of this block into the next. In the blustering cold, shoulder to shoulder, they began to sway to a minor cadence as their voices swelled with song.
Heavy load, heavy load,
Don't you know God's gonna lighten up your heavy load.
Heavy load, heavy load,
God's gonna lighten up your heavy load.
The language of grieving never had words; the human heart does not speak but sings its sorrow. Ivoe heard theirs now, a plaintive refrain sifting through her soul....Ona had felt something that Ivoe didn't or couldn't until now: community. Everybody's little bit of goodness pooled together to lift someone higher. (287-88)

For [Ivoe], life in France was kinder, but no matter where she was in the world, her race and her gender would work against her. (310)

She needed all the support she could get--names and addresses for every black politician in the country, from alderman to senator, on a clipboard within reach. They were up against a mighty bear, but each cell door flung open in the name of justice was an arrow in his tough skin. (316)

Here is a great NPR Interview with the author.
(I have mentioned my fascination with NPR before, right?) :)
If you haven't read this book yet, I highly recommend it!
An absolute favorite of mine--EVER!
Posted by Lynn @ Smoke & Mirrors at 6:10 PM