Emil and the Detectives--classic children's literature!

Emil and the Detectives by Erich Kästner
Illustrated by Walter Trier
What a delightful read! To think this was published in 1929!
I could find no acknowledgement of the translator, but you can read of the history of this book in the Wikipedia article devoted strictly to it.
This book was the only one of his pre-1945 books to escape the Nazi censors.
According to Wikipedia,
The most unusual aspect of the novel, compared to existing children's literature at the time,
was that it was realistically set in a contemporary Berlin peopled
with some fairly rough characters, not in a sanitized fantasy world;
also that it refrained from obvious moralizing, letting the characters' deeds speak for themselves.
I hadn't really put this into that historical context of children's literature,
but it truly is unique in these respects.
Amanda of Simpler Pastimes is hosting a Read-Along! Here is her review!

Emil's mother is a widow, working as a hairdresser from her home, to support herself and her young son, making enough to send him to school, but not much more than needed to cover living expenses and school fees. I love how Kästner depicts this as Emil and 'the Professor' get to know one another:
'By the way, is your mother very strict,' the boy from Berlin asked.
'My mother?' said Emil. 'Not at all. She lets me do everything.
But I don't want to do everything. Do you understand?'
'No,' the Professor declared, 'I don't understand.'
'No? Well, listen to me. Are you very rich?'
'I don't know. We don't talk about money much at home.'
'Then I think you must have plenty of money if you don't talk about it much.'
The Professor was thoughtful for a moment and then he said: 'That's very possible.'
'My mother and I talk about money often. Because we have so little.' (113-114)
The truth of this statement struck me. Money has always been a topic of discussion in my household, since there was never an abundance. (Though I have always had a roof over my head, plenty to eat, and clothing, for which I am grateful.) :) This is one of the reasons Emil is so motivated to earn the top grades in his class each term, and even when he has permission to stay out playing until after supper, he always arrives home early enough to eat with his mother because "being together is all my mother and I can afford to do." Awwww... Life is very different for the Professor who admits that even if he is home for supper, typically no one else is there as they are all out doing their own thing.
The Professor cleared his throat and said without looking at Emil:
'I suppose your mother and you love each other very much?'
'Yes, very, very much,' Emil answered. (115)
Awwww...and now I feel sorry for the Professor! 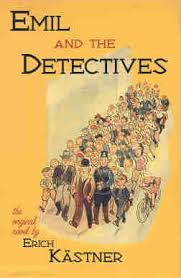 Emil's mother cannot afford to leave and go with Emil to visit her own sister and family in Berlin, but manages to save enough to send him over the holidays, stating: "He's big enough now to look after himself on the journey." Ah, but is he? Perhaps we really shouldn't take candy from strangers, as accepting an offer of chocolate from one of his traveling companions, Grundeis, meant Emil did not suspect this man of any ill intentions. All other passengers exit the car, leaving Emil and Grundeis to themselves. Though Emil's intention is to remain awake while on the train, he succumbs to sleep, awakening just in time to realize the seven pounds with which his mother entrusted him is gone from his pocket. He is panicky, realizing Grundeis must have stolen it while he slept, and frantically looking for the man, whom he sees disembarking from the train! He grabs his suitcase and the flowers for his Grandmother and runs to catch up, hoisting himself onto the same tram as Grundeis just in the nick of time. It is on this tram the boy makes a valuable connection with a very kind and generous person who pays his fare. It is as Emil is 'staking out' Grundeis while he eats at a restaurant that he meets 'motor-horn' boy, Gustav, who immediately becomes interested in helping Emil capture Grundeis. Gustav brings all his influence to bear and gathers about two dozen boys to help them.

It is amazing the organization these children establish in order to play 'detective' and keep Grundeis under surveillance that evening. And, Emile's cousin, Pony with the nickel-plated bicycle ends up joining in once Emil's note is delivered to her house where his grandmother lives. It was rather cute to see how the boys all doted on her! These children pooled what meager financial resources they had which allowed them to follow Grundeis to a hotel where he registered to spend the night. Then they enlisted the help of the lift-boy, with Gustav using a spare uniform to spy in the hotel, verifying his room number, etc. Knowing that Grundeis has a wake-up call scheduled for 8AM the next day, the boys all make plans to stalk him... By the time Grundeis is awake and looks out the window,
...he noticed how many children there were in the street below.
At least two dozen boys were playing football in the Square.
Another group of boys stood in Kleist Street.
And there were children at the entrance to the underground station.
'The schools must be having a holiday,' he grumbled with irritation... (124)
Hah! Little did he realize...just what awaited him and how much trouble they would cause. 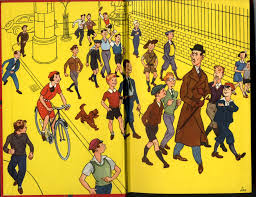 Emil is refunded the seven pounds by the Chief Criminal Investigator and finally arrives at his Grandmother's/Aunt's/Uncle's house, where Pony is wearing her mother's apron but "squeaks with delight" to see Emil:
'Careful. My hands are wet, I'm washing the dishes.
We poor longsuffering women with all our housework!' (168)
I did notice the sexism (Perhaps more satire than not?) in this scene as well as the fact that Emil's new 'friends' were all males, and though Pony brought them food and drink on the morning they awaited Grundeis' departure from the hotel, she was not allowed to be directly involved in the action. But...this was a totally different time and place...and probably a bit unusual for a girl to be given much of a role at all?

Once this thief's identity is verified, it turns out he was a wanted man and there was a reward for his capture, which is given to Emil! He is a hero! And that stranger on the tram who paid Emil's fare? Turns out he is a reporter and publishes a huge one-page article about the event with the headline:
SMALL BOY ACTS AS DETECTIVE
100 BERLIN CHILDREN CHASE CRIMINAL
Can you imagine Frau Tischbein's (his mother's) surprise when she spots this article that includes a picture of her own son while on the train to Berlin? She reads it 11 times during those hours!

Emil's Aunt bakes her famous apple cake and treats Emil's new friends to a party.
I loved the fact that Emil's Grandmother specifically cites little Tuesday's immense contribution to the cause by 'manning' the telephone in his house to pass along pertinent information in a timely manner and thereby missing out on the fun!

All's well that end's well, I guess!
As Emil's Grandmother, Mother, and Aunt all consider the lessons to be learned, Grandmother finally sums it all up:
'Money should always be sent by money order.' (192)

There is a sequel, Emil and the Three Twins, which was published in 1933.
Though my library system does not have a copy... The hunt is on for a copy! 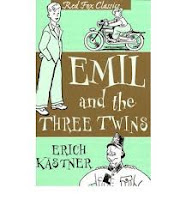 Have you read any of Kästner's books?
I probably would have never done so had it not been for finding
Amanda of Simpler Pastimes' Classic Children's Literature Event April 2016 and
Emil and the Detectives Read-Along!
So glad I did! This was a charming read!
Posted by Lynn @ Smoke & Mirrors at 5:27 PM