Blackout -- NOT Andy Carpenter, but just as good!

Blackout by David Rosenfelt
If you follow this blog at all, you should be well aware
that I love Rosenfelt's Andy Carpenter series.
Truly, I do!
However, when I discovered that he also publishes stand-alone mysteries,
I assumed I would also like those and wondered
if my husband might not also enjoy reading them.
I did. He does!
I checked this newest release out of the library and both of us enjoyed it very much!
Though I admit, I missed Tara greatly! (Andy's canine companion...) 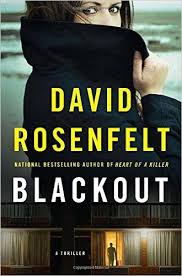 He had me with the first line, really...
Nate Alvarez wanted to screen the call. (1)
Really? Why? What's going on with this guy that he needs to know who is calling? Oh, wait! I do that all the freakin' time!
If your number isn't in my phone, I'll not answer.
Followed by the second and third sentences:
Actually, he wanted to throw the phone on the ground
and stomp on it until it stopped ringing permanently.
There were times in his life that he would have done exactly that,
but Nate was thirty-seven years old, and in recent months
there had been faint signs that he was starting to mature. (1)
Yup! There's that snarky self-deprecating humor
I love so much from the Andy Carpenter series!
Having read these first three sentences,
I knew this would be enjoyable! I was "in"!

Then we begin to get just a bit of information:
Doug was a loose cannon, always had been. Sometimes it helped him on the job, and sometimes it didn't. What it did was thrust Nate, his partner, into the role of seasoned, level-headed veteran.
It was not a role that Nate was particularly well suited for. (2)
This is what I love so much. By the top of the second page we have learned so much about these two men--about their personalities and their relationship as partners! Doug had "experienced a personal tragedy that shook him to his core" about six months prior to this. It was an incident that I don't believe anyone could have recovered from or dealt with quickly or completely...perhaps ever. Doug has been chasing Nick Bennett for many years, trying to nail him with...well...something...anything!
Bennett's appearance was particularly deceiving. He was fifty-three years old, graying,
tall and thin. He looked more like a refined patron of the arts than a person
who had clawed his way up the criminal ladder in northern New Jersey.
And ironically, he was in fact a patron of the arts,
as well as a contributor to many charitable causes. (19)
So immediately we know Nick is one of those guys who is virtually untouchable! This is our first 'bad guy' who is immediately linked to a second 'bad buy,' Ahmat Gharsi, who is currently living in the U.S., unbeknownst to the authorities.
So he was going to stay in New York City, and with perfect fake identification
and some minor cosmetic changes in his appearance, he would not be found by the authorities, whether or not they were looking for him.
Eventually they would learn that he was there.
After the fact. (24)
We are told that Gharsi is underestimating the threat that is Bennett.
Ahmat Gharsi would learn that Nicholas Bennett was a force to be reckoned with,
and one he would not be able to handle.
After the fact. (25)

Doug is found in a motel room with a severe head injury and is suffering from retrograde amnesia in the aftermath. He cannot remember anything that has happened within the past ten years. The prognosis? He may or may not remember anything. Only time will tell.
Waking up every morning I have the same sensation.
Things seem normal...I seem normal...and my first thought is that it isn't possible.
There's no way I could have lost ten years of my life.
I'm pretty pissed off about it. It's like I was in a coma all that time, as if I never lived
those years at all. I'm already realizing that life is all about memories;
it's the way we keep score. It doesn't matter if a tree makes a sound when it falls in the forest;
it only matters if anyone remembers it. (45)
I get that. It only seems 'normal' for someone to be angry about losing their memory. It is true that we do "keep score" through memories, isn't it? I'd never thought about it in that way, but I do agree. Without memories, you are basically screwed in many ways. Though Doug had been suspended from the police force, he is now "reinstated with full back pay." But Doug has no idea why he was suspended or what happened to him at that motel! He must ask the Captain his own rank! He was...is, a lieutenant! As you can imagine, that sets any investigation back mightily, when no one even knew where you were, let alone what you were doing and you have no clue either! Yikes!

Throughout this book, someone tries to kill Doug who becomes a hero when he stops an attack in a movie theater. Then he becomes persona non grata with his own force, Homeland Security, and basically any other law enforcement agency involved, when he receives a tip he believes to be valid and follows up on it with a fruitless stakeout and raid. Much money, time, and manpower wasted for no tangible result. And he has no further leads after that...and still just a teeny bit of memory, but nothing compelling or helpful in solving this case.

And though she helps, Jessie, is trying mightily to keep a certain distance from Doug, though that gives way before long. You see, not only is Jessie a fellow coworker, but she was once his fiance, until the tragedy six months ago when he broke up with her rather than allowing her to work through their combined grief together. Ouch! This is going to be tricky, as you might well imagine! The morning following their first 'reunion sex' as he prepares to leave, Doug says...

"Nate said if I ever hurt you again, he'll torture and kill me."
"He'll have to get in line." (172)
Alrighty then! At least he knows where he stands with this relationship! He had better 'do right by her,' as they say! Doug receives yet another tip and after sharing the information
with Jessie, decides this time, he will pursue a stakeout on his own time, by himself...until...

"I'm going with you," she says.
"You don't need to do that. I'm not going to be going in shooting. I'll strictly be an observer."
"Which part of 'I'm going with you' didn't you understand?"
This is one tough lady. Not only can't I fathom why I broke up with her,
I don't have any idea where I would have gotten the courage to do so.
"Let me ask you one question," I say. "In past situations like this,
when we disagreed on something, who would usually come out ahead?"
"I'm undefeated," she said.
"I'll pick you up at seven." (177)
Love it! :) As a feminist I guess I can especially appreciate this. Plus...it sounds...I don't know...I guess...rather...familiar? :)

There are last-minute twists and turns within the plot, betrayal--
all the stuff of a good mystery!
And, people are definitely in danger!
Some die.
Some live.
Just a good solid mystery, in my humble opinion, and my husband backs me up on that!

Do you like mysteries?
Do you have a favorite author? Series?
I'd love to know your thoughts.
Posted by Lynn @ Smoke & Mirrors at 1:50 PM