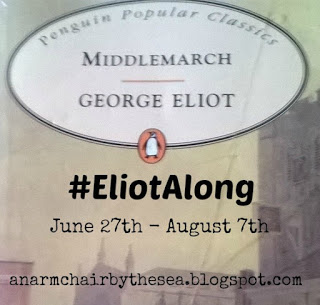 I know virtually nothing about George Eliot except that "George" was actually a woman.
I had read somewhere that she published under a male pen name so her work would be taken seriously. Remember--it was the 19th Century! Think patriarchy. Serious patriarchy.
Males in control. Total. Control. Got it? Yeah...and though it is now the 21st Century,
there is still definitely more progress to be made with regard to equality for all.
But at least progress has been made. That's the good part!
That was all I knew prior to reading the 44-page Introduction to the Oxford World's Classics edition of Middlemarch that I checked out of the library on my way home today. :)
Mary Ann Evans. She was an extremely smart person, all of her knowledge gained
as a result of her self-guided efforts, especially since educational opportunities
for females during her lifetime (1819-1880) were sparse to nonexistent!
You might have noticed the meme #EliotAlong above.
This Middlemarch Read-Along is the brainchild of Bex of An Armchair By the Sea.
She and I are cohosting the Little House Read-Along 2016 and that has been a blast!
Since then I have also participated in the Re-Readathon hosted by Bex in March.
Yes...Bex is busy!  :)  And now she's keeping me (and many others) busy as well!
I remember reading part of Adam Bede many years ago but I don't remember finishing it.
But now for Middlemarch! Wow. I had no idea of this book's
outstanding significance in literary evolution and history! Very very cool!
Here is my #EliotAlong page where I will post trivia and weekly update links. 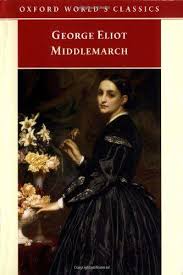 Middlemarch was originally published in 8 volumes,
hence the eight sections:

The reading schedule doesn't exactly correspond
to the eight sections,
but I'm sure it will work!

To be honest, I do NOT need to commit to another reading challenge, event, or read-along.
But...I want to anyway...so I have! :)

Join us, if you dare!
This is a great opportunity to read a chunkster classic!
And a read-along offers its own built-in motivation and support network!

Have you already read this one? Any thoughts?
Posted by Lynn @ Smoke & Mirrors at 10:58 PM