The distance between Dallas and Too Much, Texas...

From Here to Home by Marie Bostwick
It was amazing to revisit Mary Dell and Howard, Taffy, Cady, Rob Lee, etc.
But it was also amazing to meet some new folks,
proving the celebrity life may not be as good as may appear to us 'common folk'!
The Borders Book Club has read and discussed Bostwick's first book
in the Cobbled Court Quilt series, A Single Thread,
and a stand-alone, The Second Sister.
Whereas Between Heaven and Texas was a prequel to the Cobbled Court Quilt series,
this book continues onward with Mary Dell and Howard's lives. 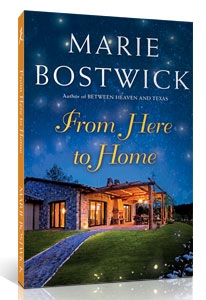 We immediately learn that Donny (Mary' Dell's ex/Howard's father), who ran off just a few months after Howard was born, watches every episode of Quintessential Quilting at his local bar. It is in this way that he keeps up with his 'wife' (Yeah, it turns out Mary Dell never actually filed for or obtained a divorce from him in these past 30 years...) and son. In the first chapter Donny manages to attack an obnoxious kid in the bar who dares to refer to Howard as a "retard." I was glad that Bostwick demonstrated how disrespectful this word is...and that it should not be used.
I am glad this word is now unacceptable! "Politically correct" language is nothing more or less than simply speaking respectfully. Nothing "political" about it, in my humble opinion!  :)

One of the new-to-Too Much, Texas characters is Holly Silva, daughter of a successful actress/singer, Rachel, and an Argentenian actor turned independent film director, Christian, who died of a drug overdose before Holly turned 3 years old.
Besides her mother's good looks and in spite of the anxieties she'd inherited from her father,
Holly had a kind of spark, an energy that made her stand out form the crowd.
She was genuinely interested in other people and cared about and for others,
and that trait shone through in all she did. (6)
Bostwick is so skilled at seamlessly blending new characters into this series. This is one of the aspects I most admire in her writing. It turns out the House and Home Network (HHN-TV) is undergoing some "restructuring" and Holly has an interview scheduled to possibly replace Howard as Mary Dell's co-host of Quintessential Quilting. Though Mary Dell and Howard have no knowledge of these proposed changes...yet...

However, these are not the only big changes to occur in Mary Dell's life. As she herself had "always" said:
You never knew what might happen or who might come out on top.
The sun rose anew every morning, and when it did,
you might be about to have the best day of your life. (13)
Mary Dell and Holly are both energetic, organized, caring people. Although the new 'evil' HHN-TV programming VP, Jason, is determined to cancel this show, he doesn't realize what kind of team he has created--not at all what he intended. Rather than a contentious, competitive relationship, Mary Dell and Holly are both honest and straightforward, and realize their only strength lies in their unity. And that's nothing compared to the help they receive from Mary Dell's mother, Taffy, whose mind is evidently more coherent than the family may have given her credit for...as the new Director, Artie, can attest. As a ploy to further sabotage Quintessential Quilting, 'evil' Jason sent this totally inept Director who doesn't understand the format of the show as an educational/learning experience in the least. He applies 'reality TV show' directorial ploys to Quintessential Quilting! Taffy insists that Mary Dell invite him to the ranch for supper and an overnight stay on Sunday, and he mysteriously becomes ill for several days, preventing him from directing the two episodes filmed the following Monday. This allows Mary Dell and the Assistant Director the opportunity to finalize edits on these two shows for a final product reflecting the show's mission. But 'evil' Jason manages to cancel the show anyway.

Howard becomes ill and Donny returns to 'save' him. This, just as Mary Dell has finally realized she really does love Hub-Jay, and has become engaged. But what will happen now with two men in her life? One of whom she never divorced in these past 30 years...hopeful that he might someday return and be the husband/father he had never been. In Mary Dell we see the result of an 'empty nest' as Howard begins to live independently, and she struggles to accept and even celebrate this, telling herself it really was her ultimate goal in raising him. Howard has had to overcome the challenges of Down Syndrome throughout his lifetime, though Mary Dell is a bit upset at Howard's just willingly accepting his father back into their lives, as she tells Holly,
"For Howard, it's like nothing ever happened.. I don't think he understands."
"Maybe," Holly said. Inside, however, she wondered if perhaps
Howard understood things that other people didn't.
Maybe, having had to struggle with his own natural challenges and limitations, as well as
those imposed upon him by a world that has little patience or tolerance and is quick to assign blame and presume motive for actions it knows nothing about, Howard had already mastered a lesson that few ever grasp. Maybe he knew that most people are doing the best they can
with what they have and that nobody is really in a position to judge anyone else. (310)
Yes! Yes! Yes! This!! And yet, when you (or in this case, Mary Dell) are the one who has been wronged, it can be so very much harder to put this into action!

Perhaps the most poignant and dysfunctional character is Rob Lee, an alcoholic who obviously suffers from PTSD and 'survivor guilt,' as his brother-in-law (Cady's husband/Linne's father) was killed during their patrol mission in Afghanistan. He describes his alcoholic consumption as
racing to stay ahead of the demons that were closing in on him step by step and day by day. (296)
Rob Lee has blamed himself for the loss of his three buddies' lives, since he recognized the Afghan who evidently placed the IED just seconds prior to it exploding, destroying their vehicle and killing all but himself. He blamed himself for neglecting the basic military training to never trust anyone, even a man who spoke passable English and just days before had invited you him into his home and served you tea. You had even gifted balloons to his children. This rang so very true for me. I know a Vietnam vet who stated that in the aftermath of learning to not even trust women or children, it was many years before he fully adjusted to civilian life. He described how one of his buddies was blown to bits by an infant wired with an explosive when the child's mother pretended to bend over to tie her shoe, thrusting the child into the soldier's arms to hold... I cannot begin to imagine... I am relatively certain I could never handle the emotional/psychological stress of a soldier's life, though we never know what we could do unless/until we must, I suppose. As it turns out, Cady believed she had caused her husband's death, as they argued during their last telephone conversation, which she ended with this statement, "I want a divorce." Definitely enough guilt to go around between this brother and sister, eh?

Both Rachel and Hub-Jay discuss how superficial their relationships have tended to be as a celebrity and/or rich, successful business person. I'm certain that isn't true for each celebrity or rich person, but it appears to be rather common, if you can believe what is reported in the media. And Rachel demonstrates just how untruthful sensationalistic journalism can be. I personally discount much of the outrageous journalistic reporting I encounter, which isn't much, since I do not even watch TV. However, both Hub-Jay and Rachel eventually discover 'real' relationships!

After reading A Single Thread, Bostwick's first installment in the Cobbled Court Quilt series, I felt it was very "preachy," insisting that no character could be truly happy in life until s/he had discovered God and Christianity and was attending church regularly. However, I did not find that to be true of the other books in the series after that first one. And in this book, I felt she went even further somehow. As Mary Dell reflects upon the last night she was in Dallas and slept with Hub-Jay,
What happened in the night, the awakening of passions she thought had passed her by,
was not the result of an impulse beyond her control, a Fatal Flaw.
It was a choice she had made. She understood that by every moral standard she'd ever
set for herself, what she had done was wrong, but she wouldn't feign regret she didn't feel,
heaping one transgression upon another. (126)
I found that to be refreshingly honest. Though she felt it was wrong to have had sex with Hub-Jay since she was technically still married to Donny, and she and Hub-Jay weren't married, she wasn't going to be a hypocrite about it. I like that, though I admit I felt it was surprising coming from Bostwick, since I get the feeling she is basically very conservative/Christian in her views, and her characters also tend to be, though considering this is set in Texas...I assume that is the norm.

The story line of Holly rescuing Stormy and Rob Lee helping her to calm him down and eventually train him to be ridden, provided great symbolism between the trauma suffered by both Stormy and Rob Lee, and their respective ability (or inability, as the case may be) to overcome the past. As Rob Lee kissed Holly for the first time,
Holly understood that happiness is not measured by or limited to what you have known in the past but by what you will allow yourself to experience in the present and risk for the future. (242)
Agreed!

Bostwick also proves what a small world it is--you know, that six degrees of separation thing? Yeah, that definitely proved to be true regarding Donny's location. And Hub-Jay demonstrates such restraint and respect when he does finally have the opportunity to meet Donny. What could have very easily been a confrontational and contentious conversation was not. To Hub-Jay's credit.
Hub-Jay liked to think of himself as sophisticated and reasonable, a gentleman.
But when it came to issues of Mary Dell's happiness, safety, and honor, there was no doubt
in his mind that, should the occasion arise, he'd tear off his coat, roll up his sleeves,
and beat the crap out of any man, anywhere, who even dared to speak ill of her.
That was how he knew he loved Mary Dell. Because he'd never in his life felt the urge
to throw a punch on behalf of any other woman. (286)
Cute!

Bostwick can be trusted to deliver an enjoyable read that also addresses
societal/cultural issues, without making it too 'heavy.'

Have you read any of her books?
Or, do you know an author's writing you feel may be comparable?
Definitely glad to have read this!