Superheroes come in all sizes and shapes... 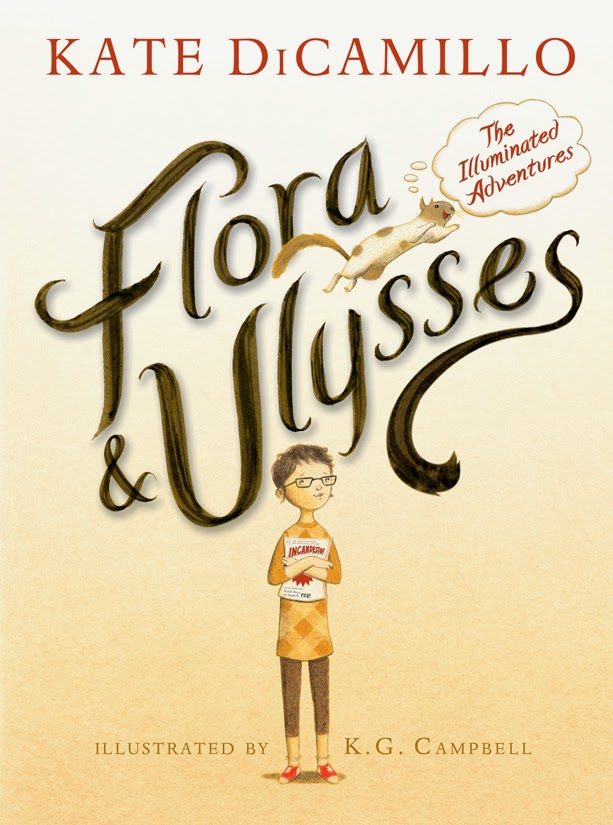 Personally, I feel every person would benefit from reading this book, particularly if you consider yourself to be an "adult"! :) It reinvigorated that childish ability to be fascinated by life in general, and imagination overall! These are all utterly outlandish and unique characters! Though every reader would probably recognize characteristics from ourselves or those we know...which, in my opinion, makes them so enjoyable, relatable, and, dare I say it...believable!?! Flora repeatedly refers to herself as a "natural-born cynic"! Yet she proves that even cynics can believe in seemingly incredible happenings and super-hero beings! As, I'm convinced, we all should...at least on occasion!

Flora Belle Buckman is no ordinary human, Ulysses is no ordinary squirrel, and very few of the characters depicted within this book would likely be classified as "ordinary" or "normal," (But seriously, which of us truly is?) but they are all true to themselves! Alfred T. Slipper (appropriately named) and Incandesto; the little Shepherdess (though inanimate, nevertheless seemingly very important to Flora's mother); Dr. Meescham, the "Doctor of Philosophy" who doesn't necessarily know much about medicine (though her husband, the "MD," evidently did!); William Spiver, the "temporarily blind" grand-nephew of Flora's neighbor, Tootie; Mr. Klaus, particularly the feline so named; Dolores, the parakeet; Flora's mother, the "criminal element" as well as Flora and Ulysses' arch-nemesis; and finally my favorite character after Flora and Ulysses, her father, George Buckman, who always politely introduces himself, repeatedly! It appears George is apparently the king of understatement, saying "Holy unanticipated consequences," as they hurriedly exit the Giant Do-Nut shop in the wake of the total chaos caused by Ulysses.

Like Flora, I also had a stage of total fascination with and immersion in comic books at one time during my childhood. However, I do not recall one entitled Terrible Things Can Happen to You! I am uncertain if I would have tried reading that one or not, given its title... :) However, some of the tips contained within these comic books appeared to help guide Flora throughout her extraordinary adventures with Ulysses! For example: "Do not hope," and, "This malfeasance must be stopped!"

I adored the mixture of some comic-like illustrations and text, which served to launch me into another "reading world" than that to which I've evidently become relegated and accustomed--the boring adult "text only" books! (Okay, I am just kidding, but I do truly enjoy a romp through "juvenile" literature periodically!) I don't know abut you, but I am extremely glad to have younger children (in my case 10+ grandchildren) for whom I can purchase gifts, especially since I am the self-proclaimed "book grandma"! The advantage to me? I get to "preview" them before gifting them! You know, after all...uh-hum...it is my "responsibility" to do so as an upstanding adult and familial matriarch to make sure they're "safe for consumption by children of all ages"! It just so happens that I take that responsibility very seriously! :) At least that's my excuse to re-immerse myself in child-like imaginative reading experiences.

The irony and subtle adult humor of Mr. Tickham proudly presenting his wife with the penultimate birthday gift of a Ulysses 2000X vacuum cleaner was not lost on me! After all, every wife dreams of receiving a household cleaning tool for her birthday, right?!? And to introduce the story with a few pages of concisely drawn and emotive illustrations definitely puts the reader in the light-hearted mood that makes this reading experience even more pertinent/enjoyable. Good job, Kate and K.G.!!

As an adult, I could strongly relate to the following passage on so many levels:

Flora's mother was in the kitchen. She was typing. She wrote on an old
typewriter, and when she pounded the keys, the kitchen table shook and the
plates on the shelves rattled and the silverware in the drawers cried out in a
metallic kind of alarm.
Flora had decided that this was part of the reason her parents had divorced.
Not the noise of the writing, but the noise of the writing itself. Specifically, the
writing of romance.
Flora's father had said, "I think your mother is so in love with her books that
she doesn't love me anymore."
And her mother said, "Ha! Your father is so far off in left field that he wouldn't
recognize love if it stood up in his soup and sang. (p. 27)

Now, perhaps this passage resonated so strongly with me due to several reasons. First, when I was in college following high school, I lived in a sorority house my second year and had an old "manual" Royal typewriter that my mother had brought home to me when I was 6 years old. I loved that thing!! I stubbornly drug it along with me, ostensibly to type my own papers, though I eventually did so for other people, earning a little extra money. Those typewriters were LOUD, and I do mean, LOUD! I was tucked away in the basement "common room" typing, oblivious to any disruption, but some of my sorority sisters would complain the next morning about the noise that was emanating throughout the building as I typed... Oops!! ;) Secondly, being divorced, I can relate to the two differing perspectives regarding the break-up of a marriage.

Third is the additional irony that Flora's mother wrote "romance" novels. As a young teen (tween as we now call them), once I had exhausted all the local library reads contained within the children's, western, and animal sections (as well as some biographies), I finally read a few books of what I will term "semi-romance," though always including a mystery! (Note: there was no "YA" literature section back then!) Although they were halfway interesting to me at the time, after 5 books or so I moved on to classic/adult literature. I have heard the term "literature snob," and although I don't consider myself to be one, perhaps I qualify by some people's standards... The books we shelved as "romance" at Borders (prior to the Fifty Shades of Gray and advent of soft porn being classified as romance) held little appeal to me. I read a couple just to be sure, but romance novels are not my preference, as is my preference to avoid horror books... My point is that adults can also connect with this book and others classified as "children's literature," just as we can with The Muppets or Fraggle Rock TV shows.

Have you read or reread a children's book recently? Or do you have a favorite? I adore much of the more current juvenile/children's literature! How about you?
Posted by Lynn @ Smoke & Mirrors at 2:03 PM