So much more to this book than just the cover and title... 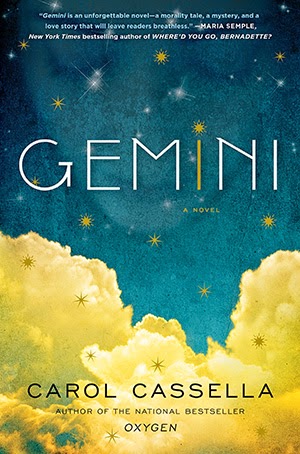 I first read this book roughly one month after its release. Amazingly, I had managed to meet and speak with the author twice by that time! :) She seems to be a genuinely sincere and "nice" person! Beyond that, however, Gemini is definitely up there on my favorite reads for this year, and perhaps overall! I gently (or not so gently!) encouraged the book club I facilitate to read it and we discussed it in December 2014. Of the four of us, one didn't like it at all, one liked it, and two of us loved it! This prompted conversation and discussion that was amazingly diverse, including such topics as scientific validity and genetic analyses, death, the "right to die," medical intervention to keep a body "alive," love, selfishness, and familial influences on adult attitudes and beliefs. It was thought-provoking and enlightening! :)

My challenge for this book review? How to "translate" and condense 4 pages of notes and about 30 stickies placed throughout the book without writing another whole book in the process! ;) One of the things I loved most about this book was the fact that certain scenes/explanations were left up to the reader to interpret. I always feel that makes for a much more personalized reading experience, and great discussion with other readers! That proved true for our book club!

I loved Charlotte, though I do have reservations about her profession, particularly regarding a patient like Raney--keeping a body "alive" when there is no true hope of a return to a "normal" or interactive life. If a body is doomed to remain in a vegetative state, is that "living"? I don't believe so, but then I do believe in reincarnation, so that probably makes it easier for me to "let go" of one lifetime, since many more lifetimes will be experienced by any one soul. Charlotte was definitely an independent person, a feminist, if you will, and she found it difficult to truly "get close" to Eric. One book club member felt Charlotte was selfish, for not compromising or being dissuaded from wanting to establish a family that included children. Personally, I agree with another member who stated that it seems some people are just determined to have their own biological children, while others are not... The overall consensus was that Eric and Charlotte loved each other but wanted very different things from their lives at this point in time... Enter Jake. 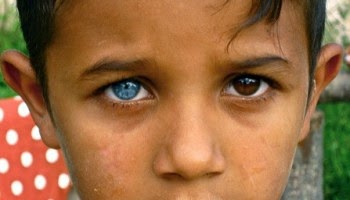 It is Jake for whom I had the most sympathy. He was truly a child with only one person serving as his life's anchor--his mother, Raney. I was so disappointed for Raney (and Bo) when she identified Jake's paternity based upon his physical characteristics at birth, for I truly wanted this baby to be a "love-child." Although we all believed Raney initially accepted Cleet into her life because he filled certain needs by respecting and caring for both her and Jake, he was good looking and a hard worker--we felt she did eventually learn to love Cleet. But in my opinion, she and Bo were true "soul mates." There was seemingly no effort involved for each of them to not only accept, but appreciate and respect the other. Finally, out of pure financial and psychological desperation, Raney brings Dave into their lives as a convenient "provider" and companion. However, this decision carried with it some dire results...

How ironic and tragic that Raney helps her grandfather avoid institutionalization, but only a guardian ad litem, a total stranger to her, in conjunction with her medical team, oversees her own care. Her "husband" (I'm using this term loosely.) David refused to participate, not only denying Jake access to her, but also lying to him about her unexpected and sudden departure. This prompted discussion of living wills and self-selected medical advocates, both of which each of us should have prepared, even if we do have children! Interestingly, two of us have legally appointed friends to serve as our medical advocates, thus relieving our own children of the ultimate responsibility to "choose," if we are ever find ourselves in a similar predicament in the future.

We also considered the possibility of "fatal flaws" in individuals' genetic codes, particularly with regard to bearing children and possibly passing those flaws along to future generations. There were mixed reactions among us as we discussed various scenarios where our genetic code could influence us to make certain life-altering decisions. Personally, I don't want to know... Firstly, just how accurate is this "analysis" and how can we know exactly what the chances are of transmission to future generations? (In my opinion, we can't...) After all, "scientific knowledge" is "man-made"--it is us trying to make sense of our world. That is not to diminish its value, but I believe it would be dangerous to ever consider it to be absolute, because it isn't...rather, it is  ever-changing as new "discoveries" occur.

It was fascinating to consider the reasons behind each of these characters' decisions and life development. I was so very sad for Bo and Raney, as well as Jake, though by the book's end I was thrilled for the new beginnings and optimistic about the future... My description of these characters may seem very confusing, but trust me, it all makes sense in the end! Such depth and complexity underlies this deceptively brilliant story line...and that is what I appreciate most about this book.

Exactly who was responsible for Raney's accident? None of us felt certain, even after rereading the passage aloud. And to what degree did it really matter? In my opinion, Dave was already destroying both Raney and Jake psychologically; it was a simple extension to imagine him harming her physically. And...did Charlotte finally decide not to keep providing mechanical life to a human body? Or did she follow the usual protocol and continue with  medical interventions? But...what would you do? 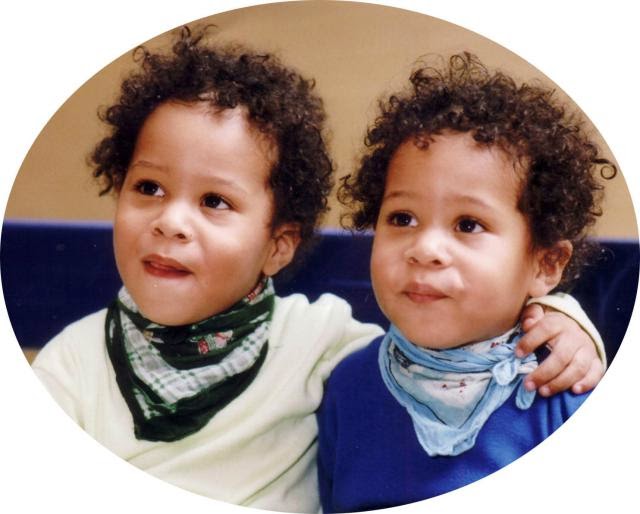 As many people may already know, Gemini is an astrological sign referring to "twins." So, where are the "twins" in this book? I highly recommend you read it to answer these questions for yourself! And aren't these two adorable?!? :)