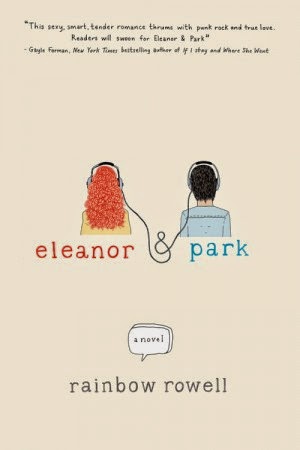 I had no real expectations when I started reading this book. In fact, I put off purchasing a copy to read for quite awhile and just kept wondering  about it, until...I...finally...succumbed... And I'm so very glad I did! My curiosity was well rewarded with this reading experience! For me, this story is all about acceptance and willingness to open ourselves to experiencing others just as they are... At least for this book, Rowell ranks right up there with John Green, in my opinion!

Eleanor had a very tough time during her life and survived and thrived despite many challenges. I, myself, was provided the basics and some extras throughout my childhood, so my heart hurt for the disparity Eleanor had to endure: no new clothes, nor even clothes that actually fit but were several sizes too large, no personal toiletry items, not even deodorant, shampoo, toothpaste, toothbrush... Nor the right to privacy while bathing, etc.! (There was no door on the one bathroom in the household, per her stepfather's demands. Now that's just creepy, in my opinion!) I have known children and adults who must endure despite similar deprivation, and that creates its own level of unhealthy stress, typically leading to emotional challenges and imbalances. Life is already tough enough, but such circumstances make it ever so much tougher!

Additionally, it is so very difficult for her to reconcile her mother's apparent kindness and caring about her and her siblings with that same person's insistence to remain with a man who abuses her children in so many ways: negligence and certainly verbal and emotional abuse, at the very least. No child should be forced to live in such an environment! Research keeps proving that these other forms of abuse are just as harmful as physical abuse.Although the only person Richie appears to physically abuse currently is his wife/Eleanor's mother, there is always a threat of that same pain being inflicted upon the children, with Eleanor hinting at the possibility of sexual abuse, as she makes it obvious that she feels this could certainly be happening now or will more than likely occur in the future with her younger sister (remember the door-less bathroom...), hence her feeling of utter desperation to rescue her siblings from life with this man in his house. Yet, realistically, she cannot...

Although Eleanor did file a report to involve Child Protective Services, she was then sent to live elsewhere by her mother for a year as punishment. (And I suspect, to protect her from her stepfather's anger.) She was only allowed back in the house on condition that she never again report anything to anyone about their lives. As I read, it was difficult for me to imagine why this man kept this woman and her children with him. Although it had to be the power and control that he could wield daily; abusers are all about controlling and manipulating their victims.

This girl's life is rather obviously unlike that of children we typically know in the U.S. middle class, though I always wonder just how many of them are actually hiding similar deprivations and physical threats in their physical lives, so they can appear to be as "normal" as possible, and thereby hopefully "get along" in society at large. My heart goes out to them. For, as Harold states in The Unlikely Pilgrimage of Harold Fry by Rachel Joyce:

The world was made up of people putting one foot in front of the other, and a life
might appear ordinary simply because the person living it had been doing so for a long
time. (58)

And so many times children simply learn to cope as best they can, particularly when living with an abuser in their own home. So never assume from appearances alone that anyone, particularly a child, has a "normal" life. Though Park has never endured any such deprivation as Eleanor, he still, as do all of us, must conquer his own demons, so to speak! And it is especially difficult to be a teenager, perhaps even more so in current times. (Though I'm convinced every generation feels they have it much worse than those in the past. :))

Park describes Eleanor's mismatched ill-fitting clothing and accessories (a dozen necklaces with a man's flannel shirt and "scarves wrapped around her wrists):

She reminded Park of a scarecrow or one of the trouble dolls his mom kept on her
dresser. Like something that wouldn't survive in the wild. (8)

As she stands in the aisle of the bus on her first day at this new school, trying to find an empty seat (since every student sitting alone in their seat had scooted over to prevent her from sitting with them), Park suddenly scoots over:

"Sit down," he said. It came out angrily. The girl turned to him, like she couldn't tell
whether he was another jerk or what. "Jesus-fuck," Park said softly, nodding to the
space next to him, just sit down."
The girl sat down. She didn't say anything--thank God, she didn't thank him--and she
left six inches of space on the seat between them.
Park turned toward the Plexiglas window and waited for the world of suck to hit the
fan. (9)

I started loving Park at that very moment! And, the "bullies" who sat at the back of the bus left him/her alone at that time, although Park does consider all the alternatives to not sit with her, he finally relinquishes and accepts her continuing presence in his bus seat. The progression of their relationship is definitely unique and Park works hard to get her to open up with him at all. (This relates directly to the cover picture.) As Park begins to reach out to Eleanor, he must be creative, because Eleanor has learned to be as invisible as possible to the world even to her own "parents" in her own home! It is a strategy to help her survive with as little humiliation as possible. But Park finally gives up on his own strategy to "seem cool" and ignore Eleanor, as he reaches out in unique ways to communicate with and get to know her.

...maybe...he just didn't recognize all those other girls. The way a computer drive will
spit out a disc if it doesn't recognize the formatting.
When he touched Eleanor's hand, he recognized her. He knew. (72)

Disintegrated.
Like something had gone wrong beaming her onto the Starship Enterprise.
If you've ever wondered what that feels like, it's a lot like melting--but more violent.
Even in a million different pieces, Eleanor could still feel Park holding her hand...
She sat completely still because she didn't have any other option. She tried to
remember what kind of animals paralyzed their prey before they ate them...
Maybe Park had paralyzed her with his ninja magic, his Vulcan handhold, and now he
was going to eat her.
That would be awesome. (72)

I believe these passages exemplify Rowell's writing expertise; to me, this felt so authentic and yet aptly expressed Park's feelings of love and fascination, as well as Eleanor's dry sense of humor. Rowell does a good job of exposing prejudices and discrimination, both as victims and perpetrators, as well as progress with some of the characters learning to overcome such beliefs and learn to get to know people for who they are. I LOVE THAT!!

Once upon a time, Park had a thing going on with the most popular, and perhaps meanest, girl in the neighborhood, Tina. She still had his mother cut and style her hair. He would ignore her come-ons...

He didn't even think Tina really liked him, deep down. It was more like she didn't want
him to get over her. And not-so-deep-down, Park didn't want Tina to get over him.
It was nice to have the most popular girl in the neighborhood offering herself to him
every now and then.
Park rolled onto his stomach and pressed his face into his pillow. He'd thought he
was over caring what people thought about him. He'd thought that loving Eleanor
proved that.
But he kept finding new pockets of shallow inside himself. He kept finding new ways
to betray her. (178)

Wow...he really is growing up! Good for him! I particularly loved the fact that Park fought for Eleanor's "honor" and didn't use his martial art moves, fearing he might severely hurt his opponent. And later he is aware of the ways in which he could actually kill Richie--he finds the man drunk and disoriented on his own lawn.

She was tired of missing Park. She just wanted to see him. [...] Even if he had spent
his formative years tongue-kissing Tina. None of it was vile enough to make Eleanor
stop wanting him. (How vile would that have to be? she wondered.)
Maybe she should just go over to his house right now and pretend that nothing had
happened. Maybe she would, if it weren't Christmas Eve. Why didn't Jesus ever work
with her. (186)

Indeed. This poor child had no one and nothing, other than Park. I adore Park's parents for helping him help her when she needed it most. I trust those three words were "I love you." If not, then all hope is lost...and I refuse to just give up on these two wonderful people!

Oh, really...if you haven't read this, you should! An excellent book! I will be reading some of her other books, too. How about you? Thoughts on Rainbow Rowell's writing? This book?
Posted by Lynn @ Smoke & Mirrors at 12:56 AM