Ana is not Anne--a great read all the same! 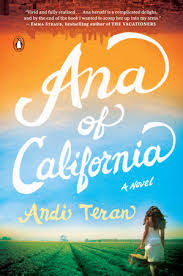 Ana of California by Andi Teran
I cannot recall exactly how I got wind of this book,
but am glad I did!
I was reminded of The Lemon Orchard by Luanne Rice and
The Same Sky by Amanda Eyre Ward,
probably because of the Mexican protagonists.
I am not a fan of books strongly compared to
or supposedly inspired by other works.
For example, this book was billed as a
modern-day Anne of Green Gables and I get that,
but I hated having this in the back of my mind as I read.
This was a really good read, but not because of any other work to which it may be compared, in my opinion.
It was a well-written book, period.


Ana is an orphan about to become emancipated, but she has been through five foster homes, and a couple of placements into group homes during the past ten years. Her case manager has one last opportunity for her--a farm internship. Poor Ana has experienced much deprivation and abandonment in her lifetime. First her parents die, and then her grandmother, who was the only one to actually provide her with a real "home" and who demonstrated love to her. Though she feels/knows she can trust the social worker, she still cannot bring herself to talk of the tragedy she has witnessed in her very young life. Having worked as a case manager, I know that foster homes can be anywhere on a scale from Great to Horrible--as are homes headed by biological parents/caregivers, unfortunately. Ana's parents created and maintained a Horrible home but her abuela (grandmother) created a kind, caring, loving, and respectful/Great home. Unfortunately, she didn't live long enough to see Ana raised. :(

Ana is a logophile, she loves words and hesitates not to use the 'big' ones! Such as "ludicrous"... And she does like to talk, as she states, it is a "nervous habit," this "filling the air." I can relate. I was all about that when younger. It is only after reaching age 45 or so that I truly learned not to panic and just start talking, but rather to wait and listen first! :) (And, no, I do not manage to do this ALL the time, but I usually remember... As with anything else, the more I practice, the better I get.)

This is a city girl sent to do a country girl's job! Ana is able to connect with Emmett and Abbie through music and art, but admits she knows nothing about farming and isn't particularly interested, however, she is motivated to try simply to avoid group home placement again, if nothing else. Those connections both help alleviate some of the tension created when Ana accidentally pulls all the parsley plants rather than pulling the "weeds" from among the parsley plants. This reminded me of a former co-worker of mine whose husband finally forbade her from weeding in the garden after pulling up the pepper plants instead of the weeds twice in one season! Hey, if you don't know, you don't know! They should have done a better job of educating her before placing her out in the field, in my opinion.

Alder is a typical old mountain man who knows the natural world like no other! He even gives Abbie and Ana a 'tour' of his beehives and Ana learns that bees die as a result of stinging someone. On the way home they discuss his statement that bees are really "angels on earth." Ana:

"Maybe they have stingers for that very purpose. To give life, take it, and also
to maybe keep the rest of us from realizing how good they can be.
And maybe when we see one, away from any others, nowhere near a hive, maybe
it's there to remind us that goodness in disguise is always buzzing around in the periphery."

It is actually Ana who saves the day for Garber Farms. She acts selflessly and through her artwork and caring, helps the other workers feel like family. But she proves she is not perfect, particularly in her relationship with Cole. I especially appreciated the way that Teran juxtaposed the different lives of these teens and the way they all felt unhappy and unloved with their families and 'homes.' Though Ana reminded them that even having a "home" about which to be unhappy and dissatisfied was an improvement upon her own situation. Ana was quite empathetic and accepting of others, as proven by her accompanying Brady into school on the first day, as well as willingly accepting Rye's personal disclosure to her. She also had some almost unbelievable experiences within foster homes regarding lack of food and illogical long-term 'punishments.' I loved the fact that she made sure her case worker was well aware of the horrid conditions in these certain homes. She wanted to be an agent for change...in a good way. As she stated: "Sorry, but not sorry," for helping the younger children get something to eat even if it was against "the rules" imposed by the foster parent.


As Ana and Cole would say to each other..."To beautiful endings."
This was a bit 'happily ever after,' but that's okay. It works!

Have you read this one?
Or Anne of Green Gables?
I've read them both and loved them both!

Anxious to read Before Green Gables
by Budge Wilson now!

(Of course, I love the cover on the left
with the kitty!)