Three survivors, one raft, and one small island..

The Cay by Theodore Taylor
I last read this book when I was about 13.
I remembered just how much I loved it then and want to send it to my grandchildren.
However, before mailing it off, I wanted to re-read it.
Especially since I'm participating in Bex's Re-Readathon!
And this one also counts for #ReadMyOwnDamnBooks and Historical Fiction!
So glad I did. This book is so very powerful!
Though I remembered some of the main points from my initial reading, I certainly did not remember everything! It was virtually impossible to imagine Phillip's predicament in almost every aspect! Poor guy!
One minute you and your mother are traversing the sea on a marine vessel and the next you awake and are drifting aimlessly on a raft, with a strange old man and a cat! Eek!
Although, for me...a CAT!! Yes!! I do love a furry feline! :)
And all this when only a few days earlier, Phillip had thought
I was not frightened, just terribly excited.
War was something I'd heard a lot about, but had never seen.
The whole world was at war,
and now it had come to us in the warm, blue Caribbean. (10)
This rang so true to me as the thought process of an
11-year-old child! Just purely curious... Following the initial
attack,  Phillip  defies his mother's edict and goes out to the  bridge/water area  which was to be forbidden territory to him. Though I must give him credit for not lying and admitting where he'd been. As so often happens, he just wanted to see what he could see. However...
My mother closed her eyes and pulled me up against her thin body. She was like that.
One minute, shaking me; the next, holding me. (14)
And, oh, isn't that just so true! I know there were times when I did exactly that with my own sons! I get it! And I'm sure they and their wives all do the same thing to their own children on occasion! Phillip wondered why his father hadn't simply ordered his mother to just stay on the island, then realized that he "just wasn't that kind of man." I don't know. Wow, that would be a hard call, but I believe that if my spouse was considering evacuation during wartime when the area had already been attacked...I might have fought very hard for them to stay and keep the family unit together. 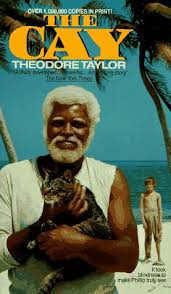 Initially, it is very difficult for Phillip to accept the fact that his only companions were Timothy, a very large Negro who appeared to be quite old, and a "big black and gray cat." No sign of his mother. And once he heard Timothy speak he realized he was a native of the West Indies and remembered seeing him work as a member of the deck gang of the Hato, the ship on which he and his mother had sailed. It was very difficult for Phillip to ignore the fact that to him Timothy appeared to be ugly and old, and the fact that he was a Negro didn't help at all, especially when his mother had made it clear that Negroes were "different" and "lived differently," and "That's the way it must be." He had been taught there should always be a separation from the Negroes. And here he was...with no choice!

Phillip's head hurt mightily and Timothy explained something large and heavy had hit him in the head and it was Timothy who had hoisted him out of the water and onto the raft. A few days later the pain in Phillip's head subsides, but he is left totally blind, with no vision whatsoever. Of course, he panics,

I'll never forget that first hour of knowing I was blind.
I was so frightened that it was hard for me to breathe.
I was as if I was put inside something that was all dark and I couldn't get out.
I remember that at one point my fear turned to anger. Anger at Timothy for not letting me stay in the water with my mother, and anger at her because I was on the raft. I began hitting him and
I remember him saying, "If dat will make you bettah, go 'ead." (46)
Timothy was wise in so many ways. And always trying to help Phillip, not just with physical survival, but as true moral support. At this point Timothy tells the story of a man with similar injuries, but that his sight returned within 3 days. Weeks later Timothy states it was months before other man's sight returned. When Phillip questions him about this discrepancy, Timothy admits he can't remember exactly how much time elapsed, but knows his sight did return. At which time Phillips rightfully deduces Timothy is just trying to give him hope, and he appreciates his efforts. 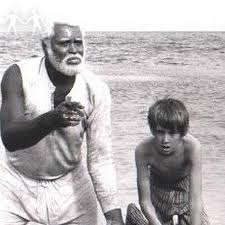 Timothy does so much more than that, however. He has enough skills to be able to catch fish, make fires, build a make-shift shelter, weave sleeping mats, build a crude containment system for trapping rainwater to drink and cook with. Not only this, but he creates an environment within which Phillip can learn to be sulf-sufficient on his own, just in case he is left to his own devices. Granted, they had the extra advantage of the supplies stored in the compartment in the middle of the raft:

"We 'ave rare good luck, young bahss. D'wattah kag did not bus' when d'raff was launch, an' we 'ave a few biscuit,
some choclade, an' d'matches in d'tin is dry.
So we 'ave rare good luck." He grinned at me then. (32)
As you might imagine, Timothy was only able to view all this as bad luck, at the ship being torpedoed, at his mother's unknown whereabouts, at his father's lack of knowledge that he was abandoned on this raft floating in the water with no sight of land... Timothy was able to think about immediate survival whereas Phillip was grieving all he'd lost, you would expect a child to do. Timothy admits he is uncertain as to his own age, but is aware he is at least 60 years old. Phillip immediately tells him he is almost 12, so that he will stop treating him like a child half his age! :)

Although they have a signal fire all setup on a rise and ready to light at any time, they only hear a plane a few times. There are so many islands similar to this one, it would be virtually impossible to search them all up close. Phillip is able to help Timothy in an area where his knowledge is limited. He is evidently illiterate and Phillip is able to help him form the letters H, E, L, P, with rocks just next to the signal fire. Phillip is kind and wise enough to realize this, but not mention it to Timothy and just help him... As much as I find it very difficult, if not impossible, to imagine being in this situation, I cannot imagine the utter hopelessness that much follow when you hear a plane as it nears the island, and then as it goes further away without showing any signs of having noticed the island or those on it. That would be totally devestating, wouldn't it?

It made me rather sad to consider this as a possibility, but I could only imagine that Timothy may well have felt responsible for Phillip's well-being due to much more than the fact he was an adult and Timothy a child. Timothy's initial use of the word "bahss" to address Phillip denoted the overt social hierarchy evident in the 1930's/1940's, that white men were bosses of the black men. Although their solitude and skills actually reversed that hierarchy on the island, initially, it was quite evident in both their actions and thoughts. Things progress about as well as they could have. They are able to fish and find enough food to eat, but the weather presents insurmountable challenges at times. A hurricane hits and survival is tenuous at best...regardless of all Timothy's pre-planning and safety precautions.

The first cover image above is a bit misleading, as Timothy made sure Phillip was tied to the with Phillip right behind him, sandwiching Phillip between the tree and the man, protecting him as much as possible. Simply put, Timothy thought of virtually everything!

Honestly, you should read this book, and if you have children? Definitely!
It would make a great book to share by reading aloud.
Or they could just read it and discuss it with you.

I have the sequel, which is actually a prequel, Timothy of the Cay on hold at my library.
I can't imagine that this book, detailing the Timothy's life prior to the ship going down,
won't be just as good as The Cay, but I really must know!
And if I like it as much as I suspect I will, then I'll purchase and send it to the grandchildren. 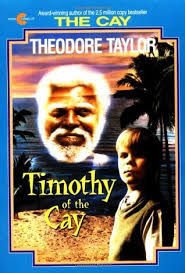 Do you read much "children's literature"?
I find I still love it, and appreciate having 11 grandchildren as a handy excuse to read it! :)
Posted by Lynn @ Smoke & Mirrors at 5:25 PM