One mountain, a huge old tree, one falcon, and...

My Side of the Mountain
by Jean Craighead George
Jean Craighead George was an amazing writer!
She is one the first authors I discovered
writing historical fiction for children.
However, as an adult I still love reading her books!
This book will count toward Bex's Re-Readathon and #ReadMyOwnDamnBooks, and now I can pass it along to my grandchildren! I can't imagine not loving this book,
if for nothing else, than the fact that one child actually does leave home and become self-sufficient, as so many have imagined doing, but for whatever reason, failed.
Mainly because most of us managed to "run away"
and be gone a total of 15-30 minutes.
Or perhaps we even made it an hour or two.
We definitely didn't hitchhike miles away and rough it on our ancestor's abandoned now-wild grown farmland!
It was obvious to me when I opened this book I evidently picked it up at a yard sale many moons ago for my children!
(I had written my now-abandoned married name in it!) :)
Kinda cool that now their own children will have the benefit of it in their household.

Sam Gribley announces his intention of running away and relocating to his Great-grandfather Gribley's farm in the Catskill Mountains. Sam and his four sisters, four brothers, and Mother and Father all lived in one apartment in New York City! Although that first night was scary and cold for him, he reminded himself of the crowded aspect of that small apartment that in memory now seemed so "bright and lighted and warm." All he started with was "a penknife, a ball of cord, an ax, and $40 saved from selling magazine subscriptions. (I remembered doing that as fundraisers for various school organizations!) He was smart enough to have also purchased some flint and steel with which to start fires, though that proved harder than he had imagined it might be. He remembered how his whole family had laughed when he announced his plan, and then the last trucker who gave him a lift and dropped him off at the edge of the woods laughed at him, too! He said,
"You know, when I was your age I did the same thing.
Only thing was, I was a farm boy and ran to the city, and you're a city boy running to the woods.
I was scared of the city--do you think you'll be scared of the woods?"
"Heck, no!" I shouted loudly.
As I marched into the cool shadowy woods, I heard the driver call to me,
"I'll be back in the morning, if you want to ride home." (11) 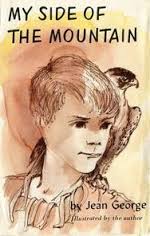 As you might expect, that first night wasn't a total success, to say the least! Sam hadn't even considered how much colder it would be in the mountains...there was still frost on the ground!

He was anxious to catch at least one fish since he had read that
By examining the contents of its stomach you can find what
the other fish are eating or you can use the internal organs as bait. (13)
To be fair, Sam had been taught how to whittle and tie his own fish hooks and various other outdoor/survival skills by his father, and he had obviously read and researched quite a bit. However, as with most new things we attempt, there was still room for him to learn much from experience! :) After his first hook came apart, he tied another and caught a fish right away!
I cleaned it like I had seen the man at the fish market do, examined its stomach, and found it empty. This horrified me. What I didn't know was that an empty stomach means the fish are hungry and will eat about anything. However, I thought at the time that I was a goner. (15)
Oh, poor Sam! I had to laugh when I read this! A lesson learned 'the hard way' that first night, was that he had 'camped' on the wrong side of the mountain and the boulder, getting all the wind and cold air blowing right on him!
I frantically ran around gathering firewood. This is about the only thing I did right
from that moment until dawn, because I remembered that the driest wood in a forest
is the dead limbs that are still on the trees, and I gathered an enormous pile of them.
That pile must still be there, for I never got a fire going. (15-16)
Throughout that first night he "shivered and shook" and later could even admit he'd "cried a little tiny bit." Following a harrowing night involving almost no sleep, Sam's wandering during his first full day in the woods is fortuitous as he happens upon a house. 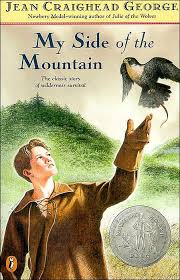 The owner and resident, Bill, takes him in, feeds him, lets him sleep, teaches him how to start a fire, and allows him to sleep in his house that night. He even tells Sam as he walks away the next morning that he'll leave the door open for him that night, if he wants shelter. But Sam is determined and after three more rides, arrives in Delhi, sleeps on the schoolhouse porch that night, then goes to the library to determine where his Great-grandfather's beech tree with Gribley carved on it might be. No one he had asked in town seemed to know. Miss Turner, the librarian, takes him into the library before it is technically open and gets the information he needs, even drawing him a map. 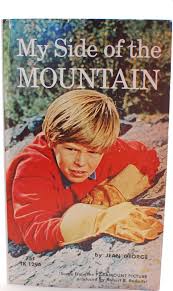 Sam does locate what is left of his Great-grandfather's old homestead, locates a nearby stream, and sets up camp. Eventually, he discovers a huge old tree that has died out somewhat at the base, creating a 'cavern' of sorts, and decides to live in it. He must burn and hack much wood from the inside, but he finally makes it his own. While exploring one day he discovers a peregrine falcon in flight. He stays by the stream where he has a good view of the sky and eventually is able to track it back to its nest, climbing the face of a cliff up to the nest and is able to take one of the babies. He names her Frightful and she not only provides him with companionship but is also a consistent supplier of meat for him. Interestingly, Jean Craighead George did have personal experience with falcons. Having read H is for Hawk not too long ago, I already had some knowledge gleaned from that book, which was, as expected for an 'adult' book, much more detailed, thorough, and comprehensive.
As you might expect, living alone in a natural envrionment, Sam becomes  very attuned to the slightest noises and/or changes in the natural environment. While lying quietly on his back in a meadow one afternoon, he realizes he is hearing a repetitive noise: "Pip, pop, pop, pop." He wonders aloud,

"Who's making that noise?"
I listened. "Pip, pop." I rolled over and stuck my face in the grass. Something gleamed beneath me, and in the fading light I could see an earthworm coming out of its hole.
Nearby another one rose and there was a pop.
Little bubbles of air snapped as these voiceless animals of the earth came to the surface. That got me to smiling.
I was glad to know this about earthworms. I don't know why,
but this seemed like one of the nicest things I had learned in the woods--that earthworms, lowly, confined to the darkness of the earth, could make just a little stir in the world. (58)
I loved this bit of observation of one of the smallest animals and most elusive, except following a rain, when I have noticed them coming up through the ground, though it was never quiet enough for me to hear the accompanying noises.

Sam is quite the smart person. His mother has taught him well about nutrition and the necessary nutrients to include in his diet. He starts feeling rather strange during the winter and realizes that he is probably experiencing the effects of a nutritional deficiency. He manages to get some deer from hunters who have shot them, are unable to locate them, and leave the woods without the animal, which has since wandered off and died of its wounds. At this point I must admit I questioned whether someone could skin and butcher a whole deer with nothing more than a penknife, but okay, I'll buy it...for now. :) I do realize that when you have no available options, you can sometimes make do with inferior equipment! I tell myself this is exactly what Sam did. It is while he is dressing out the deer that he realizes he is drawn to and craving the liver and immediately cooks and consumes it, and feels much better afterward. It is later that he realized he was lacking in vitamin C due to no fresh greens, fruits, etc., as he had been eating during the growing season. I also wondered if he might not have been somewhat anemic, too, since liver is so very iron-rich. But he learns that liver is an excellent source of vitamin C. He is amazed that basically his body knew what it needed. 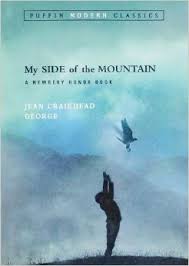 Amazingly, Sam makes a couple of friends in the woods, two hikers who stumble across him or vice versa, and finally a reporter who agrees to stay quiet if he can come stay with Sam for a week or so and experience this self-sufficient solitary lifestyle for himself. A game warden has also discovered his "camp," but Sam manages to avoid him for a night and two days, until he leaves. It is then that Sam realizes he needs to better camouflage his tree and the surrounding area, and does so. Then his father comes to visit around Christmas time, too. He is quite impressed with Sam's skills, determination, and perseverance. And the following spring he has a surprise when his father leads reporters and photographers into the woods to meet with and interview Sam. And...then tells Sam they have decided if he won't return to the city, they are bringing the family out to him in the woods! He has had lumber hauled in and commences to build a house for them all to live in. Not exactly what Sam had planned, but...he virtually has no choice! He is still a minor, after all! And they are his parents and must care for him until he is old enough to legally live on his own.

It was fun to re-read this 50 years later!
I could easily imagine why it had made such an impression upon me at 10 years of age!
I had forgotten there are drawings of the various plants Sam collected and ate and
diagrams for items Sam constructed: animal traps, his bed, a very small clay stove, etc.
And now I see she continued writing about Sam, making this a trilogy, with

On the Far Side of the Mountain
released in 1990 and
Frightful's Mountain released in 1999.
George died in 2012 at 92 years of age.
What a talent she had!
Oh, and, of course, I will be reading
these next two books and
purchasing them for my grandchildren, too!

And...I just discovered what is evidently
a picture book: 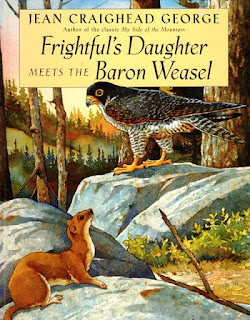