H is for Hawk by Helen Macdonald 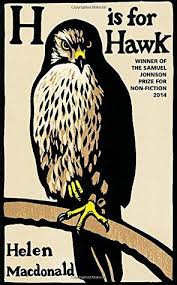 I finally got to read this one!
It is amazing!!

I had no idea!
I just knew I had to read it,
given all the people who have loved it!

I admit to being a bit surprised at the writing style.
Certain portions resemble academic writing.
I was very pleasantly surprised that so many other readers
found it so easy to read and loved it so much! Cool!
Although I've never had the slightest bit of interest in falconing myself, or 'manning' a hawk, I found the details fascinating! Helen's analysis of White's writing and own 'manning' and training experiences added to this compelling read. Though I do admit to a bit of angst and jealousy aimed at Helen for (1) having her biological father in her life, and (2) having had a close and enjoyable relationship with said father. I never met my biological father and he died over 17 years ago. All that aside, I did not envy her adjustment to life without him...that was tough! I guess the closest I've come to the immensity of her father's loss was losing my grandmother, who in reality was my main caregiver throughout childhood. (For which I will be eternally grateful!) I could relate to Helen's grief and displacement. No one experiences or powers through such situations in the same way. Though there may be some rather distinct "phases" of grief, there is actually no true sequence or set pattern each individual follows.
I felt odd: overtired, overwrought, unpleasantly like my brain had been removed
and my skull stuffed with something like microwaved aluminum foil,
dinted, charred and shorting with sparks. (3)..
Love this use of imagery! I could envision just how 'fried' she felt... (One of my favorite terms  to use to describe how I feel when exhausted!)

Macdonald explains that although it might appear from reading a book that goshawks are just larger than sparrowhawks, she elaborates:
No. In real life, goshawks resemble sparrowhawks the way leopards resemble housecats.
Bigger, yes. But bulkier, bloodier, scarier, and much, much harder to see. (4)
...you have a slightly better chance [to see them] on still, clear mornings in early spring,
because that's when goshawks eschew their world under the trees
to court each other in the open sky. (5)
Every animal seemingly loses its inhibitions for the possibility to mate, doesn't it? She also provides history and historical context:
...the qualities of goshawks were forgotten with the advent of Land Enclosure, which limited the ability of ordinary folk to fly hawks, and the advent of accurate firearms that made shooting, rather than falconry, high fashion. Goshawks became vermin, not hunting companions.
Their persecution by gamekeepers was the final straw for a...population already struggling from habitat loss. By the late nineteenth century British goshawks were extinct. (8)
Never let it be said humankind hasn't killed off more than its share of living beings. She goes into some detail regarding ecology and the changing countryside, how all this makes it ever more difficult for those not living in 'wilderness' areas to man a hawk since they must hunt and kill regularly. Definitely not a task for the 'faint of heart' to tackle!

...memories are like heavy blocks of glass. I can put them down in different places
but they don't make a story. (14)
This reflected Claudia's recognition in Moon Tiger that memories do not occur or resurface in any semblance of chronological or sequential order. It's true--we literally get bits and pieces here and there. And when a loss has been recent, those memories can literally stop us in our tracks. Sometimes we may start crying or perhaps we'll just feel the loss in our bones. There are many different physical/emotional reactions that can be experienced working through the aftermath of the loss of someone near and dear to us. I felt Macdonald's pain and adjustments as she described them--her writing is so detailed and heartfelt, as if her soul is exposing itself.

The kind of madness I had was...quiet, and very, very dangerous.
It was a madness designed to keep me sane.
My mind struggled to build across the gap, make a new and inhabitable world.
The problem was that it had nothing to work with. There was no partner, no children, no home.
No nine-to-five job either. So it grabbed anything it could. It was desperate... (16)
I was particularly struck by this passage. How can a 'madness' keep you 'sane,' I asked myself? Throughout much of the traumatic experiences during my adulthood I have had a partner (though the first one off 22 years was more of an emotional burden than not), and children, and a home, but I was especially grateful to be working full time which I believe helped save my sanity to a great degree. Routine. A sense of "normalcy." I can only imagine how much more difficult it might be if you didn't have any of these supports and structures to aid your coping mechanisms and recovery. Though I do believe such struggles to maintain a sense of "normalcy" make us much more empathetic to others and more appreciative of daily life overall so that once we've surmounted these challenges, we are more settled and happier overall. At least that has proven to be true for me.

The cure for loneliness is solitude. (32)
Macdonald includes this quote from the poet Marianne Moore and I love it. Yes, I believe that humans crave and in many ways mostly require at least a certain amount of interaction with others, but, especially in our 'modern world,' I believe most of us have truly lost the ability to be happy just being with ourselves. There is a huge difference between 'being alone' and 'being lonely.' Personally, I appreciate alone time and the older I get the more I appreciate it. I suppose I am much like my grandmother was in that respect. I remember thinking as a child that she lived much like a hermit with little social interaction outside of my mother and myself when we were home with her.

I found Macdonald's fascination with White to be...well...fascinating.

The book you are reading is my story. It is not a biography of Terence Hanbury White.
But White is part of my story all the same. I have to write about him because he was there.
When I trained my hawk I was having a quiet conversation of sorts,
with the deeds and works of a long-dead man who was suspicious, morose, determined to despair.
A man whose life disturbed me.
But a man, who loved nature, who found it surprising, bewitching, and endlessly novel...
he knew also that the world was full of simple miracles. (39)
For me, this is a summary of this book. Macdonald walks us through every painstaking detail of manning her hawk. I loved that she kept her "indoors and constantly in [her] presence, just as fifteenth-century falconers had done"--called watching. She describes that her well-honed observational skills are put to good use in this process.
I must have inherited being a watcher from Dad. (190)
Ah, I could so easily relate to this...this realization that something about you--your personality, your preferences, your behaviors--is recognizable in your memories of people lost to you who fulfilled such significant roles in your life. Her father was a photographer who was accustomed to patiently watching for long periods of time. For me, personally, I must have inherited the ability to be happy with myself--alone--from my grandmother, especially since my own mother never developed this part of her psyche. I believe it is these enlightening moments that give us comfort in the wake of a person's death or removal from our daily life.

Macdonald divulges that she spent the first few weeks of her life in an "incubator, full of tubes, under electric light," since she was so tiny. However, her twin brother wasn't as fortunate. He died soon after being born.

When I found out about my twin many years later, the news was surprising. But not so surprising. I'd always felt a part of me was missing; an old, simple absence.
Could my obsession with birds, with falconry in particular, have been born of that first loss? (49) 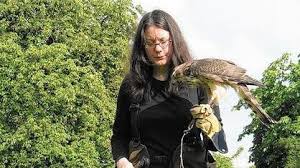 Upon learning of the intense and intimate relationship required to man a hawk, at least in the way Helen chose to do it, this made sense, as well as the fact that for her, the hawk allowed her to incorporate the outside world back into her life, albeit initially in a "hawkish"/"bird of prey" way! Reading of her insights to the world developed and used much as a bird of prey does was an amazing experience. I believe we tend to do this as we grow and develop--during different periods of our life we begin to 'see' the world through different lenses, if you will. And her ability to think and see like a hawk was a bit curious to me at first, and yet, it made total sense. She had immersed herself into the hawk's world, so of course she would develop this perspective. The first morning as she comes downstairs to her living room where Mabel sits,

The goshawk is staring at me in mortal terror, and
I can feel the silences between both our heartbeats coincide.
It feels like I'm holding a flaming torch. I can feel the heat of her fear on my face. (66)
What I am doing is concentrating very hard on the process of not being there. Here's one thing I know from years of training hawks: one of the things you must learn to do is become invisible. (67)
I could well understand this from taming barn cats. You must blend into the environment first, as if you really do not exist as a living being, just become 'invisible' to the other being. and then...
...came a decisive moment...it was thrilling...Regarding the room with simple curiosity, she turned her head and saw me. And jumped. Jumped exactly like a human in surprise.
[Through the glove] I felt the scratch of her talons and her shock, too, cold and electric.
That was the moment. Until a minute ago I was so terrifying I was all that existed.
But then she had forgotten me. Only for a fraction of a second, but it was enough.
The forgetting was delightful because it was a sign that the hawk was starting to accept me.
But there was a deeper, darker thrill. It was that I had been forgotten. (73)
Such an excellent demonstration of some of life's paradoxical moments. This animal must learn to overlook and forget you before she can get to know you, like you, even perhaps...care about or love you, at least to some degree. Perhaps for a hawk, it is the most that can be asked if she will learn to work together with you as a hunting team. For that is the goal! Although I could go on and on pulling quotes to exemplify Macdonald's excellent writing skills, per my viewpoint, I will stop here.

For further information about Helen from Helen, here is an ABC interview.

Suffice it to say, this is one of the most heartfelt and genuine reading experiences
I have had in a very long time.
I believe it is in Macdonald's lack of trying to "entertain" that she succeeds
so well in pulling the reader into her life, warts and all!
I encourage you to give this one a try if you're at all interested!

Whether you have an interest in hawks or falcons, I don't believe this book will disappoint!

Did you know you can download John James Audubon's prints?
Neither did I. Here is the link...and...they are free!!
Absolutely amazing!
Posted by Lynn @ Smoke & Mirrors at 1:07 PM